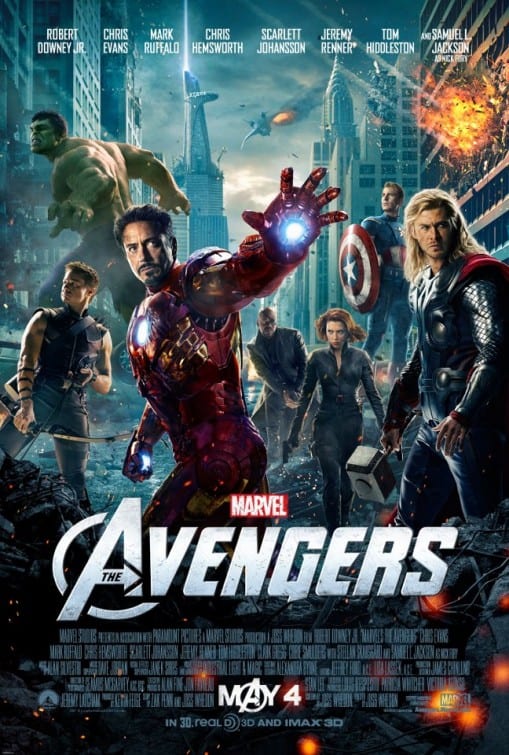 The arch-villain Loki (Tom Hiddleston) is back in The Avengers, and this time he’s got more than a few new tricks up his sleeve, one of which is a legion of intergalactic soldiers. To combat the threat, S.H.I.E.L.D. director Nick Fury (Samuel L. Jackson) assembles an unlikely group of superheroes, in the hope that they’ll transcend their vast differences and become greater than the sum of their parts.

For the uninitiated, there’s Captain America (Chris Evans), the patriotic super soldier with an indestructible shield, Iron Man (Robert Downey Jr), a corporate billionaire playboy genius with a suit that has the firepower of a small army, Thor (Chris Hemsworth), a demigod (`nuff said), and Dr Bruce Banner (Mark Ruffalo) aka The Hulk, who has anger management issues and turns big, green and very mean. Rounding up the cast are a pair of S.H.I.E.L.D. agents, the cool-headed archer Hawkeye (Jeremy Renner), and Natasha Romanoff (Scarlett Johansson), dubbed The Black Widow for rather obvious reasons.

While we of little faith did have some preliminary concerns regarding the number of superheroes crammed into The Avengers, we’re happy to report that the film is laudably streamlined, with adrenaline-pumping action sequences interspacing the character development. Director Joss Whedon plays on the highly contrasting personalities of the superheroes to both comic and emotional effect, and milks his star-studded cast for all they’re worth.

Stellar dialogue is usually the least one expects from an action-packed superhero movie. In this case however, Whedon displays a ear for a finely-tuned script. We opine that the best lines go to Robert Downey Jr, with his sardonic portrayal of Iron Man, although those who feel that actions speak louder than words would dispute that Ruffalo’s green behemoth is a worthy contender (the words `puny god` come to mind).

The contrasting personalities of the superhero pantheon makes not only for some amazing action, but also for equally memorable chemistry, most riveting of which would be the clash of ideals between the patriotically-minded Captain America and his cynical counterpart, Tony Stark. There are also some humourous moments between Thor and The Hulk that’s bound to have Marvel fanatics in stitches.

Loud, spectacular and filled with non-stop action, Marvel’s The Avengers is quite simply the archetypal superhero film. It’s unlikely to make converts of those who dislike the genre, but for the rest of us closet comic book junkies, this one’s a film well worth assembling for.