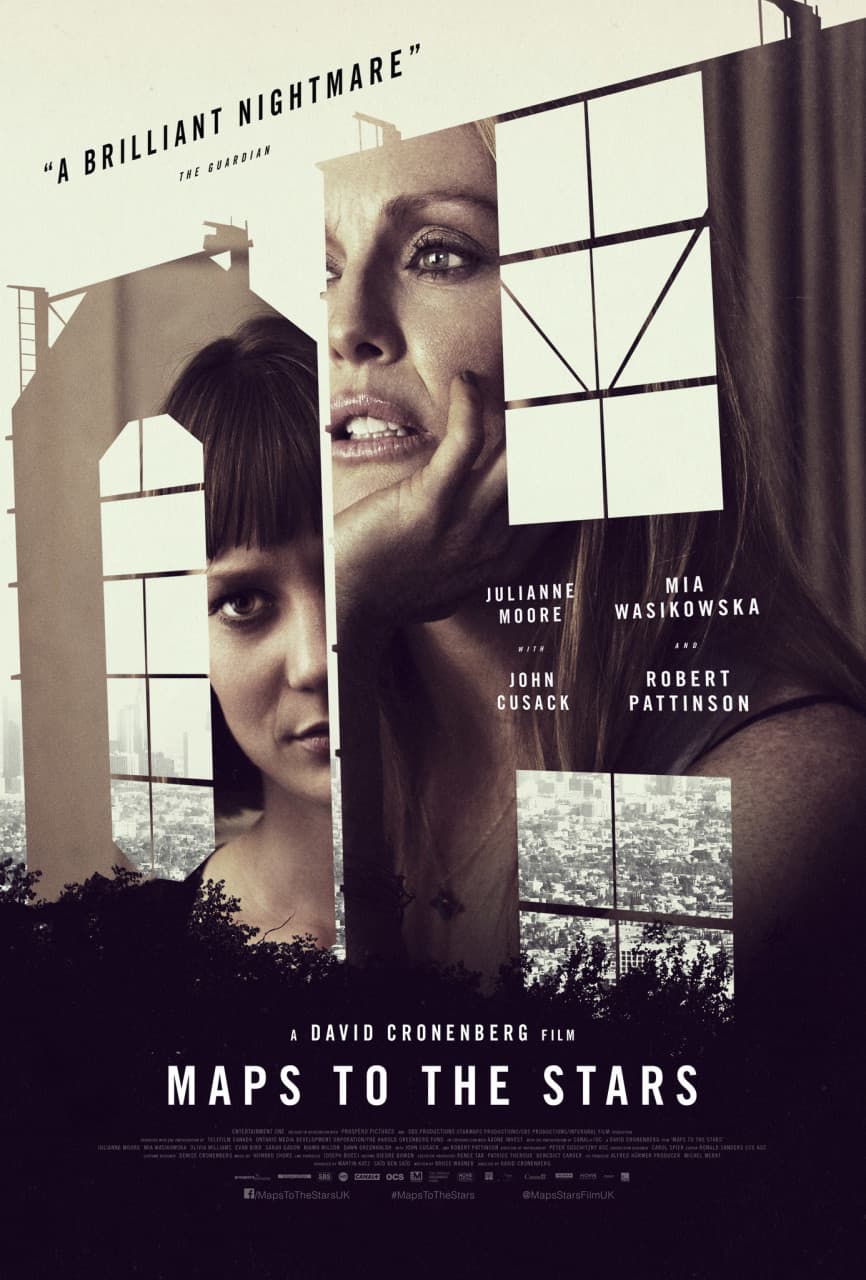 What makes for a good horror movie? Most Hollywood studios would have us believe it’s a combination of guts and gore, blood and screams, and winsome damsels in distress. David Cronenberg begs to differ. On the surface, Maps To The Stars is a satirical indictment of the excesses of Hollywood – the joke is on all of us, for worshipping celebrities in the increasingly terrifying way we do. Dig a little deeper, however, and it becomes clear that Cronenberg is hinting that true horror lies within each of us: in the people we are, the people we have allowed ourselves to become, the people we are born with and the ones we are trapped by. 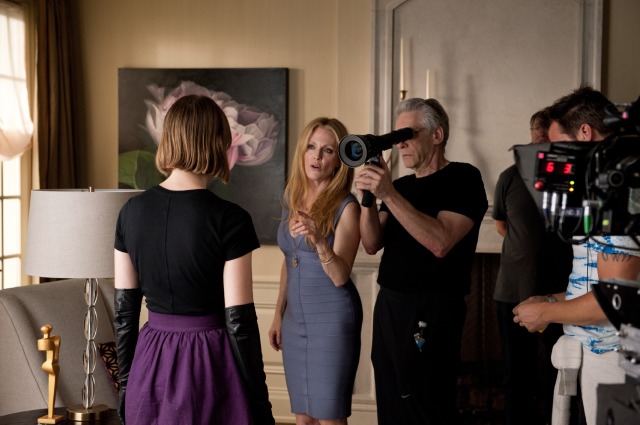 In Hollywood, practically every other person you meet is an actor plying his or her trade. There’s Havana Segrand (Moore), an aging actress desperate to star in the remake of a film that made her late mother a cult legend. Benjie Weiss (Bird) is a child star struggling with drug addictions and hallucinations, forced by his mom Christina (Williams) to make a sequel for financial reasons. While trying to hit it big, Jerome Fontana (Pattinson) works as a chauffeur-for-hire – which places him squarely in the orbit of Agatha (Wasikowska), an odd girl who claims to be friends with Carrie Fisher and becomes Havana’s personal assistant.

In its first half, Maps To The Stars can feel a little aimless. With Cronenberg taking his time in splicing his characters’ messy lives and huge egos together, the film drifts restlessly through soundstages, clubs and restaurants – seeming to be interested only in taking potshots at Hollywood and its cult of celebrity worship. 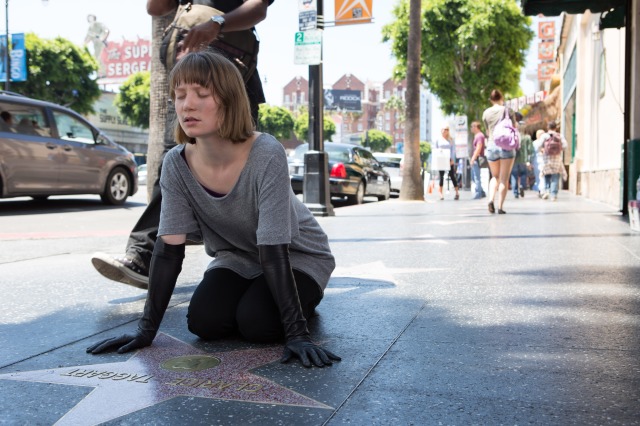 But, even though its narrative has yet to properly kick in, this is actually the most electric and enjoyable part of Cronenberg’s film. Bruce Wagner’s screenplay crafts a ghoulish nightmare of Hollywood with bleak, malevolent acidity, and populates it with characters who are both monsters and victims of their own fame and fortune. Havana grandstands through her life, throwing tantrums at her agent and suffering a crisis of confidence during an illicit tryst in the bedroom. Benjie callously meets a dying fan in the hospital without even knowing or caring what she’s suffering from, while his dad Stafford (Cusack) peddles self-help books urging people to reach for the stars.

Small wonder, then, that each character winds up plagued by ghosts and demons – whether of their own making, or the ones buried in their pasts that simply won’t go away. Havana is tortured by the spectre of her horrible mother, Clarice (Sarah Gadon), frozen forever in celluloid at her youngest and most beautiful. Benjie is haunted by the little girl from the hospital, while Stafford and Christina struggle with a deep, dark family secret that could ruin all their lives. There is plenty of depth and darkness to ply here, and Cronenberg does so with an almost chilly precision, finding the misery and madness that tugs at each of his characters. 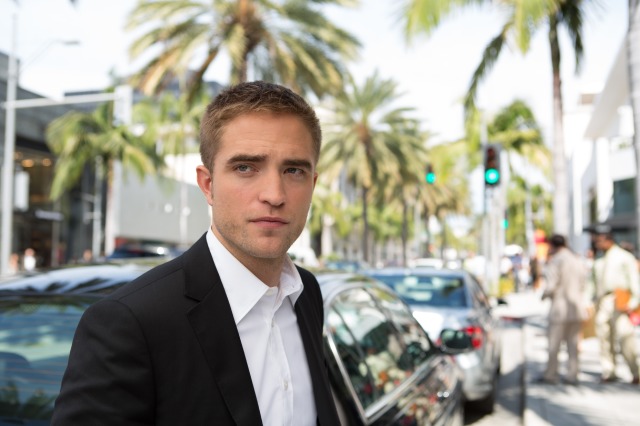 Ironically, it’s precisely when its story begins to make more sense that Maps To The Stars comes somewhat undone. The clever, biting satire of the first act slowly gives way to a Gothic melodrama straight out of a V.C. Andrews novel. As ever darker secrets are revealed, tension dissipates and the film winds up teetering very close to the brink of cheesiness. Cronenberg is master enough of his craft to wring a few truly shocking moments out of the twists in the tale, largely by allowing much of the film to play out against a soundtrack of stifling silence. But the final act of Maps To The Stars – and, indeed, its final frame – is not half as disturbing as it’s clearly intended to be.

What is disturbing, in a very good way, is Moore’s utterly vanity-free performance. She proves once again by slipping into the bitter, grasping skin of Havana Segrand that she’s one of the bravest and most fearless actresses of her generation. In a role that strips her of her dignity and sets her up as a monster, the kind who dances with abandon at the abject misfortune of others, Moore still manages to find a broken vein of humanity within her character. Wasikowska, meanwhile, plays Agatha with her characteristic unreadability, and Cusack and Williams mine a little depth from their sadly underwritten characters. It’s hard to tell, though, if Bird’s almost awkward stiffness in his role is intentional or merely unfortunate. 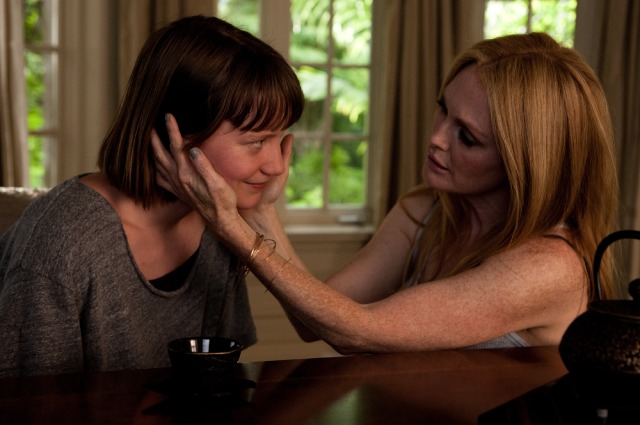 Part satire, part melodrama and part horror movie, Maps To The Stars tries valiantly but doesn’t quite succeed in weaving a coherent whole out of its many parts. The film also doesn’t end on as high a note as it begins. Even so, Cronenberg has quite enough skill – and the story enough morbid depth – to make it a riveting watch from start to finish.

Summary: A brave, arresting mix of ideas, though it does get a little lost along the way.