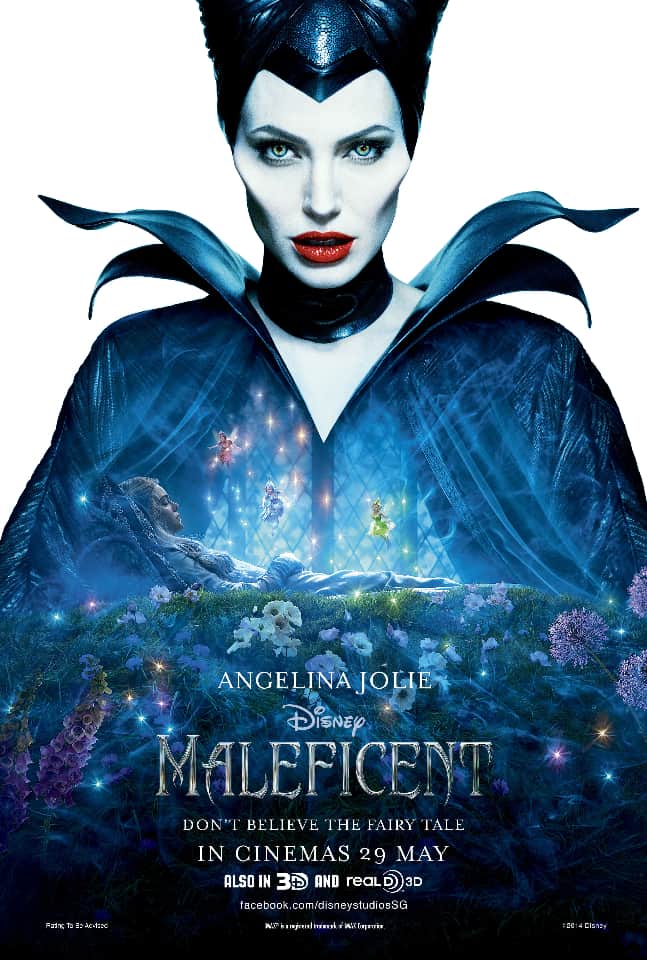 So much happened before Aurora dropped in. In Maleficent, we learn the untold story of the title character, hitherto thought of as just the dastardly villain from Sleeping Beauty. In her youth, Maleficent (Jolie) befriended and later fell in love with Stefan (Copley). But the gulf between Maleficent’s home, the enchanted forest kingdom of the Moors, and Stefan’s, the human kingdom, proves to be too wide. Stefan eventually becomes the king and betrays Maleficent. When King Stefan’s daughter Aurora (Fanning) is born, a scorned and heartbroken Maleficent casts a spell on her: if Aurora pricks her finger on the needle of a spinning wheel before her 16th birthday, she will fall into a deep sleep and only true love’s kiss can wake her. As three fairies (Staunton, Temple, Manville) watch over Aurora, so does Maleficent – from a distance, and with the aid of her loyal raven Diaval (Riley). Slowly, Maleficent’s hate towards the child softens, just as King Stefan declares war.

After one John Carter/Lone Ranger too many, one hopes that Disney will realise that this is the direction in which their live-action blockbusters should proceed. In telling a villain’s back-story, there’s always the danger of the mystique and menace of said villain being stripped away – just look at Darth Vader/Anakin Skywalker. It’s handled far better here and Maleficent makes the ideal candidate for a “perspective flip” retelling because Aurora is just about the most boring Disney princess of them all, and it was always Maleficent who was more fascinating. The screenplay by Linda Woolverton and an uncredited Paul Dini has an appealing fairy-tale logic to it; imps, fairies and enchanted forests existing in the same story as a protagonist who cannot be squarely categorised as either “hero” or “villain”. We live in a post-Loki world, and as a sympathetic character whose path towards the dark side makes sense, Maleficent is very much like Loki – right down to the trickster streak and those horns. 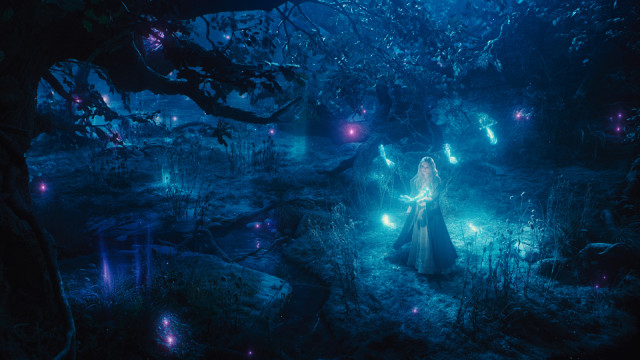 Robert Stromberg, production designer on Avatar, Tim Burton’s Alice in Wonderland and Oz: The Great and Powerful makes his feature directorial debut with Maleficent. Many design touches from those three films are evident here and while the aesthetic may not be unique, it is undeniably beautiful. Yes, the film is heavily reliant on computer-generated imagery, but there’s still life and soul to the CGI (especially the character animation on Diaval the shape-shifting raven) and the backdrops do not dissolve into generic digital mucilage. Anna B. Sheppard’s costume design work is impeccable; the translation of Maleficent’s animated look into a live-action context particularly effective. It’s at once immediately recognisable and also inventive; how she has different coverings for her horns depending on the seasons is a nice touch. And of course, Oscar-winning makeup artist Rick Baker’s work completes Angelina Jolie’s transformation into the character, horns, severe cheekbones and all. 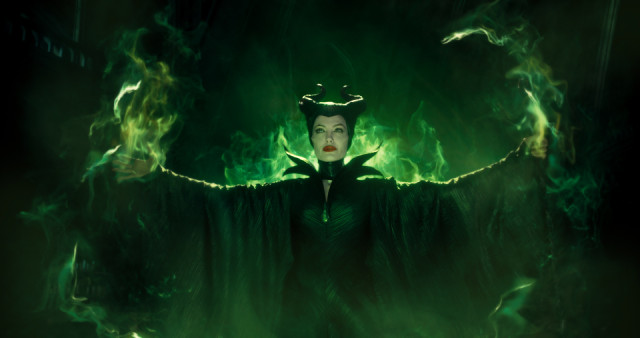 We don’t throw the word “perfect” around here too often, so believe us when we say Angelina Jolie is perfectly cast. She’s proven that she’s great at vamping it up, that she has the dramatic chops and that she can command the screen, all skills she calls upon for Maleficent. From the way she intones lines such as “a grand celebration, for a baby. How wonderful” to her calm, steely gaze to the way she tilts her head back at just the right angle, it proves to be quite the casting coup. The way the character is made sympathetic might not sit well with those who love Maleficent for being “the Mistress of All Evil” but this reviewer likes the layers Jolie brings to the part, in addition to how much she is enjoying herself as Maleficent. Elle Fanning doesn’t have to do much as Aurora because this really isn’t her story, but her wide-eyed naïveté is believable. Angelina Jolie’s real-life daughter Vivienne plays Young Aurora; the scene in which Maleficent interacts with her disdainfully is even cuter once you realise that’s just a toddler playing with her mother. 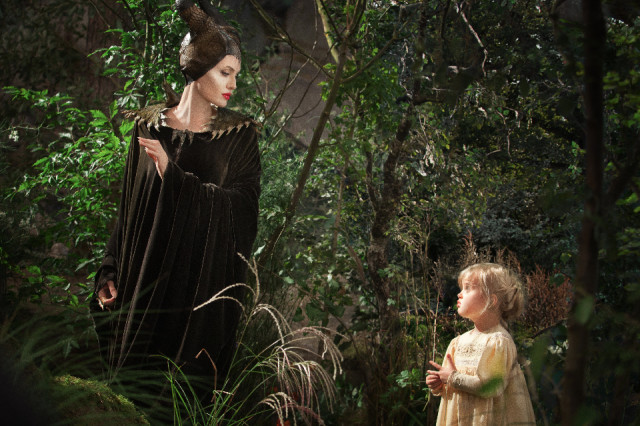 South African actor Sharlto Copley is deservedly climbing the A-list, and he’s good here as well, playing a king who gradually descends into madness and who is consumed by an obsession with the menacing winged creature he once loved. Imelda Staunton, Juno Temple and Lesley Manville provide the comic relief as the three bickering guardian fairies – they’re amusing if not slightly grating and the CGI versions of them do teeter over the uncanny valley. Brenton Thwaite’s Prince Philip is pretty much an afterthought but hey, he’s handsome. Sam Riley handily steals the show as mighty morphin’ bird Diaval (known as Diablo in the 1959 film). He may not look it, but Diaval is easily the most adorable an “evil minion” can get without a being yellow, overalls-clad, goggles-wearing capsule.

Hardcore Disney animation fans will be pleased to know that the late Marc Davis, one of the revered “nine old men” and the supervising animator for Maleficent, Aurora, Diablo and other characters in 1959’s Sleeping Beauty, is thanked in the credits. Darker, “Grimmified” takes on fairy tales have become something of an eye roll-inducing Hollywood trend, but Maleficent manages to soar above the pack thanks to a compelling turn from its wonderfully-cast lead. Sweeping classical imagery that includes Maleficent breaking through the clouds to bask in the sun’s glow and Diaval in horse mode rearing up on his hind legs as the sun sets behind the castle enriches the experience too. In many ways, the film is much like Lana Del Rey’s cover of “Once Upon a Dream” that plays over the end credits: an effective reinvention of something familiar but one that lovers of the old-fashioned approach might not necessarily enjoy completely. 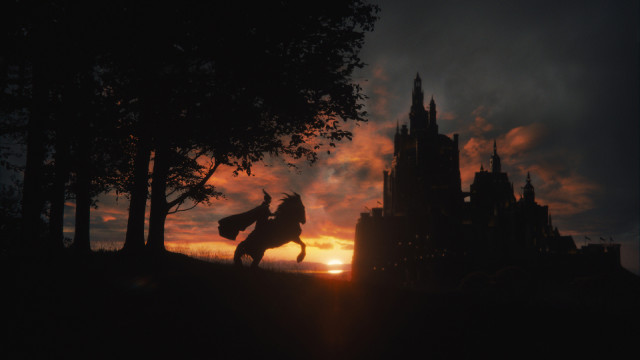 Summary: Those tired of blockbuster re-imaginings of time-worn fairy tales might not be won over by Maleficent, but Angelina Jolie’s stunning performance, in addition to some lush, awe-inspiring visuals, make this one worthwhile.