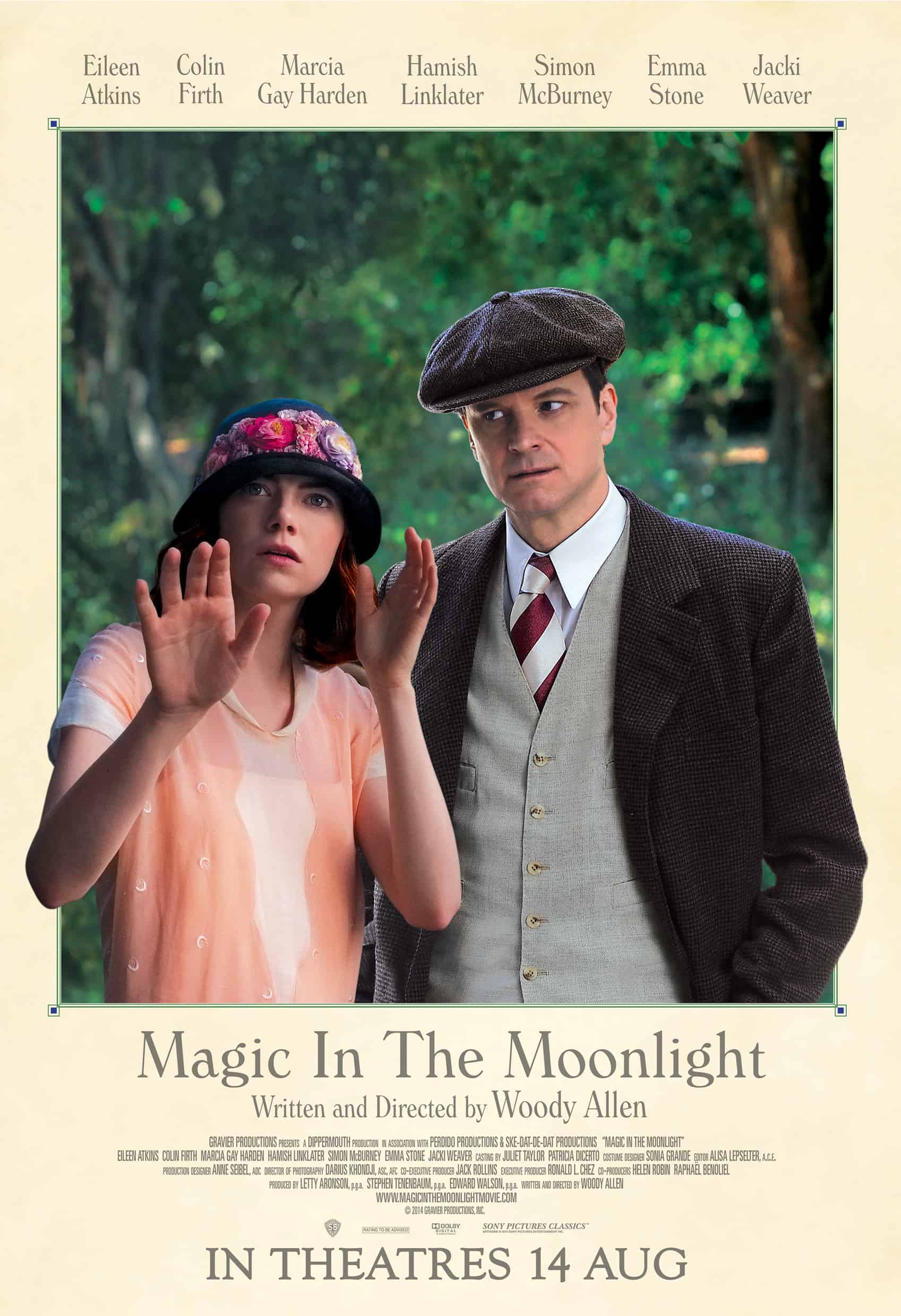 Say what you will about Woody Allen – especially in light of recent and enduring controversies – but, when he’s at the top of his game, few other film-makers can produce films that are simultaneously as deeply thoughtful as they are blithely entertaining. Even fans would admit, however, that the films he churns out with clockwork regularity are less hit than miss these days – barring the surprising, shattering depth of last year’s Blue Jasmine. His latest effort, Magic In The Moonlight, should delight many of his fans: it features, as always, a top-notch cast trading witty, sarcastic dialogue to the tune of a jazzy soundtrack, as Allen juggles romance and love with philosophy and cynicism. But the final film feels more familiar than fresh, the love story dictated to us rather than unfolding organically as the best ones really ought to do. 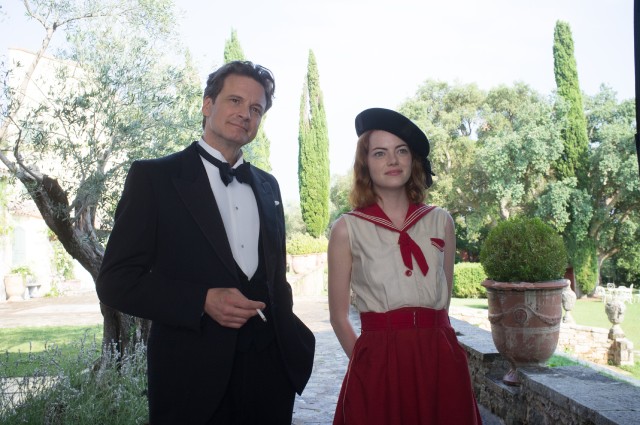 Stanley (Firth) is a curmudgeon who has long ago given up on any such foolish notions as magic, religion or the supernatural, instead viewing the world and everyone around him through bluntly cynical, utterly rational eyes. Ironically, he’s a magician by trade – the great Wei-Ling Soo of the Orient – who makes his living out of everybody else’s desire to believe in something more than their eyes can see. He’s summoned by his friend and occasional rival Howard (Simon McBurney) to debunk the work of purported psychic Sophie (Stone), a young American girl who was allegedly born with an unassailable link to the spirit world. Stanley is convinced he will rout Sophie out in short order; instead, he finds his personal and professional convictions rocked to their foundations whenever he is with her.

For anyone unfamiliar with Allen’s bundle of neuroses, Magic In The Moonlight might prove to be a delight. Unlike many other vapid romantic comedies, it deals with darker, more existential issues as a matter of course. Stanley, for all his grouchy surliness, is intelligent and considered, a man who stands in stark contrast to Brice (Linklater), the millionaire buffoon who’s utterly enamoured of Sophie and courts her solely by playing her love songs on his ukelele. He asks difficult, intriguing questions about life and love, and the presence or lack thereof of magic and spirituality in the world. At its heart, the film is about the limit of logic. After a point, thinking things through rationally removes whatever joys and tiny amounts of magic we might be able to find in lives otherwise inclined to be sombre and miserable. It’s all very much in keeping with Allen’s worldview: a strange mix of the innocent and the cynical, the idealistic and the pessimistic. 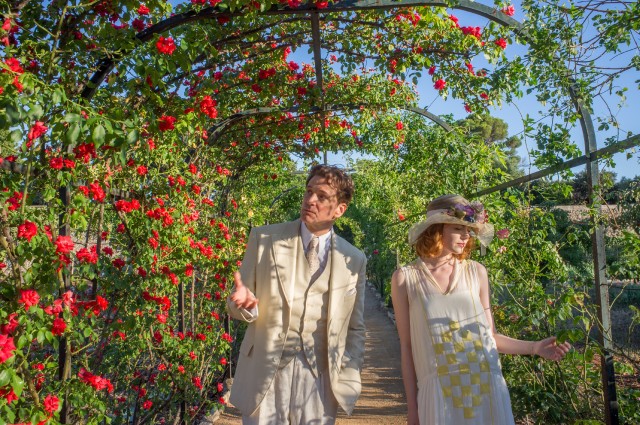 But Allen’s best films, all revolving around the same themes of the unlikeliness, irrationality and undeniable value of love in the face of death, never plod by in the way Magic In The Moonlight frequently does. This is, in effect, Allen on auto-pilot: telling us what to think and who his characters are, rather than showing us. Stanley and Sophie trade banter with wit and verve along the sun-dappled French coastline, but they never really seem to connect in the way the film badly wants them to. It’s also not hard at all to puzzle out the twist in the narrative, and it becomes increasingly difficult to abide by the way in which everything resolves itself. Would a man as prideful as Stanley be brought to his knees in as many ways as he is in the film? Allen insists that the answer is yes, but doesn’t give us much reason to believe it.

This is by no means Firth’s fault – he is, in fact, the film’s main saving grace. He might be soldiering his way through a second- (or third-)rate Allen script, but you’d never know it. He plays Stanley’s prickly, abrasive personality with just the right hint of humanity: finding within the man’s huge ego and almost crippling logic the vulnerability of a life lived without the benefit of magic. He sells for all he is worth a scene in which Stanley rails at a God in whom he has never believed, and makes it feel tantalisingly, heartbreakingly real. Firth also shares a wonderful chemistry with Eileen Atkins, the elderly actress playing Stanley’s charming aunt Vanessa, who just happens to be living in the French countryside. 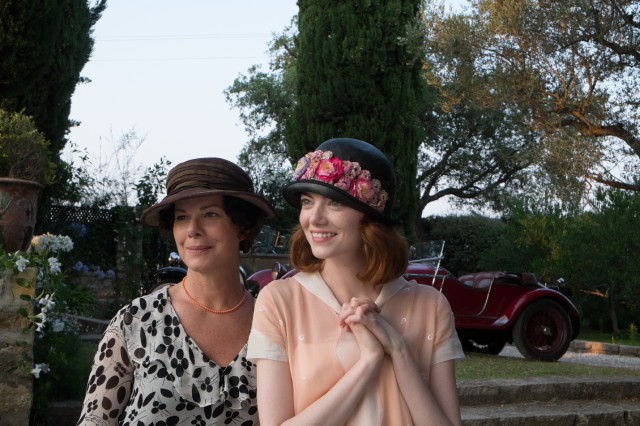 The rest of Allen’s cast does not fare quite so well. He relegates sublime supporting actresses like Marcia Gay Harden and Jacki Weaver to essentially walk-on parts as Sophie’s stage mom and Brice’s widowed mother respectively. Stone, so effortlessly charming and spunky, would seem to be a natural fit for Allen’s films, but she’s oddly out-of-place here. It’s partly the fault of the writing; Sophie is an opaque character at best, whose charms are less organic than incidental. Small wonder, then, that even Stone can’t quite fit into Sophie’s more awkward angles.

If it’s a smart, philosophical rom-com you’re looking for, Magic In The Moonlight might do in a pinch – though, on balance, it’s not hugely funny or enormously romantic, and its philosophy is earth-shattering only if you’ve been starved of intelligent thought by a steady diet of films starring Katherine Heigl. Otherwise, bypass it in favour of tender and considerably more magical films in Allen’s own oeuvre, like The Purple Rose Of Cairo.

Summary: Firth is magic, but the film he’s in isn’t quite so special.