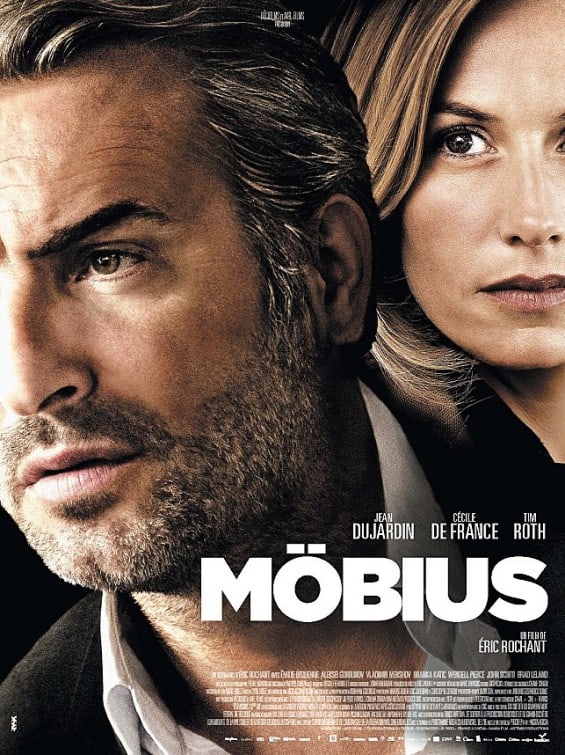 While monitoring the offshore activities of crooked Russian tycoon Ivan Rostrovsky (Roth), Russian secret agent Gregory Lioubov (Dujardin) talent-spots Alice Redmond (Cecile De France), a brilliant international banker so spectacular she was banned from working in America after the Lehman Bros scandal. Not realising that Alice is already working with the CIA, Gregory directs his team to recruit and use her to get closer to Rostrovsky. Inevitably, secrets and conspiracies pile up, with Gregory only complicating matters when he stumbles into a forbidden relationship with Alice.

There are a few moments and ideas that shine through Möbius, no doubt the ones that most inspired Rochant to construct a script around them. These come mainly in the relationship between Alice and Gregory – or Moses, as she knows him. Their connection is under-written, suggested more through soul-shuddering orgasms than what is technically in the script. Nevertheless, Dujardin and de France just about make it work, whether Gregory is brazenly deceiving his colleagues to answer a call from Alice or they’re sharing a final, quietly devastating scene together.

But their efforts are let down by an overly complicated plot, one that feels as if it doesn’t make much sense even when all is revealed. The motivations of every agency involved are murky at best. The CIA comes off the worst, its agents lurking stupidly through a handful of scenes as their ties with Alice ebb and flow in quite mysterious fashion. The Americans in the cast must also grapple with the unwieldy, soapy chunks of dialogue they’re given. As a result, the film loses steam when it should gain tension.

A Möbius strip, as a character explains quite late in the film, is a deceptively simple phenomenon. Half-twist a strip of paper, fasten the two ends together, et voila: something utterly simple rendered impossibly complicated – a never-ending loop, a two-dimensional model with only one surface. Rochant meant for the strip to be a metaphor for the dilemma in which his characters find themselves. It’s rather appropriate, though perhaps not quite how he intended it, that the strip also serves as an apt metaphor for the entire film.

Summary: Too complicated for its own good.