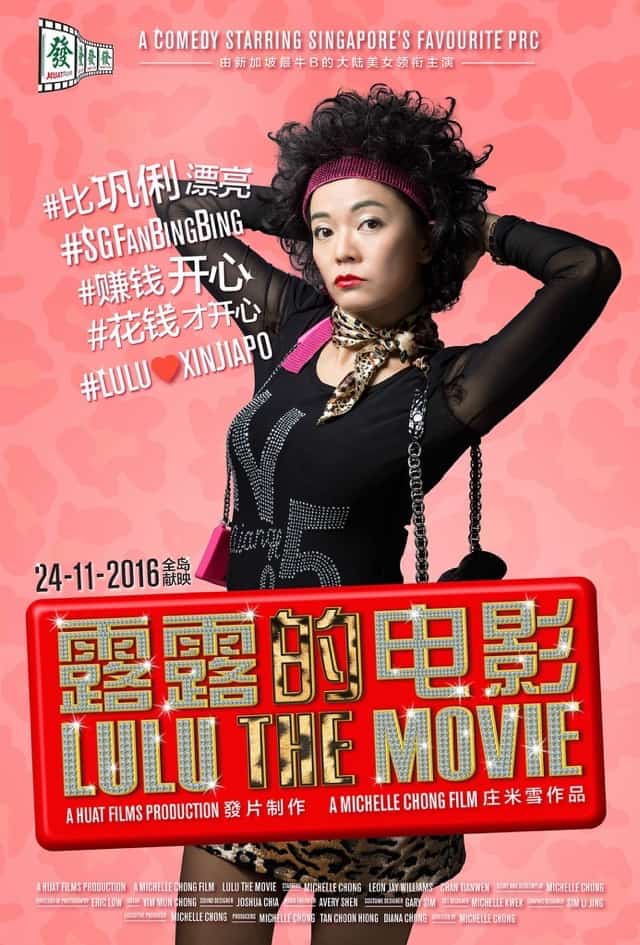 To borrow an unrelated line from a certain Mad Chinaman’s stage musical – “Everybody knows Lulu”. Indeed, thanks to the Emmy-nominated local satirical comedy television series The Noose, everybody is not only acquainted with but adores this caricature of the brazen Chinese PRC stereotype, made famous by the talented multi-hyphenated Michelle Chong.

After conducting a survey, the leopard-print wearing, big haired, loud-mouthed foreign talent actually came up tops as the most beloved character, beating out Barbarella and Leticia Bongnino amongst the many faces of Chong from The Noose. Inspired by this outcome and noticing the public’s preoccupation with Mainland Chinese immigrants, Chong announced back in February 2014 that she would be making her third directorial film project based on the hilariously annoying yet endearing China girl. After almost three years in the making, Lulu, like Liang Po Po, Auntie Lucy and Phua Chu Kang, finally makes her transition too from the goggle box to the silver screen in Lulu the Movie.

Bearing slight similarities to storylines of The Prince and The Pauper and Borat: Cultural Learnings of America for Make Benefit Glorious Nation of Kazakhstan, Lulu the Movie in a nutshell relates the misadventures of the titular character (Michelle Chong) who journeyed from her hometown China to Singapore in search of true love.

Disappointed when her dream lover Brad Pit (Chen Tianwen) that she met online via social media turns out to be a paunchy, uncouth boor, she falls instead for his handsome executive twin brother Leon (Leon Jay Williams). Although she soon got her heart broken upon realizing that Leon was embarrassed to date her owing to their vast difference in societal status and language barrier, the irrepressible Lulu was determined never to let life’s tough circumstances beat her down.

In spite of her hilarious bungles in job hopping and learning English, she eventually rose to glory and success when scouted by a TV station to replace Leon’s snooty and bitch of a girlfriend Sonia (also played by Chong) and headline her fashion programme. With her own unique brand of “fasionh” and English vocabulary, Lulu went on to daringly buck the trend of conforming to the conventional fashionista host mould to achieve success while staying true to herself and living life on her own terms.

There is no doubt that the star of the film is Chong. In fact, her show-stealing performance in the film is so outstanding that everyone else pales significantly in comparison. Whether its her signature armpits-airing pose or outlandishly exaggerated “chor lor” dance moves or side-splittingly funny direct phonetic translation from English to Mandarin wordplay humour, Chong had audiences roaring with laughter every other minute from the film’s start to finish. No mean feat and great kudos to Chong for delivering the goods despite juggling multiple roles as the writer, director and leading star. This is probably where the producers of The Noose are kicking themselves for ousting Chong and her other characters from the satirical TV series.

Despite its merits, this local film does have its few flaws. While it succeeded impressively in humour, it fell a tad short in heart. Unlike her directorial debut Already Famous, where Chong shared great onscreen chemistry with her male lead Alien Huang then, here however, apart from a few bashful glances, her chemistry with leading man Williams fizzles. In addition, with so much of the film’s focus being on its humour, the knotty love story between Lulu and Williams ended up like a non-consequential side-plot. It certainly did not aid matters either that the eventual conclusion to this romance felt like a flimsily thought-up and contrived cop-out, as compared to the gratifying heartfelt finale that Already Famous had.

Another rather glaring flaw of the film is its lack of attention to detail. In its second half, secondary cast members such as Chen’s Brad Pit and Chong’s other role as Sonia were conspicuously absent without any apparent explanation. Although understandably we are to suspend disbelief especially in the case of farcical comedies, but to have someone bestowed an honorary degree, a Datin title and Dame-hood all on the back of hosting a popular fashion programme and starting a fashion label is way too ludicrous. I mean, even fashion industry luminaries by the likes of Karl Lagerfeld (who was spoofed in this film), Coco Chanel and Anna Wintour, who have achieved way more than the fictitious Lulu did not even receive such status.

However, even with its few shortcomings, this reviewer feels Lulu the Movie exceeds and could even be considered to be the best local comedy to successfully transpose a satirical character from TV to film. Yes, Jack Neo, Dennis Chong and Gurmit Singh: consider yourselves trumped by the formidable fictional PRC that is Lulu. And yes, we are keeping our fingers tightly crossed for this film to pave the way for perhaps Chong’s other memorable characters of Barbarella, Adrianna Wow or Leticia Bongnino to make their way onto the silver screen soon, too.

Summary: Undeniably one of the best local farcical films to date, fans of The Noose who have missed Lulu, everyone’s favourite PRC in leopard print, won’t be disappointed with this uproarious comedy that will have audiences laughing from start to finish.