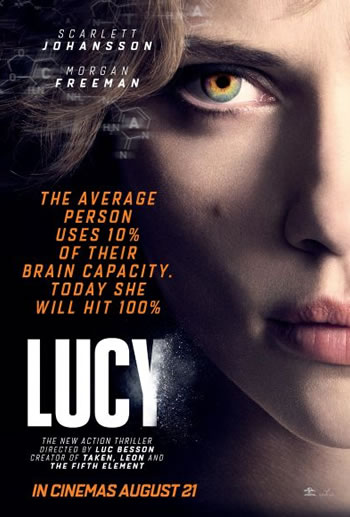 In the Marvel Cinematic Universe, Scarlett Johansson kicks a lot of ass as Black Widow but doesn’t have any actual superpowers to speak of. As the eponymous Lucy, she has all the superpowers. Just your average girl abroad, Lucy gets mixed up with the wrong crowd in Taipei and is made an unwilling drug mule for Korean crime lord Mr. Jang (Choi). Inserted into her abdomen is a packet of blue crystals known as CPH4. When the drugs enter her system following an encounter with some thugs, Lucy begins to tap into the unmined potential of her brain. She contacts Professor Samuel Norman (Freeman), the leading expert in this area. According to Prof Norman, humans use only 10% of their cerebral capacity. As the drug’s effects strengthen, Lucy inches towards optimizing 100% of her mind, giving her the power over her own body, the bodies of others and matter itself. As she heads towards omnipotence, omniscience and omnipresence, what’s next? 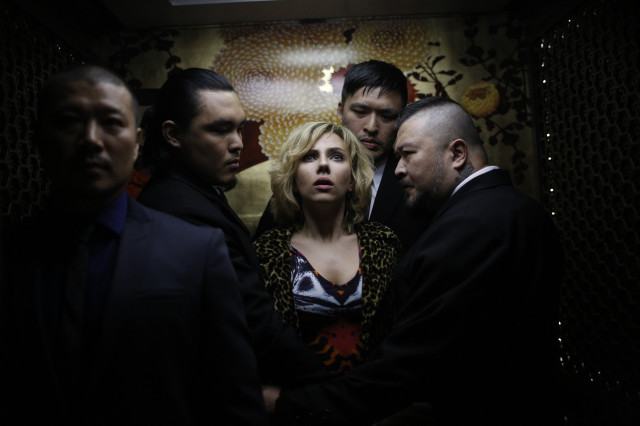 From The Messenger: the Story of Joan of Arc to La Femme Nikita to The Fifth Element and to a different extent The Lady, writer-director Luc Besson’s forte is making extraordinarily skilled, powerful women look awesome. He’s at it again in Lucy, with Scarlett Johansson stepping in the shoes once filled by a young Natalie Portman and Milla Jovovich. We’ll give Lucy this: it’s ambitious and it’s different. Besson could’ve been content with churning out a run-of-the-mill actioner and apparently, he isn’t. This strange beast of a sci-fi action fantasy flick has been only semi-facetiously compared to Terence Malick’s The Tree of Life. Mixed in with the requisite gunplay and car chases through Paris are scenes of an Australopithecus drinking from a prehistoric lake. This touch also imbues the name “Lucy” with extra significance.

Unfortunately, it is very often evident that Besson has bitten off more than he can chew. “Humans are concerned more with having than being,” Professor Norman says during an expository lecture. This sort of faux-portentous philosophising is served with a side of heavy-handed symbolism: Lucy being recruited for the delivery job in the beginning of the film is intercut with footage of a mouse approaching a mousetrap and of a cheetah hunting gazelles. Cue the eye-rolling. Sometimes, it’s hard to discern if Besson truly thinks this is a deep, contemplative masterpiece or if he is aware that Lucy is simply a gleefully silly romp. The answer to “life, the universe and everything” makes even less sense than “42”, the answer famously put forth in The Hitchhiker’s Guide to the Galaxy. And let’s not forget that the “10% of the brain” myth is discredited, misleading pseudo-science. 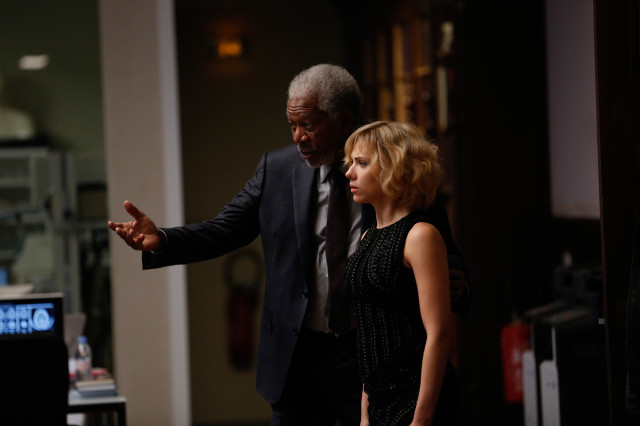 Johansson zones in as the superhuman Lucy and plays the transition from scared, naïve girl in over her head to single most powerful being in the world with entertaining élan. Lucy engages in more than a few morally dubious acts, but Johansson makes us cheer the character along regardless. Morgan Freeman once again does that thing he’s been doing lately: showing up in a movie to lend authority without doing any real acting. But hey, when you’ve got Morgan Freeman spouting all that techno-babble, it probably subconsciously lends it some credence. Choi Min-sik, Oldboy himself, is a suitably commanding presence as a downright scary career criminal who, after slaughtering a room full of innocent hotel guests, washes his hands with a bottle of Evian. Amr Waked is good as Captain Del Rio, the hapless cop dragged through Paris by Lucy as a “reminder” of her humanity. Fans of British TV will also get a kick of Julian Rhind-Tutt hamming it up as he forces the drug mules’ mission upon them. 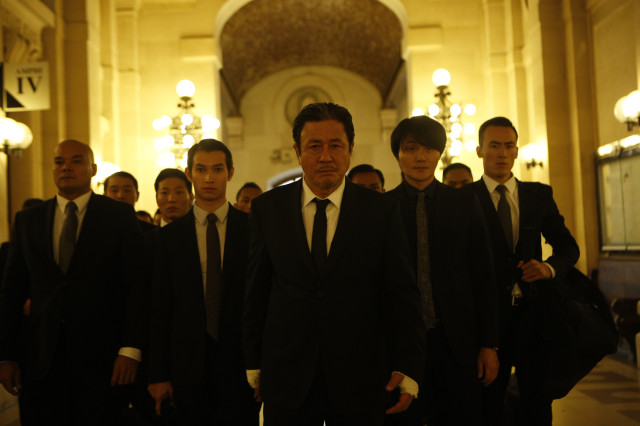 While a lot of it can be seen as wrongheaded and embarrassing, Lucy is very entertaining once the CPH4 is in her system and the plot gets into gear. There’s also lots of trippy imagery (strands of light over Paris! Shapeshifting arms! Nebulae in deep space!), created by Industrial Light & Magic, Rodeo FX and other visual effects houses. A scene set in an airplane is quite intense. Luc Besson’s regular cinematographer Theirry Arbogast and composer Eric Serra make the film a rather sumptuous sensory feast, in a way different from the biggest, most explosive blockbusters out there.