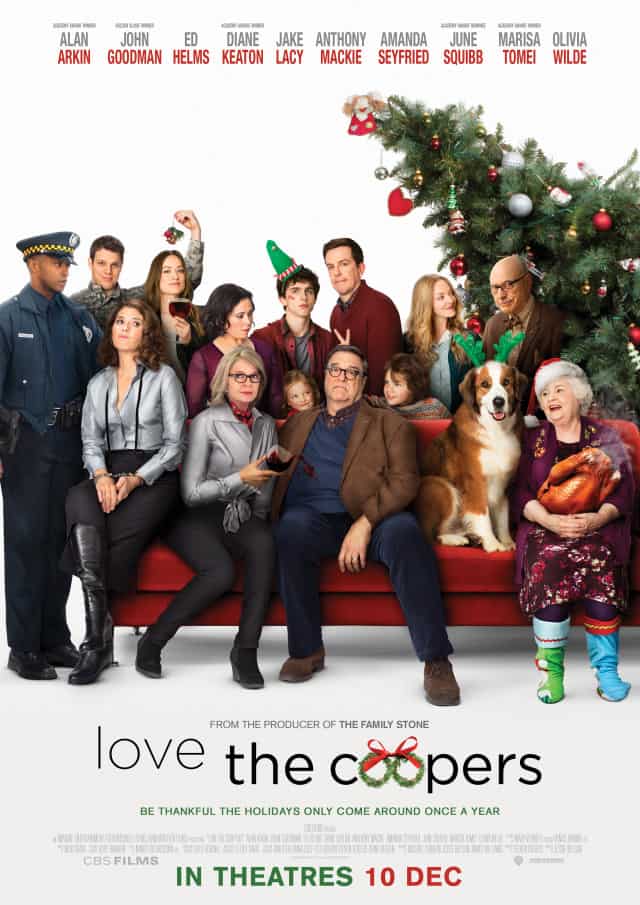 Family reunions are often occasions when grinning and bearing it is the order of the day. This Christmas comedy-drama follows four generations of the Cooper clan as they reunite to celebrate Christmas as one big, not-so-happy family. Sam (Goodman) and Charlotte (Keaton) have been married for 40 years but are on the brink of calling it quits, both reluctantly agreeing to put on a brave front for everyone coming over. Their son, Hank (Helms), is recently divorced from Angie (Borstein) and is looking for a job, having to provide for his kids Charlie (Timothée Chalamet), Madison (Blake Baumgartner) and Bo (Maxwell Simkins). Hank’s sister, Eleanor (Wilde), a struggling playwright, meets military man Joe (Lacy) at an airport bar and they kind of hit it off. Meanwhile, Charlotte’s sister, Emma (Tomei), gets arrested for shoplifting by Officer Percy Williams (Mackie). Grandpa Bucky (Arkin) befriends diner waitress Ruby (Seyfried). Christmas dinner doesn’t go according to plan, as a series of events unfolds – events that could drive the family further apart or bring them together in the spirit of the holiday. 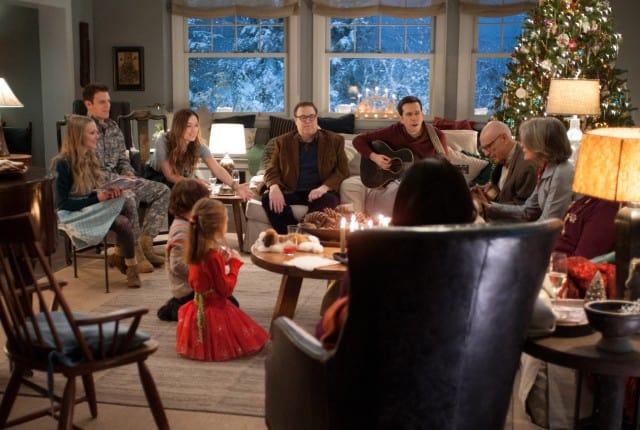 Every Chinese New Year, we get star-studded comedies like All’s Well That Ends Well, with posters that have Andy Lau, Chow Yun Fatt, Cecilia Cheung or Carina Lau grinning and holding their chopsticks up in the air. Well, Hollywood has movies like Love The Coopers. This is the kind of film that one can bring Grandpa and Grandma to during the holidays and it’s meant to please everyone, naturally pleasing nobody in the process. The goings-on are at once mundane and over-the-top, with the Coopers depicted as dysfunctional in a relatively pedestrian manner. Before everyone gets together a little after the halfway mark, the film flits from character to character, stringing the vignettes together. Every line of screenwriter Steven Rogers’ dialogue sounds like stock romantic comedy-drama drivel and it’s altogether very cloying and syrupy. There are attempts to temper this with some cynicism, but it seems like Rogers and director Jessie Nelson are constantly asking themselves, “We can be a little bitter here without alienating all the grandparents, right?”. 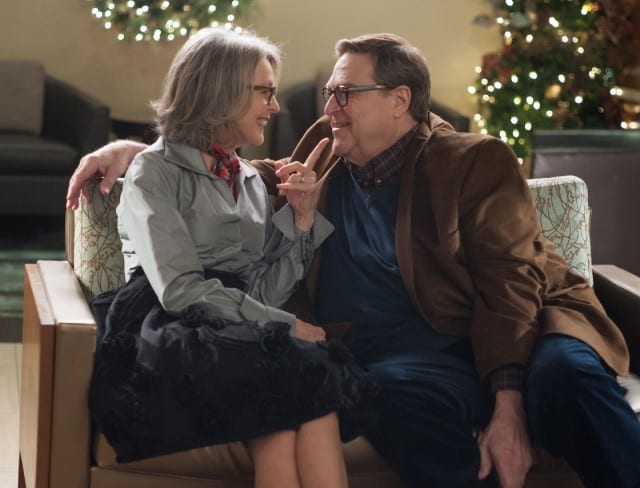 We’re going to dust off that old chestnut one hears whenever there’s a movie that entirely wastes the collective talents of its cast: “Imagine what Robert Altman could do with these actors.” Indeed, the collective wattage of the star power could eclipse even the Star of Bethlehem itself. Love The Coopers manages to be tolerable in the slightest because many of the actors are innately watchable, Goodman in particular. While he and Keaton are believable as a squabbling elderly married couple, the material is still very rote. At one point, Sam even asks Charlotte, “What happened to us?”. Excuse us if we can’t gather up the sympathy. There are flashbacks to every single character when they were kids and it feels more like a cheap heartstring pull than a worthwhile storytelling device. 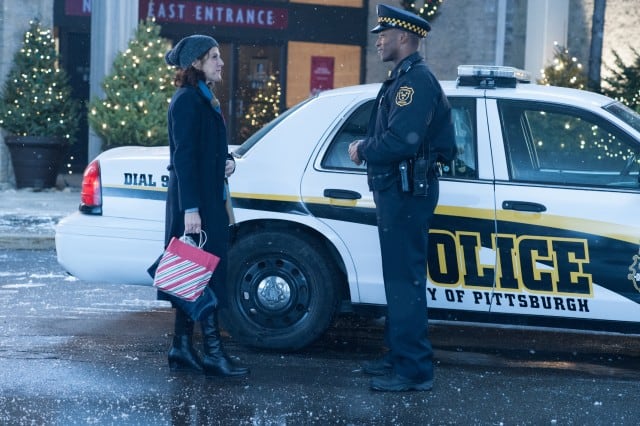 Wilde and Lacy have decent chemistry and there is a degree of development to their relationship, even though it is heavy on the “Oh, he’s a Republican and she’s a Democrat!” jokes. Tomei is shrill, and casting the usually engaging Mackie as a stoic police officer and the token black guy is a crying shame. Arkin mopes about and looks sad a bunch with Seyfried playing opposite him as the diner waitress anyone would have a crush on. There are hints of romance in their interaction, which, given the 52-year age difference, is creepy in spite of both actors’ best efforts. Helms is pretty much a non-entity and Squibb is the doddering senile aunt whose dementia is played for laughs. While nobody is sleepwalking through the movie per se, it’s obvious that Love The Coopers demands precious little from its cast, literally half of whom have won or been nominated for Oscars. 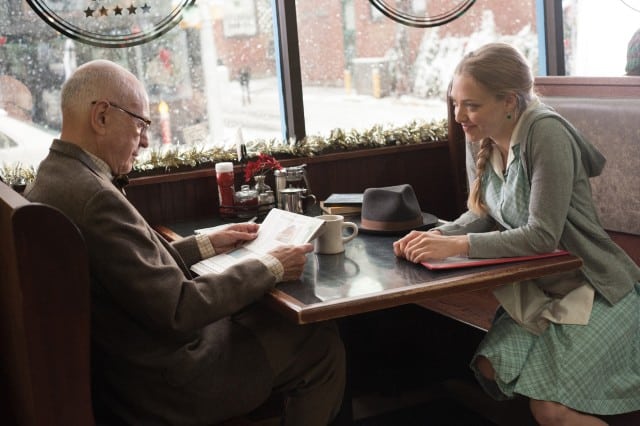 While Love The Coopers isn’t an insufferable gag-heavy Christmas comedy in the Deck The Halls mould, it still provides plenty of cringeworthy moments. All of this is tied together by painfully on-the-nose narration by Steve Martin, with an end reveal as to the mystery narrator’s true identity that is worthy of an almighty eye-roll. This isn’t one of those films that’s joy and cheer from start to finish, and it does take stabs at drama, albeit very ham-fisted ones. Make no mistake, with the fluffy St. Bernard and the adorable moppet granddaughter, this is still engineered to have a maximum “aww” factor, and that’s going to make a significant portion of the audience throw up in their mouths a little. It’s not even cheesy and corny in an endearing, old-fashioned manner. Love the Coopers oozes insincerity and sitting through it ends up being quite like being forced to spend the holidays with relatives you’re not entirely fond of. 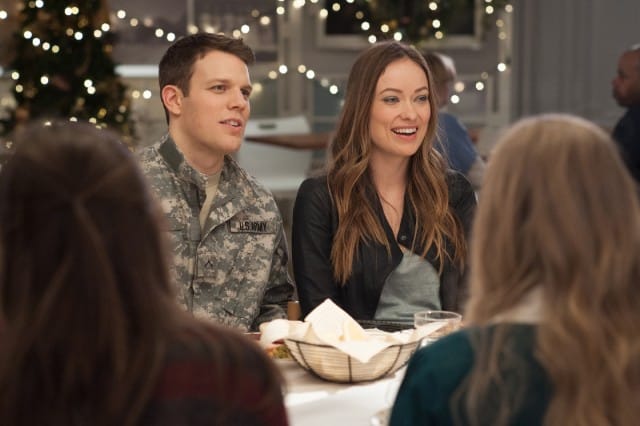 Summary: A monumentally talented cast by any standard is entirely squandered in this schmaltzy holiday flick, which repeatedly attempts to trick us into thinking it’s making wise observations about family. 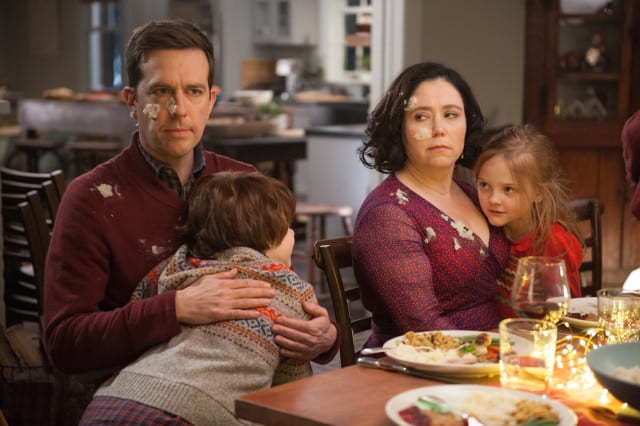