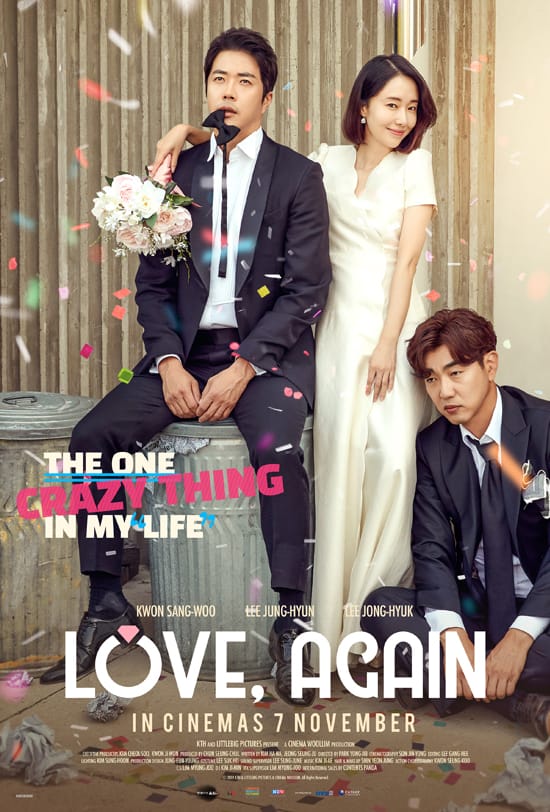 The Low-Down: Among the usual Korean rom-coms featuring young and attractive actors, Love, Again 두번할까요 turns to older (but still attractive) leads. And who would have thought that a divorce story could turn out to be quite an entertaining premise? Director Park returns with Lee Jong-hyeok for their third collaboration, along with two bigger names — Kwon Sang-woo and Lee Jeong-hyeon. Love, Again has some interesting messages but falls a little short in terms of plot development and execution.

The Story: A married couple Hyeon-woo (Kwon, The Accidental Detective 탐정: 더 비기닝 series) and Seon-yeong (Lee, Jeong-hyeon The Battleship Island 군함도) plans a divorce ceremony on a whim because of a series of conflicts, embarrassing themselves and ending the marriage on a bad note. When Seon-yeong starts dating Hyeon-woo’s old buddy, Sang-cheol (Lee Jong-hyeok), matters start to get complicated and awkward. The ex-spouses go through a journey of understanding their own feelings and slowly mature while getting into hilarious situations.

The Good: Who would have thought of a remarriage story for a rom-com? Innovative and ridiculous as it sounds, Love, Again manages to pull the premise off. Props to Kwon and Lee Jeong-hyeon for the convincing looks in their eyes every time they’re in the same scene, conveying the longing yet stubbornness of exes still in love with one another. Except for a few missteps, director Park and crew are mostly on point for the funny and touching scenes, making the movie entertaining and worth the 112 minutes.

The Not-So-Good: The set-up for Seon-yeong’s (mandatory) love interest, Sang-cheol, is a little forced at best and quite poorly executed at worst. Adding Hyeon-woo’s relationship with Sang-cheol in the mix with the intention to tie all the characters up makes the already bare-boned plot even more clunky. It’s the typical attempt to tie the characters together one way or another unnecessarily, jeopardising the result.

Impulsive Divorces: The heart of Love, Again is the struggle of Hyeon-woo and Seon-yeong with their impulsive decision to separate. While their gripes with one another’s bad habits are spot on and relatable for married couples, the exaggeration is a reminder of how a moment of frustration can lead to an argument that gets blown out of proportion… And we often regret the decisions made in the heat of the moment.

Rom-Com Tropes: Love, Again has its moments of rom-com tropes. That said, not all are cringy, and some are pretty well-done. After Seon-yeong started dating Sang-cheol for real, the former and Hyeon-woo undergo their individual journeys of realization about what a good thing they had before the split. Less the third act and selected parts, the tropes are more or less palatable.

Recommended? Yes, if you want your Korean rom-com fix. Love, Again checks the boxes of attractive leads, interesting premise, and not-too-melodramatic. The only pity is that this movie will just be another average title in the long list of rom-coms, wasting the potential to be a piece that’s worth talking about at the pantry or water cooler.