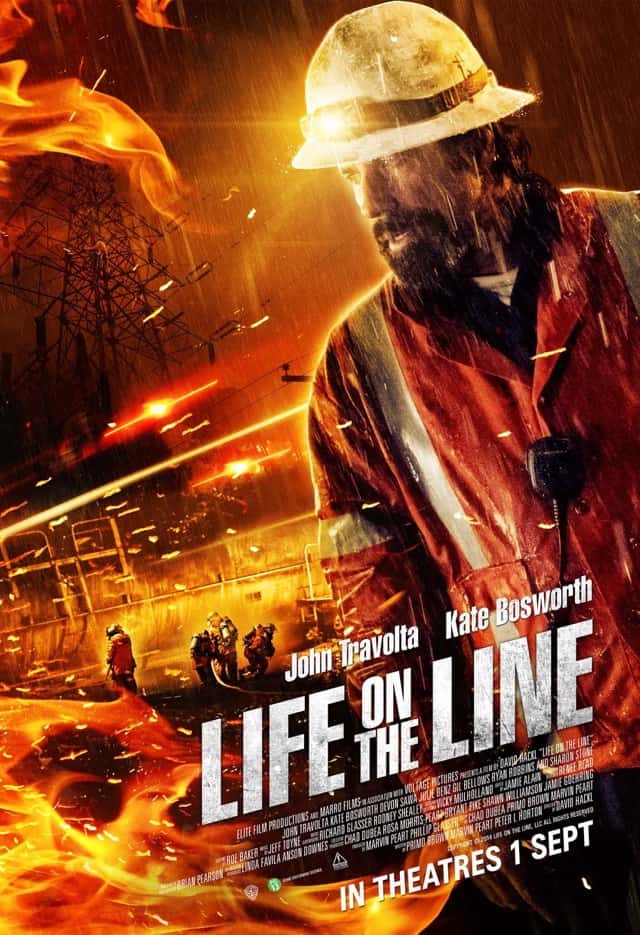 John Travolta has lightning to contend with, and it isn’t of the greased variety. In this thriller, Travolta plays Texas lineman Beau Ginner. Going out on the power lines to perform maintenance is a risky and often under-appreciated job, and Beau knows all too well just how dangerous it is. After his brother dies on the job, Beau cares for his niece Bailey (Bosworth). Bailey is in a rocky on-again, off-again relationship with Duncan (Sawa), a rookie lineman whom Beau disapproves of. Duncan’s mother (Stone) is none too pleased with the idea of her son becoming a lineman, since Duncan’s father was a lineman too and died on the job. Eugene (Robbins) and his wife Carline (Benz) move in across the street from Beau and Bailey. Having returned from Iraq, Post-Traumatic Stress Disorder causes Eugene to behave erratically, potentially putting his fellow linemen in danger. When a deadly storm strikes, Beau and his men have to risk everything to ensure power is restored to the town.

Life on the Line concludes with a title card bringing attention to the Fallen Linemen Foundation. Now, that might seem noble, but the preceding film is chock-full of inaccuracies and does a terrible job of bringing attention to this occupation and highlighting the everyday heroism of linemen. There have been so many ‘men at work’ films about firefighters, so it seems like a no-brainer to apply that template to the profession of power line workers. Instead of being hair-raising and intense, Life on the Line is an utter slog and is excruciating to sit through. The characters aren’t compelling in the slightest, and it’s over 70 minutes into the movie before the storm actually hits. A disproportionate amount of screen-time is dedicated to overwrought and awkwardly acted soap opera conflict. The camaraderie between the linemen and the steely determination with which they go about their work could have been inspirational and heartfelt, but the only feeling this film will elicit is that of boredom.

Travolta is laughably bad in the lead role. We know you’re tired of hearing us harp about his hair in every movie, but it’s impossible to ignore. Early on in the film, he sports a ridiculous ponytail and a beard that’s tied into a ponytail too. There’s also a flashback in which Travolta sports a full biker mane. Thankfully, for the bulk of the film, his hair and beard somewhat approach looking natural. In an early scene in which Beau kisses a young Bailey (Sidney Grigg) on the cheek and forehead, it comes off as distastefully creepy instead of loving and affectionate. There’s no denying that Travolta is generally considered to be a weird guy, and as such it’s impossible to buy him as a blue-collar everyman. He puts on a silly accent and over-acts his way through every scene, delivering a performance that is thoroughly inauthentic.

Duncan is supposed to be something of a bad boy, but former teen heartthrob Sawa is bland rather than roguish. Bosworth is just as unremarkable, her character subjected to a string of hackneyed clichés. As Duncan’s weary, haggard mother, Stone is a world away from the sultry femme fatale she defined herself as in the ’90s. It’s a small part and the character is written in such a way as to be difficult to sympathise with. One can’t help but feel a twinge of sadness watching an actress whose glory days are clearly far behind her. We’re not saying women in film are expected to stay sexy forever, but surely there’s a better way for Stone to keep her career going than hamming it up and yelling a lot in a thankless part.

David Hackl, a production designer who worked on the Saw films and directed Saw V, generates no tension or urgency whatsoever. The framing device in which Duncan relates his experience to a TV interviewer is wholly unnecessary and after all that build up to the big storm, the climactic sequence is markedly underwhelming. Life on the Line could’ve been a noble tribute to under-appreciated linemen, but is instead a misshapen, practically unwatchable mess.