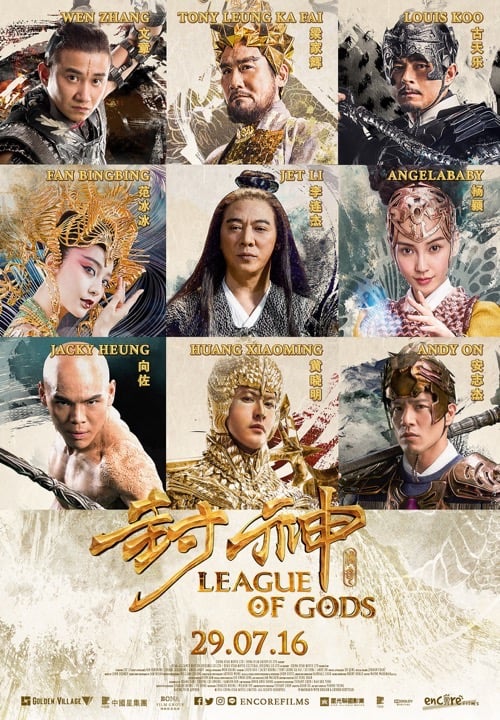 China. Heir to one of the world’s most ancient civilisations and with thousands of years of history to its name. Now reduced to making Western-pandering schlock like League of Gods. It’s a crying shame, especially when one notices the effort and budget that went into producing this CGI fest. With a proper script and more fidelity to Chinese cultural mores, League of Gods could really have been something. As it is, it’s just a steaming, bombastic pile of nothing.

League of Gods is very, very loosely adapted from the 16th century Chinese novel Investiture of the Gods, but most of us will probably recognize the characters and story from either the 2001 TVB drama Gods of Honour, or the 2007 Chinese TV series The Legend and the Hero.

The fatuous King Zhou (played here by Tony Leung Ka-Fai) has brought pain and suffering to the multitudes after falling under the spell of the fox demoness Daji (Fan Bingbing), and it’s now up to a rogue faction led by Jiang Ziya (Jet Li) to save the day and rescue the masses. That, along with the marshalling of Nezha, Yang Jian and Ji Lei (played by Wen Zhang, Huang Xiaoming and Jacky Heung respectively) as Jiang’s champions, is about as close the film gets to its source material. This is actually kind of fortunate, because League of Gods is the sort of adaptation an original wants to pretend it never inspired.

While the original novel and all prior adaptations situate the action in China’s distant past, the events in League of Gods apparently take place in an alternate reality where characters with Chinese names and played by Chinese actors live in cities ripped from Warcraft or Lord of the Rings and fly airships straight out of Star Trek. Remember how critics were up in arms over Feng Xiaogang’s The Banquet, claiming it blatantly pandered to Western audiences? Well, they ain’t seen nothing yet. League of Gods is so full of tropes, plot devices and styles copied wholesale from the Western canon that it becomes a game all in itself just to identify exactly where you’ve seen something before.

At the same time, the film wants to retain folkloric and mythological elements like Nezha’s Fire Wheels and Yang Jian’s Celestial Hound without so much as a piece of introductory dialogue. Cue mass bewilderment. Those familiar with the original story are going to wonder what happened to ancient China, and whole chunks of the plot deriving from Chinese mythology are going to seem superfluous and incomprehensible to those who aren’t. League of Gods tries to make its source material as generic and crowd-pleasing as possible, but ends up distorting itself into a cultural abomination that’s neither here nor there.

This isn’t to say that the film’s not entertaining in a superficial, oh-so-slick sense. There’s plenty of CGI spectacle and technical wizardry to marvel at, and the fight scenes are well-choreographed enough (or at the least the ones with enough choreography to justify the label ‘fight scene’ over ‘pyrotechnic razzle-dazzle’). When every single scene involves a CGI character of some kind or a painstakingly rendered green screen backdrop, however, that curious phenomenon known as special effects fatigue quickly sets in. There is literally nothing else but special effects on display in League of Gods, plot being piecemeal and character development non-existent.

The emphasis on special effects is taken to farcical levels when it turns out the cast members themselves aren’t immune to CGI-fication. Wen Zhang’s Nezha initially debuts as an animated toddler, and is subject to infantile relapses at various points throughout the film. Jet Li gets hit with an anti-ageing curse, which becomes a lame excuse to trot out a digitally rendered version of his younger self.

Even Louis Koo, whose handsome mug the camera usually can’t get enough of, undergoes a twisted metamorphosis into a Doomsday-esque monster in the final act. What this means, of course, is that there isn’t much acting going on at all, so an inspired performance to save League of Gods from mind-numbing banality is totally out of the question. Only Fan Bingbing as the evil concubine Daji manages to rise above CGI-puppet status, but then again, she’s had plenty of practice, having also played the same role in the aforementioned The Legend and the Hero.

To nobody’s surprise, League of Gods will probably end up making a killing at the Chinese box office anyway, thanks to its roster of big names and time-worn premise. A sequel has already been greenlit (the cliffhanger at the film’s conclusion is a dead giveaway), so expect more of the same to blast its way into cineplexes sooner rather than later. The debasement of China’s rich history and culture continues.