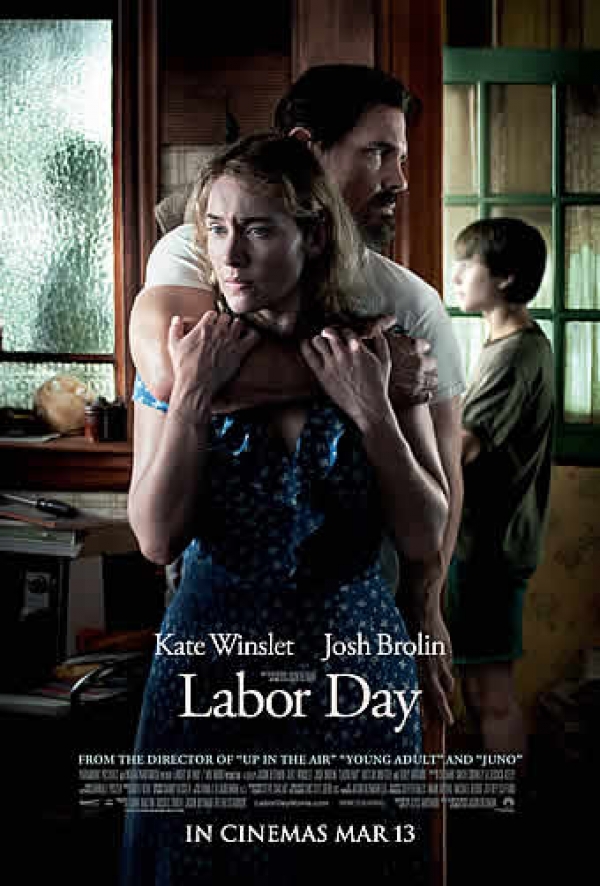 In 2005, Jason Reitman made his directorial debut with the breathlessly acerbic Thank You For Smoking – a dark, funny comedy laced with politics, satire and humanity. He’s since produced several excellent films – Juno, Up In The Air and Young Adult – in the same cheeky, intelligent vein. That’s why Labor Day – adapted by Reitman from Joyce Maynard’s novel – comes as such a surprise. Stripped of his trademark snappy banter and over-the-top characters, the film is Reitman at his quietest and least showy. Unfortunately, it’s also Reitman at his most melodramatic: his excellent cast of actors only just manage to help him drag the film back from the brink of cheesy soap opera.

Adele (Winslet) is a depressed, broken single mother suffering from agoraphobia. Shutting herself up at home with her precocious, dutiful son Henry (Griffith), she ventures out to pick up food and clothes as infrequently as humanly possible. One fateful day, she and Henry encounter Frank (Brolin), an escaped convict, in a department store. Wounded and desperate, Frank finds his way into their car – and, over the course of the Labor Day weekend – into their house and hearts.

The resulting film is a curious blend of hasty romance and psychological drama, twisted around a plot that makes little emotional sense. How could someone as terrified of strangers and new situations as Adele find it within herself to so quickly trust a man she doesn`t know at all – someone who disturbs the sanctity of her home, and threatens, however obliquely, the safety of her son? Sure, Frank is unfailingly kind, considerate and handy around the house, but he`s also a criminal serving time for murder: a crime he doesn`t even really talk about until considerably later in the film. Quite frankly, it`s the kind of rushed, clumsy plotting and character work that you might expect in a soap opera – or, worse, a porn movie.

What makes this ill-advised drama worth watching – despite its many problems – is its cast. Reitman has waxed lyrical about securing Winslet for the title role, and he`s absolutely right to have been so overjoyed. She delivers a beautifully sensitive performance as Adele, making you want to believe that her character is a hopeless, wounded romantic rather than an unhinged, over-trusting madwoman. Brolin, too, lends Frank a soul and heart that the script occasionally denies him, while Griffith is wonderfully natural as a boy who begins to worry what it means when his mother finds happiness that`s seemingly independent of his efforts and existence.

Of course, there`s another reason to watch Labor Day: the infamous scene in which Frank takes a bucket of peaches and teaches his hosts/hostages to make the perfect peach pie. The moment he guides Adele`s hands into the pie batter is a moment that will either convince you that these two lonely hearts belong together, or that something has gone quite oddly wrong with the entire film. It`s a dilemma that presents itself at many points during Labor Day, and one that rarely resolves itself in the way that Reitman clearly wants it to.

SUMMARY: A peach of a cast, but the plot is the pits.