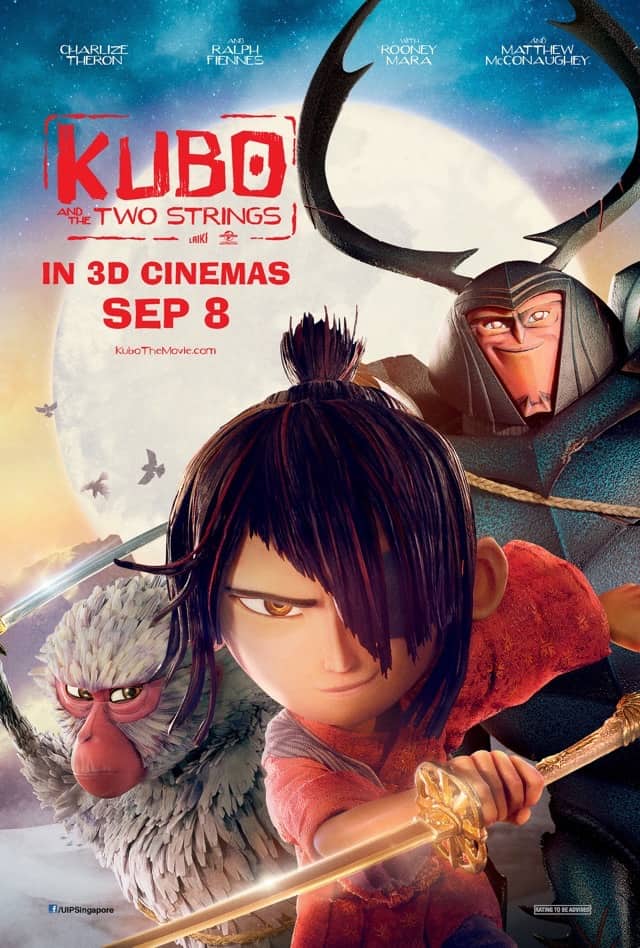 After taking us to the spooky Other World in Coraline, the Massachusetts town of Blithe Hollow in ParaNorman and the Victorian hilltop municipality of Cheesebridge in The Boxtrolls, Laika transports audiences to ancient Japan in this fantasy adventure. Kubo (Parkinson) is a young boy who is a gifted raconteur, and who delights the villagers with origami figures that become animated when he plays the shamisen, a traditional stringed instrument. Kubo’s sickly mother Sariatu is near-death, and Kubo learns of his higher calling. When he is threatened by his mother’s Sisters (Mara), Kubo sets out in search of the mythical armour of Hanzo, his long-lost warrior father. Hanzo is guided by the protective, no-nonsense Monkey (Theron), a wooden monkey charm transformed into an actual monkey by his mother’s magic. Along the way, Beetle (McConaughey), an apprentice of Hanzo who was cursed to take the form of a humanoid insect, joins Kubo and Monkey. Together, they embark on an odyssey to defeat Raiden (Fiennes) the Moon King, Kubo’s grandfather, who has vowed vengeance on Sariatu after her betrayal.

Kubo and the Two Strings is a folk tale come to vivid life, an imaginative original narrative woven together from familiar mythical elements. At its core, the film is a straight-forward MacGuffin quest, but its message about the intrinsic power of stories and how invaluable storytelling is to preservation of any culture means that it’s more than the sum of its parts. Laika’s CEO Travis Knight directs from a screenplay by Marc Haimes and Chris Butler, with Shannon Tindle and Haimes receiving a ‘story by’ credit. When Hollywood draws upon Eastern culture, there’s always the danger that something will be lost in translation, with many tin-eared east-meets-west mashup movies as evidence. Kubo and the Two Strings is infused with Miyazaki-esque grace and sensitivity, earnest yet far from staid.

Stop-motion animation is as painstaking an art form as they come, and Laika is one of the few bastions of this dying art. The technical advancements championed by Laika, including the use of 3-D printed components in their puppets and the integration of computer-generated effects, set their work apart visually from the typical modern animated film. The tactility in the costumes and sets and the staggering range of nuanced emotions that the puppets are capable of conveying is testament to the dedication of Laika’s artists and technicians. Standing at 4.8 m tall, the skeleton demon is the single largest stop-motion puppet ever constructed. All the tireless toiling from Knight, lead animator Malcolm Lamont and the Laika team pays off wondrously.

Kubo and the Two Strings has expectedly drawn some flak for casting white actors in voice roles in a movie set in ancient Japan. Knight has defended this by saying that the “considerations you have casting a live-action film are different than the considerations you have casting an animated film,” citing “the ability of an actor to capture the emotion with their voice” as the prevailing criterion in casting. Of course, actors like Theron and McConaughey have marquee name value as well, and the Japanese townsfolk are voiced by Japanese actors like George Takei, Cary Hiroyuki-Tagawa and Minae Noji. In any case, it is a step in the right direction that stories with basis in varied cultures are being told with this much care and artistry. Sure, we would like to hear Asian actors in the lead roles in a film like Kubo, but perhaps chiding Laika for this misses the forest for the trees in the ongoing conversation on diversity and representation in Hollywood.

After Isaac Hempstead Wright’s turn as Eggs in The Boxtrolls, this is the second Laika film in which the protagonist is voiced by a Stark kid. Instead of Bran, it’s Rickon. Kubo is very much your standard issue chosen one, but unlike the typical adventure hero, it’s his artistic abilities rather than skill in combat that are highlighted. While there’s a degree of sorrow and uncertainty that follows Kubo around, there’s also wonderment and the capacity for creativity. The scenes in which Kubo grumbles about his guardian’s unyielding strictness do make him relatable even as he plunges into a fantastical milieu.

Theron’s Monkey has much in common with Angelina Jolie’s Tigress in the Kung Fu Panda films: they’re both adept warriors who take themselves seriously and do not suffer fools, but have a soft side if you can find your way to it. The withering deadpan with which Theron intones lines like “you’re an embarrassment” ideally captures the personality of the character.

The dim-witted but sincere Beetle is reminiscent of the superhero pastiche the Tick generally functions as comic relief. The jokes provided by Beetle often veer too close to the standard type of humour seen in mainstream animated films, and as such can sometimes be incongruent with the general style and tone of Kubo. McConaughey is enjoyably affable in the part and audibly puts in effort in tamping down his signature drawl. While there does turn out to be more to Beetle than meets the eye, his characterisation as a typical animated movie ‘funny sidekick’ is a mite disappointing.

Fiennes’ Moon King doesn’t quite have enough screen time to be established as a threat, with most of the menace courtesy of the creepy levitating Sisters. Even with not especially compelling villains, the quest is still absorbing thanks to the interaction between Kubo, Monkey and Beetle and the assorted predicaments they find themselves in. A film in which music plays such a crucial part in the plot has got to have a strong soundtrack, and Dario Marianelli’s score is lush and evocative. Regina Spektor’s cover of George Harrison’s While My Guitar Gently Weeps is transcendent and wont to give listeners the tingles. Don’t worry if you’re confused by the title, it will make sense as the plot progresses – and stick around past the main-on-end titles for the customary peek behind the curtain.

Summary: Sumptuous mixed-media animation make it impossible to look away from Kubo and the Two Strings, a captivating ode to the power and vitalness of storytelling.