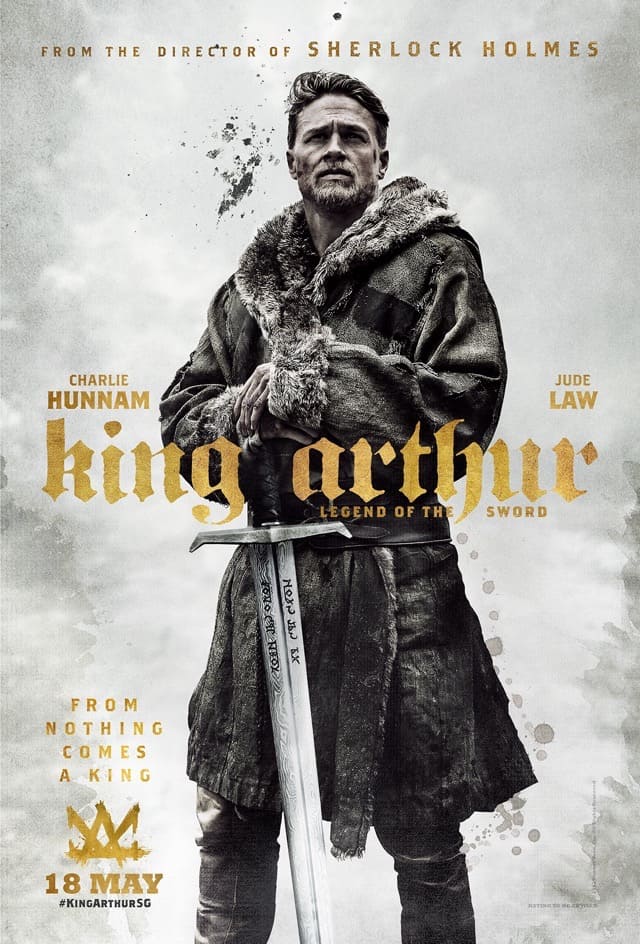 Mythical monarch King Arthur rears his head in not one, but two big-budget summer movies this year. Before Transformers: The Last Knight, we get this origin story. Orphan Arthur (Hunnam) has led a hardscrabble existence on the cobblestone streets of Londinium, unaware of his royal heritage. Arthur’s father, King Uther Pendragon (Bana), was deposed by Uther’s brother Vortigern (Law), who has become a power-mad sorcerer. Only Uther or his direct progeny can pull the sword Excalibur from the stone. When Arthur accomplishes this feat, he becomes the target of Vortigern’s fury. Arthur is assisted in his quest to defeat Vortigern by his friend Wetstick (Kingsley Ben-Adir), Uther’s loyal advisor Sir Bedivere (Hounsou), skilled archer Goosefat Bill (Gillen) and a mysterious woman who wields control over animals through magic, known only as the Mage (Bergès-Frisbey). Arthur must achieve mastery of Excalibur, as he and his allies fight to reclaim the throne that is rightfully his.

King Arthur: Legend of the Sword is the first in a planned series of six films. Legend of the Sword morphed continuously throughout its development: David Dobkin was originally set to direct a King Arthur film starring Kit Harington in the title role and Joel Kinnaman as Lancelot. Then, Colin Farrell was attached to the Arthur part, with Gary Oldman cast as Merlin. Under Guy Ritchie, it’s become Snatch meets Lord of the Rings. There have been countless big screen permutations of the Arthur legend, and this version smacks of a desperation to put a new spin – any new spin – on a public domain tale with name recognition. Legend of the Sword wants to be a superhero movie, a street level crime film, and a Game of Thrones-style epic of palace intrigue and high fantasy. Alas, it ends up being all those things and none at the same time; Ritchie struggling but failing to meld these disparate elements into a cohesive whole.

As with any legend so old and so widespread, there is no one true version of the King Arthur story. As evidenced by the floating fireballs and myriad outsized CGI animals, this isn’t intended to be “historical” in any sense. The screenplay by Ritchie and Lionel Wigram, rewritten from a draft by Joby Harold, attempts to distil several elements from various versions of the myth, but they wind up convoluting things in the process. Narrative gymnastics make the Sword in the Stone the same sword as Excalibur, when in earlier tellings, they were separate swords. As expected from Ritchie, there is a combination of flash and grit. James Herbert’s editing often makes this difficult to follow. Not only is it jittery and arrhythmic, but there are multiple sequences that cut between Arthur and co. discussing a plan, then enacting said plan – or maybe it’s a hypothetical scenario of how the plan will unfold. It’s supposed to make things interesting, but renders them confusing instead.

Hunnam is a fine leading man, and got into spectacular shape for the film, packing on the muscle. Hunnam wanted the role so much that he declared to Ritchie that he would physically fight Henry Cavill and Jai Courtney, who were also being considered, for the part. For all Hunnam’s effort, Arthur is borderline boring. It’s a standard hero’s journey, rejecting the quest, accepting the quest story. He’s Oliver Twist 13-14 centuries early (there’s a pickpocketing montage) who grows up to shoulder the burden of destiny. Despite Ritchie’s stylistic trappings, Arthur emerges as a standard, serviceable hero – nothing more than that.

Before Law dons Dumbledore’s robes, he plays a far less benevolent wizard. Vortigern is characterised as a mafioso, usurping power and stabbing those close to him in the back – often literally. He slouches in his throne, disrespectful of the seat of power. There’s little nuance to the part, and while Vortigern is appropriately treacherous, he’s never truly scary.

Arthur’s associates in this film are proto-Knights of the Roundtable – Bedivere served King Uther, while Wetstick grew up on the streets of Londinium alongside Arthur. There’s an attempt to make this an eclectic bunch – we don’t know of another Arthurian movie featuring a Chinese martial artist named George (Tom Wu), who trains young Arthur in combat. While there’s the veneer of personality, the supporting characters are insufficiently defined. Gillen is fun to watch, owing more to his own flair as a performer than to the writing.

Bergès-Frisbey’s character is apparently Guinevere, though she’s only called ‘the Mage’ in the film. As the female lead, one would expect Bergès-Frisbey to get more to do, beyond issuing ominous warnings and standing offscreen as digital critters do her bidding. Speaking of the digital critters, the menagerie of elephants, snakes, eagles, wolves, bats and other beasts aren’t nearly as awesome (or as believable) as the Rabbit of Caerbannog from a certain other Arthurian movie.

Bana is in precious little of the film, and his appearance made us wonder what a King Arthur movie starring him would be like (probably better). Thankfully, the David Beckham cameo isn’t nearly as goofy as we feared.

While the Welsh and Scottish shooting locations are breath-taking, Legend of the Sword feels like a spectacle movie that is markedly unspectacular. For better and worse, but mostly worse, it is unmistakably a Guy Ritchie film. Ritchie’s sensibilities fail to coalesce with the mystique and grandeur he wants this film to possess. Perhaps with the origin story out of the way, the sequel will be more entertaining – but hoping for six of these is just giddy optimism.

Summary: Legend of the Sword is a flashy but somewhat incoherent remix of Arthurian myth that is caught in limbo between street-level grit and full-on fantasy.