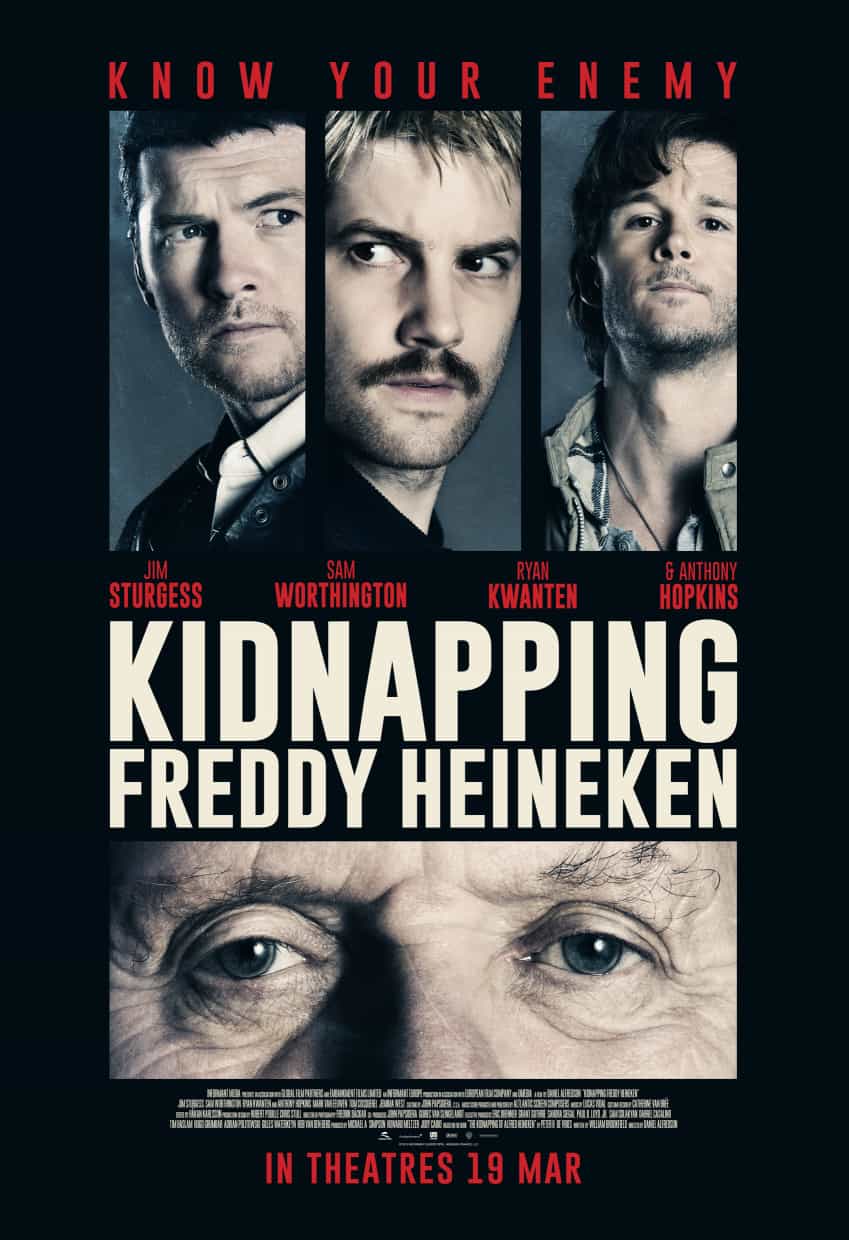 It’s human nature to be drawn to the glittery promise of get-rich-quick schemes. Even though we know deep down that all those sidebar ads on any given website have nary a grain of truth to them, we can’t help but entertain the thought that it just might be possible to make all that money so easily. In the ’80s, those ads on the internet didn’t exist yet, so a group of Dutch friends, having fallen on hard times, devise a novel way to make a quick buck – kidnapping. Their target is none other than Freddy Heineken (Hopkins), chairman and CEO of Heineken International Breweries. Willem Holleeder (Worthington), Cor van Hout (Sturgess), Jan Boellard (Kwanten), Frans Meijer (Mark van Eeuwen) and Martin Erkamps (Thomas Cocquerel) demand a staggering ransom of 35 million Dutch guilders for the safe return of Heineken. The case captures Europe’s attention, the public at large unaware that these “master criminals” are really just a few regular guys.

Kidnapping Freddy Heineken is based on investigative journalist Peter R. de Vries’ account of true events. There was a 2011 Dutch film called De Heineken Ontvoering, but it was made without de Vries’ involvement and is considered to be a largely fictionalised version of the incident. With its closely-knit band of friends pulling off an ambitious caper, the theme of “honour among thieves” and an old-school filmmaking approach behind it all, Kidnapping Freddy Heineken reminded this reviewer of Ben Affleck’s crime drama The Town. Just as it was in that film, our gang of protagonists needs to hit that sweet spot of being “just likeable enough”, such that we can root for them even as they engage in morally reprehensible activities, having understood their motivation. Director Daniel Alfredson only partially achieves that here. While there are several moments of nail-biting intensity, the film never really takes hold. What should be a fast-paced caper instead feels plodding and by-the-numbers, the film coming off as much longer than it actually is.

Worthington, Sturgess, Kwanten, van Eeuwen and Cocquerel all project a degree of working-class appeal, crucial to making the audience shout, “Down with the rich dudes, power to the plucky little guys!”. However, they never seem like a cohesive team, and this is due in no small part to the fact that their accents are all over the place. They’re playing real people – real Dutch people. Worthington, Kwanten and Cocquerel are Australian, Sturgess is English and only van Eeuwen is actually Dutch. It really pulls one out of it, especially since it’s clear that Alfredson is striving for a believable street-level grittiness. There’s also the old plot device of the pregnant wife back home, played by Jemima West, worrying about what her husband is up to. Even if this did really happen, the film’s treatment of it is a mostly unsuccessful attempt at generating pathos. 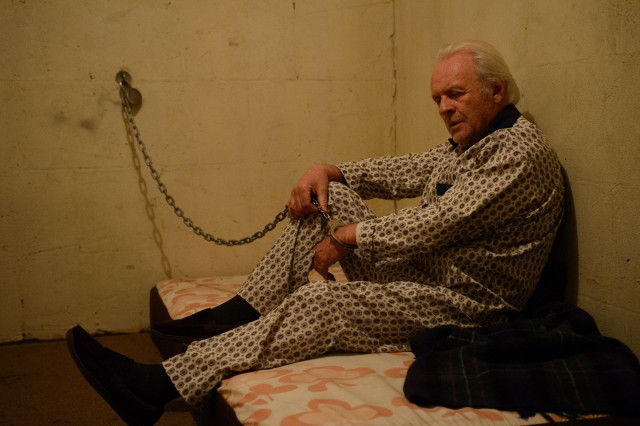 The ace up Kidnapping Freddy Heineken’s sleeve is Sir Anthony Hopkins, who remains as towering a presence as ever and completely commands the screen whenever he’s on it. Throughout his ordeal, Hopkins’ take on the beer baron seems more amused than anything else, displaying an unfazed façade to his kidnappers and refusing to be intimidated by them. The scene in which he calmly requests a bathrobe, slippers, a shaving kit and even a change in the music being played is Hopkins at his coolest. This is by no means a big movie and Hopkins could’ve easily phoned it in, but he relishes the chance to play the wily Heineken, toying with his captors instead of cowering in fear of them.

As a lo-fi true crime thriller, Kidnapping Freddy Heineken is halfway decent, but it suffers from a flagging pace and a crucial lack of urgency as well as the feeling that many of its actors are somewhat miscast. One thing the film definitely gets right is Anthony Hopkins, and it is he who keeps the film watchable.

Summary: Swap out your “nice Chianti” for a bottle of Heineken – Anthony Hopkins enlivens this mostly sturdy but dull true-crime thriller.