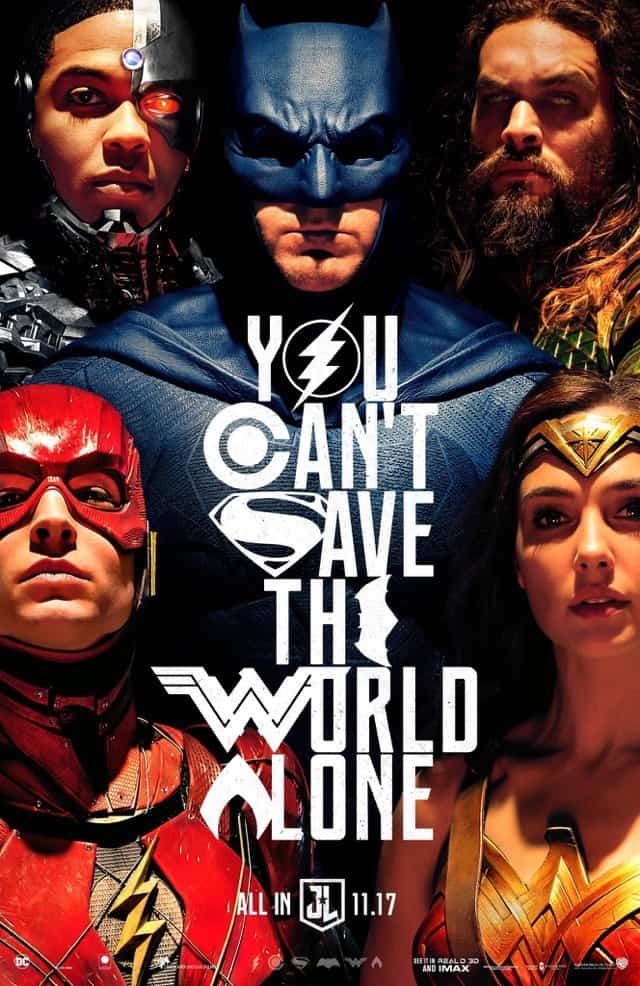 What would you do if three out of four films in your blockbuster superhero franchise aren’t particularly good? When going forward with the fifth film (the all-important one that ties everything together and launches it into the stratosphere), do you stick with what you know? Or do you try to learn from the outpouring of love and acclaim that greeted Wonder Woman, the outlying fourth film? Do you add more humour and a dash of fun to the generally dark, dour proceedings? Do you refine your script to focus a little more on character and less on bombastic spectacle? In the case of Justice League, the answers – and corresponding results – are mixed. (Kinda, kinda, yes, kinda, by the way.)

Justice League opens in the wake of Superman’s (Cavill) death. The world – and his erstwhile frenemy Bruce Wayne/Batman (Affleck) – are in a dark depression. But cataclysmic sieges on a planetary scale wait for no man (or woman). Steppenwolf (played by Hinds via motion-capture), an ancient, alien evil that once tried to claim Earth as his own, has returned with an army of fear-fuelled parademons. Bruce realises that, without Superman as the first and best line of defense, he needs to assemble a team (a ‘justice league’, as it were) to save the world.

Consequently, the first half of the film is rather exposition-heavy, as it busily sets up its characters, relationships and stakes. Bruce reunites with Diana Prince/Wonder Woman (Gadot), just as she’s begun to step out from beneath the shadow of grief. We also get to know the other potential League members that we’ve only glimpsed in passing – snarky speedster Barry Allen/Flash (Miller); sassy fish-whisperer Arthur Curry/Aquaman (Momoa); and surly human machine Victor Stone/Cyborg (Fisher).

Thankfully, Justice League isn’t as relentlessly dark and joy-free as director Zack Snyder’s previous entries in the DCEU. While there’s nothing wrong with going full grim when putting superheroes on screen (Christopher Nolan’s Dark Knight trilogy proved that you could do so with depth, flair and intelligence to burn), Snyder’s Man Of Steel and Batman Vs. Superman were curiously bleak pictures. Stuffed with bombastic spectacle and testosterone-charged face-offs, both films were more or less dreadful, displaying a fundamental misunderstanding of their main characters. (Cavill’s broody Superman, in particular, is a painfully misguided interpretation of DC Comics’ most iconic superhero, a literal and figurative beacon of light.)

In contrast, there’s a brighter vein of hope and humour threaded throughout Justice League, though it’s unclear just how much of that can be credited directly to Snyder. The main reason for that is the involvement of Joss Whedon, who wrote and directed Marvel’s two enormously successful and largely acclaimed Avengers films. Initially brought on to doctor the script, Whedon wound up overseeing post-production on the film (including significant reshoots), after Snyder chose to take some time off for very sad personal reasons.

Without question, the final film benefits from the injection of Whedon’s signature banter and his ability to effectively juggle multiple character narratives. Whether it’s Barry and Victor bonding in a graveyard or Arthur’s big speech before the final battle, Whedon contributes some of the most purely fun – and funny – moments in the DCEU to date.

Characters and relationships, though more sketched than fleshed out, work well enough. As the film progresses, each member of the fledgling League works out who they want to be, as people and as the earth’s self-appointed defenders. The newcomers are all decent, though not quite the breakout successes the studio is no doubt hoping for. Miller’s Flash starts out adorable but ends up annoying. Momoa is underserved by the script, but nails the swagger. With just half his face to work with, Fisher amps up the angst while buried beneath some oddly ugly character design.

As for DC’s Big Three, it can be tough to buy into Diana’s decades-long descent into grief following the character-defining climax of Wonder Woman. But, given that her arc is necessarily dictated by earlier narrative decisions, Gadot finds some lovely emotional beats to play as Diana chooses to lead and share her light with the world. The film also nudges the hitherto badly-botched relationship between the late Superman and Lois Lane (Amy Adams, still criminally underused) in a better direction.

The biggest surprise of Justice League is how Affleck’s Batman – almost rabidly xenophobic in Batman Vs. Superman – grounds both the film and the team. There’s something hauntingly poetic about watching this taciturn loner, who could so easily hide himself away in a fortress of wealth and power, trying to atone for the world’s loss of Superman. Embracing the fact that he’s by far the most mortal member of the League, the film finds the heroism in Batman’s humanity.

For all that it gets right, though, Justice League suffers for being what it largely still is: a Snyder blockbuster. He tends to favour overblown spectacle and one-dimensional villains, both of which culminate in the peculiarly unmenacing Steppenwolf – a CGI-drenched creation that manages to be hammy and fake all at once. The plot is, somehow, stupidly convoluted and insultingly simple at the same time. (‘Mother Boxes’ must be another way of spelling ‘MacGuffin’.) And, while absolutely everything about this film is better than what Snyder has produced before, it still never quite grabs the heart.

Nonetheless, Justice League is a step in the right direction. It doesn’t reach the glorious heights of Wonder Woman, but it doesn’t regress to the murky depths of Batman Vs. Superman either. With its story and characters turned firmly towards the light, there might be hope for this franchise yet.

Summary: It’s far from great, and not always very good, but at least it steers clear of awful.