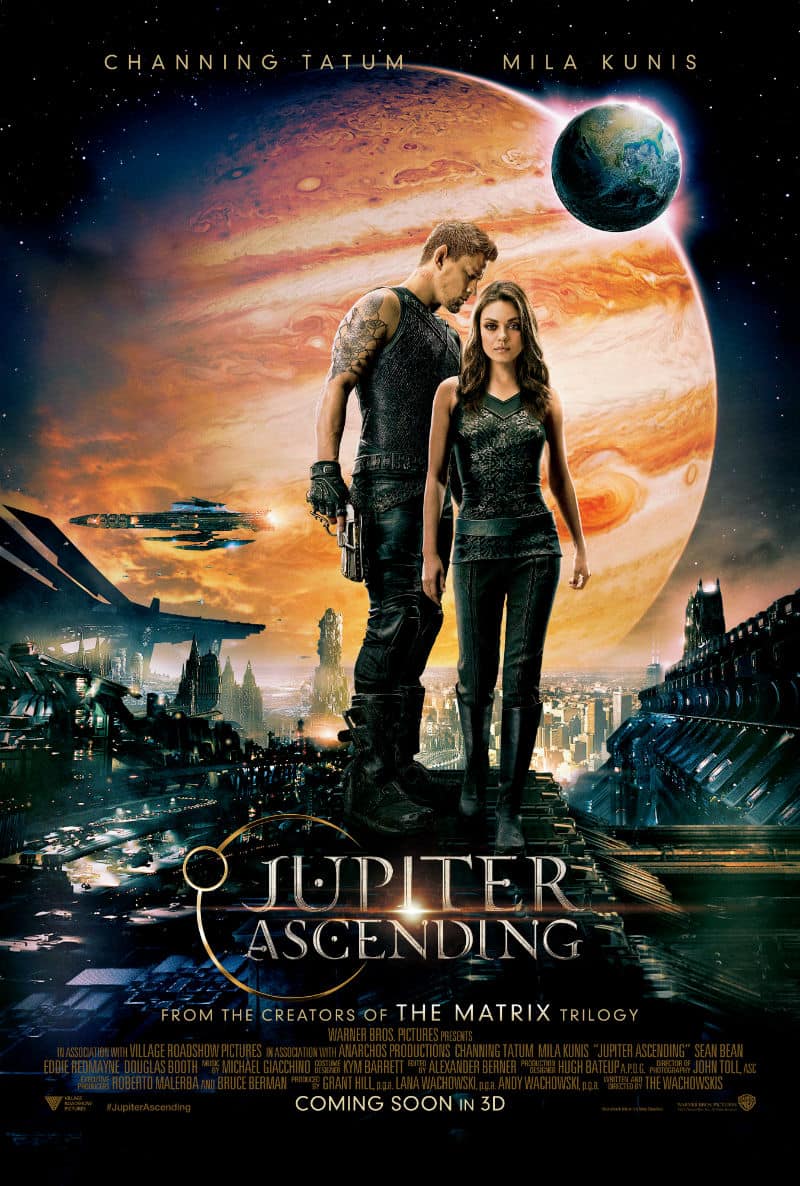 It seems that The Wachowskis enjoyed working on the futuristic “An Orison of Sonmi~451” section of Cloud Atlas, because with Jupiter Ascending, Lana and Andy go full-on sci-fi space opera. The title refers not only to the planet but also to the character Jupiter Jones (Kunis). The daughter of an astronomer and a Russian immigrant, Jones lives with her mother’s extended family and works as a maid, scrubbing toilets for rich families. Interplanetary warrior Caine Wise (Tatum) arrives on earth to guide and protect Jupiter, who is in reality the reincarnation of the queen of the universe. The queen’s three children, Balem (Redmayne), Titus (Booth) and Kalique (Middleton) Abrasax, are vying for inheritance of the planet earth, Jupiter’s emergence throwing a spanner in the works. Breaking free of her mundane existence, Jupiter comes face to face with her larger-than-life future among the stars. 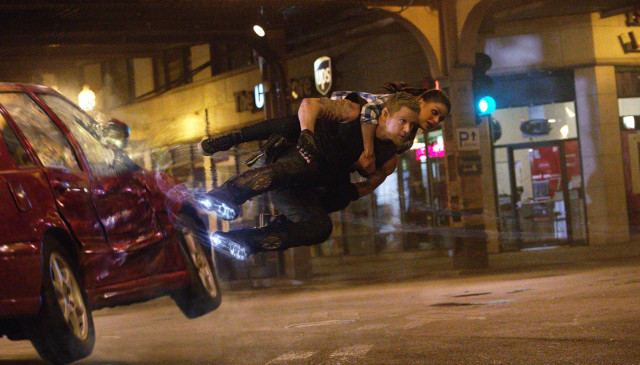 A friend of this reviewer remarked that she thought Jupiter Ascending was an adaptation of a young adult novel, and it’s not hard to see why. The Wachowskis follow the “chosen girl” template to the letter, with the Mary Sue trope of an ordinary girl who discovers her extraordinary destiny in full effect. The foremost example of the space opera subgenre in film is the Star Wars saga – unfortunately, Jupiter Ascending has more in common with the prequel trilogy than the original three films. The Star Wars prequels were preoccupied with political nitty-gritties that didn’t exactly make for very thrilling storytelling. There, it was trade negotiations, here, it’s a dynasty-run corporation. A good portion of this film is Mila Kunis about to sign contracts. With the three siblings jostling for control of an intergalactic corporate empire, this is Dallas in outer space. 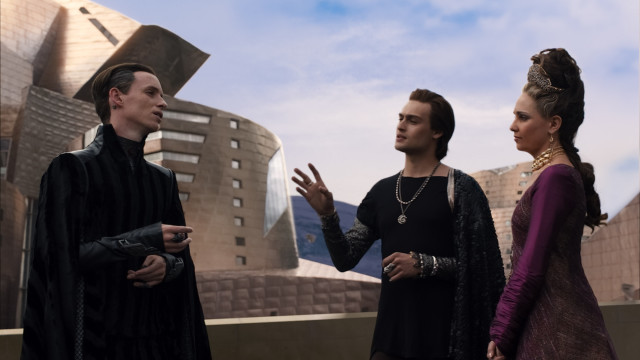 While the story isn’t the greatest, the milieu in which it takes place is quite impressive. This is a visual feast and everywhere one looks in Jupiter Ascending, care and effort is evident. From the production design by Hugh Bateup to the costume design by Kym Barrett to the visual effects work supervised by Dan Glass, this does not feel like hastily slapped-together sci-fi schlock. Sure, the visual ideas may not be earth-shatteringly unique, but this is the kind of film in which every little prop feels like a work of art. When there are low budget productions out there painting NERF guns black and hoping the audience doesn’t notice, that is worth something. A scene in which Caine swoops between skyscrapers on anti-gravity boots makes far better use of the Chicago skyline as an action sequence environment than the Transformers movies ever did. One of the locales is a city inside the storm of the planet Jupiter’s red spot. There is the feeling that there is a rich mythology and the potential for an engrossing universe somewhere waiting to be built upon that this particular story doesn’t tap into. 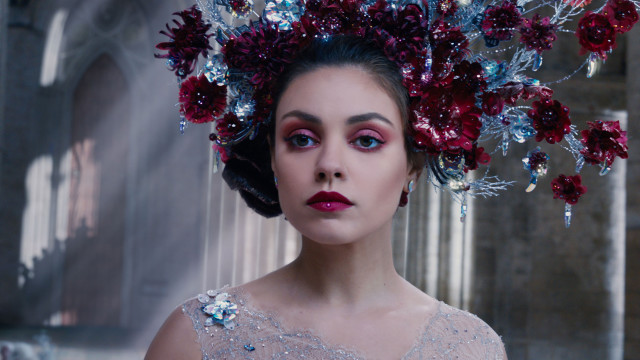 There is an effort made to have Jupiter Jones be at least a little more than the tabula rasa protagonists of her type often are – Mila Kunis is sufficiently charming in the role and finds the right balance for the character such that she doesn’t come off as wholly annoying. We also get to see her relatives, their squabbles juxtaposed against the grand intergalactic family dispute. Points there, seeing as it would be easier to go the “conveniently an orphan” route. That said, it is still difficult to buy Jupiter as little more than a plot device. 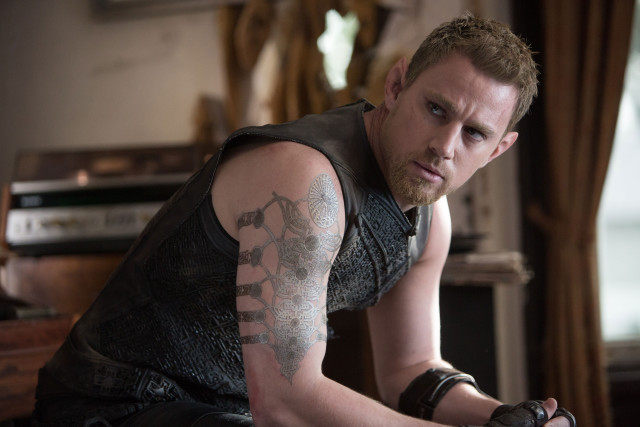 Caine is also very much a stock character – stoic, tough, not necessarily a romantic guy. We stand by the opinion that Channing Tatum’s true calling is comedy and he’s not the greatest at the straight-up man of action thing, but he does give it a good attempt here. He does look slightly goofy playing a space warrior spliced with wolf DNA and, naturally, he goes shirtless for a portion of the film. Going off Eddie Redmayne’s performance here alone, it’s hard to believe that he is an Oscar nominee. As the supercilious aristocratic villain, Redmayne opts for a hoarse, mumbling line delivery and his outbursts aren’t as hammily entertaining as this reviewer was hoping for. Douglas Booth’s Titus is preening and vain; these just aren’t very original interpretations for characters of this type. Sean Bean is as reliable as he usually is, but as “the mentor”, it’s another stock character without many dimensions to him. 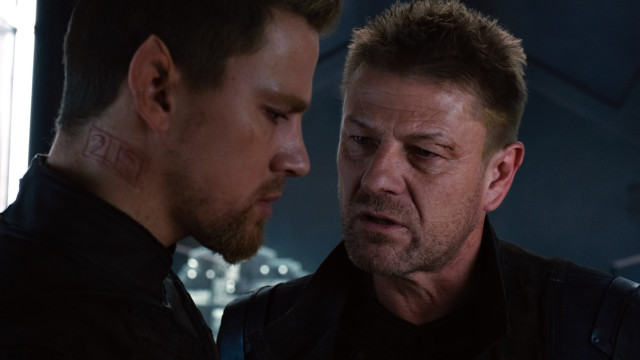 When Jupiter Ascending was pushed back from its summer 2014 release date, speculation was rife that it was because of a certain Marvel space opera flick that posed heavy competition and there and then, many made up their minds that the film would be a train-wreck. While there are potentially laughable elements, Jupiter Ascending is middle of the road rather than outright terrible and it is very competently made. The abundance of visual splendour does make up somewhat for the “been there done that”-ness of the plot.