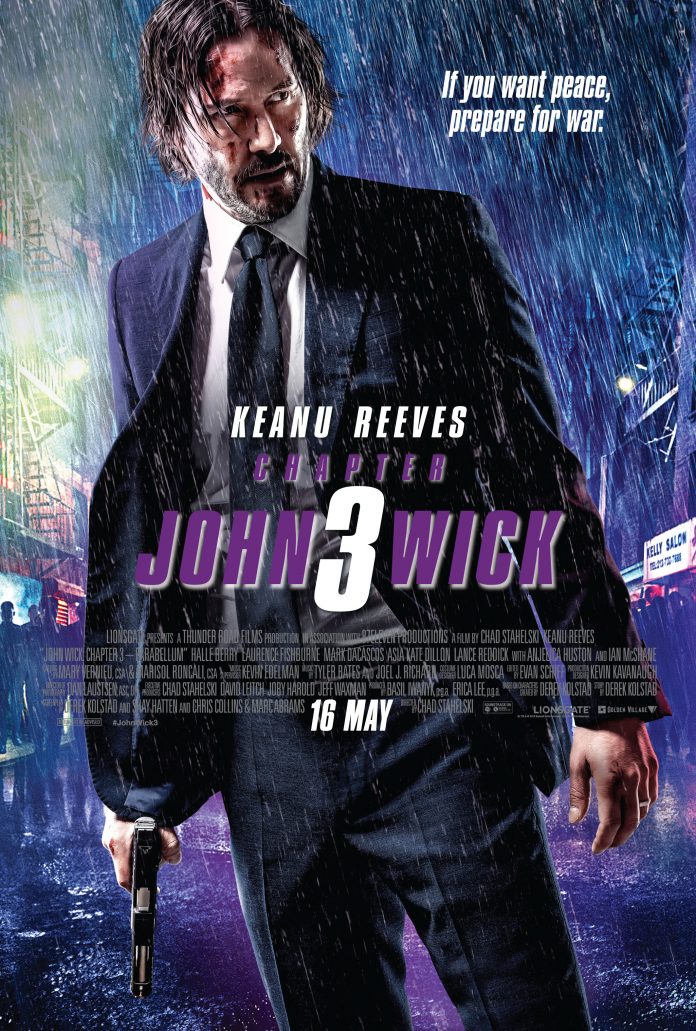 The Low-Down: The third and supposed final instalment in the John Wick trilogy starring old and new cast returns with stuntman-turned-director Chad Stahelski (Keanu Reeves’s Neo stunt duo in The Matrix). A good three quarters of Parabellum is just John racking up the body count the way John Wick is famous for. Melee Judo combat, shooting numerous adversaries in the head, slashing of throats, and several other impromptu execution styles. It’s a lot of fun packed in here — action and comedy-wise, so get ready for a ride.

The Story: Picked up moments after the prequel where John killed a fellow assassin in the Continental Hotel — the safe haven where it’s against the rules for anyone to kill anyone on the grounds — the titular hitman hurries to gather more weapons before the $14m bounty on his head takes effect. John fights off assassin after assassin, with daggers, old-school firearms, katanas, and even a library book and… horses. He uses all his gold coins for desperate favours from old buddies in an attempt to escape from practically the entire assassin community. The rest of the movie is John trying to find the head of the High Table and negotiate a redemption agreement, racking up more bodies than Parabellum’s predecessors.

The Good: Stahelski and crew know exactly the reason John Wick as a property is such a hit — fans just want to see the demigod-hitman perform his signature balletic judo moves and shooting people in the head. And we’re given a deeper look into his roots in the second act. John as a character is consistently written and you can truly feel that it’s the same assassin that started his killing spree a few weeks ago in the movie’s timeline. That’s exactly what makes John’s motivations and actions predictable yet satisfying to follow. New additions such as Halle Berry’s blood-marked partner Sofia, Mark Dacascos’s sushi chef assassin Zero and Asia Kate Dillon’s over-the-top yet contained Adjudicator make the most of their limited screen time to present solid, whole characters that spice things up.

The Not-So-Good: Fans who love the emotional moments and lore of the John Wick universe might find Parabellum a bit lacking on that front. Also, because most of the runtime is action-packed, certain parts feel a rip-off of modern RPGs. Melee combat and gun shootouts can be dull after extended and seemingly repeated moves at times too. These are not dealbreakers by any means but might be a minus for diehard fans.

Knock-Out Sequences: Every fight scene is a treat but the final showdown where John uses “guns, lots of guns” — his response when Winston (Ian McShane) asks John what he needs to face off the High Table’s finest combatants — alongside Winston’s trusted aide, Charon (Lance Reddick), is by far the most flashy and intense. Another notable sequence is where John and Sofia (Berry) face off a horde of Morrocans with the help of the latter’s bulletproof-armored canine duo.

Watch Out For: The first 15 minutes where John and the bounty hunters after him pull off some of the most impressive drawn-out fighting scenes in a long time. Watch Reeves and an amazingly talented stunt crew perform top-notch choreography mixed with some straight-faced comedic moments.

Recommended? Absolutely. Parabellum is a critical success to which every action flick (and trilogy) strives but usually fail. Aside from some slight misses in terms of narrative direction, the action, dry humour, choreography, and technical execution are all on point. Parabellum will be the movie action fans rave about and deservedly so.