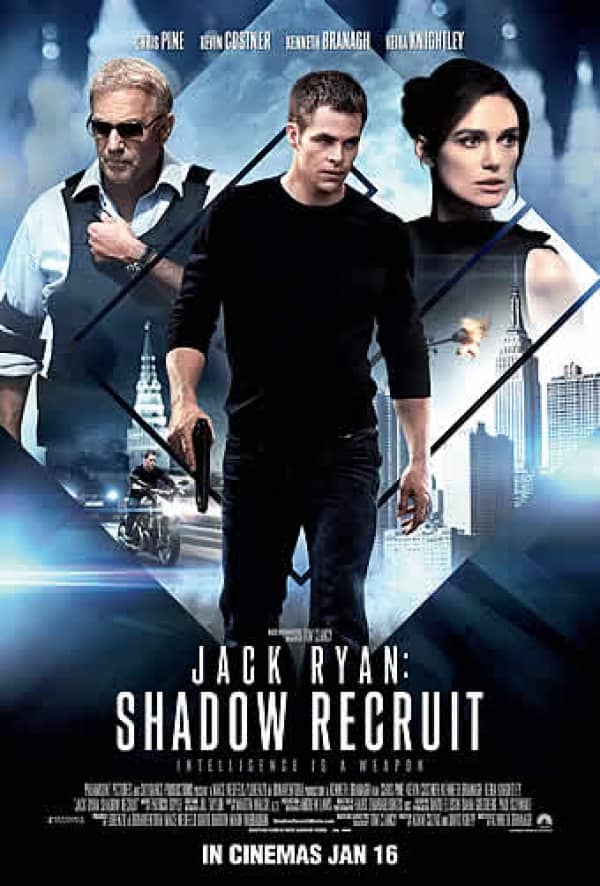 Jack Ryan is a junior financial intelligence analyst with the CIA, working undercover in a bank on Wall Street. Ryan was recruited by and answers to Naval Commander William Harper (Costner), and Ryan’s first mission in the field takes him to Moscow. Russian magnate Viktor Cherevin (Branagh) is masterminding a plot to collapse the US dollar and crash the global economy with a terrorist strike on Wall Street. Things get a little complicated when Ryan’s fiancée Cathy (Knightley) arrives in Moscow to spend the weekend with him.

Jack Ryan: Shadow Recruit is best described as conventional, but not to a fault. Anyone who’s seen a handful of action thrillers will recognise all the elements at play and granted, it’s hard to come up with something terribly fresh in this genre. The shootouts, the fisticuffs, the car chases, it’s all here. And yet, the film is several steps above feeling like it’s just going through the motions, and while “financial terrorism” doesn’t sound quite as exciting as “global thermonuclear war”, there are still some thrills to be had.

One of the main reactions when the trailer for this film was released was that Jack Ryan had been turned into a run-of-the-mill espionage action hero, more Robert Ludlum than Tom Clancy. And yes, while there are moments in the film that seem straight out of the gritty, shaky-cam-infused Bourne/Daniel Craig Bond playbook (that fight in the hotel bathroom in particular), Jack Ryan is still an analyst, still a PhD-holder and still does smart-people stuff. The film also sticks surprisingly closely to Ryan’s background in the books: he’s a Second Lieutenant in the U.S. Marine Corps whose military career is cut short by a helicopter accident in the line of duty, and he goes on to join the CIA and take a position in a Wall Street bank.

Branagh isn’t the first name that comes to mind when one thinks of directors who’d make action thrillers but, aided by veteran second-unit director and stunt coordinator Vic Armstrong, Branagh does well here. The film’s opening quickly and efficiently establishes all the back-story on the Jack Ryan character we need to know and there’s a briskness and energy to the proceedings. The whole thing is a fairly straightforward affair but, in this age of overly-convoluted blockbusters, perhaps a coherent, semi-plausible spy thriller isn’t such a bad thing.

Pine is as charismatic and watchable as he usually is, giving us a hero who’s still learning the ropes and isn’t fully sure of himself just yet. He doesn’t quite make the role his own, but perhaps he will with time, and he is more interesting in the part than Affleck was in The Sum of All Fears (though Ford probably still is the best Jack Ryan so far). Costner makes a good authority figure, seasoned and watchful, protective over Ryan but never mollycoddling the recruit. Knightley struggles a little with an American accent and yes, the part is pretty much “the girlfriend”, but she and Pine have sufficient chemistry and, at the very least, she gets more involved in the plot than many characters of this type do. The relationship between Ryan and Cathy is believable, and Costner gets to deliver the fantastic line “This is geo-politics, not couples therapy!”

Branagh pulls double duty: the Royal Academy of Dramatic Art-trained thespian not only directs but plays the villain, going from Prince of Denmark to Oligarch of Russia. The character is a stereotype through and through, thick accent, ruthlessness, love for vodka, use of a light bulb as a torture implement… he might as well be a Bond villain. This reviewer kinda misses villains of this sort in espionage thrillers; in this age where every bad guy is “morally ambiguous”, it’s nice to have a character like Cherevin to root against and to hear him utter lines such as “Partnerships are delicate, Mr. Ryan. Sometimes they end violently” and “You think this is game, Jack?!”

Jack Ryan: Shadow Recruit was pushed from a Christmas 2013 release date to Janu-“dump month”-ary, but it does feel like something that could have occupied a late-summer spot as something to see after all the humongous blockbusters have left the theatres. It’s nothing we haven’t seen before but director Branagh manages to balance a somewhat old-fashioned spy thriller sensibility with a post-Bourne style, fashioning a palatable, entertaining fifth outing for the heroic analyst.