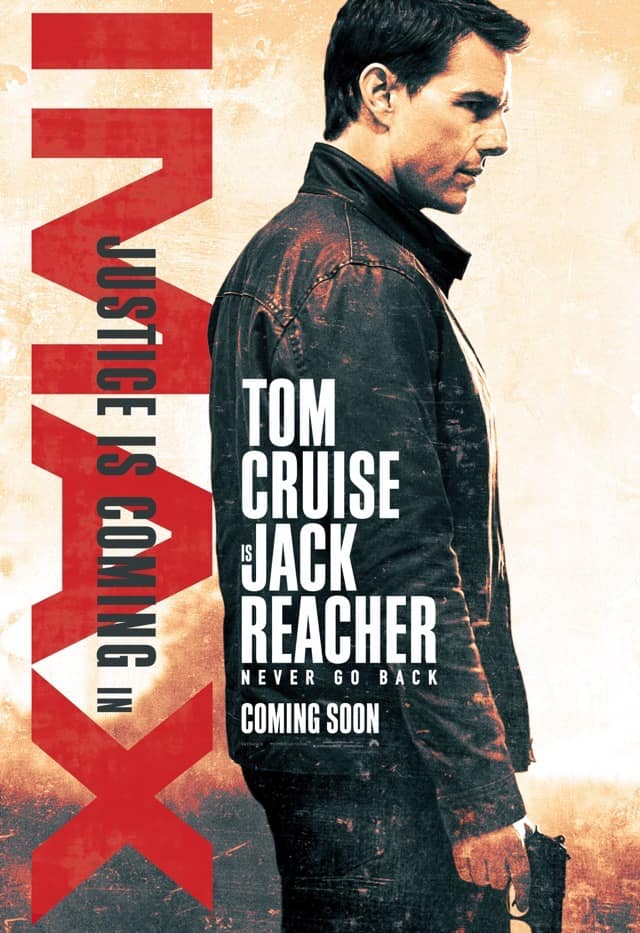 Enigmatic loner Jack Reacher (Cruise) is drifting back into theatres in this sequel to the 2012 action thriller. Reacher has been in contact with Major Susan Turner (Smulders), the commanding officer of his former Military Police unit. Turner has been assisting Reacher with cases across the country, and they’re finally about to meet face-to-face. When Reacher arrives in Washington, D.C., he discovers that Turner has been framed for espionage, after two of her men die in Afghanistan under mysterious circumstances. In the meantime, Reacher learns that a 15-year-old girl named Samantha (Yarosh) may or may not be his long-lost daughter. Reacher, Turner and Samantha go on the run, pursued by Captain Espin (Hodge) of the Military Police and a deadly mercenary known only as ‘the Hunter’(Heusinger). The Hunter reports to former general James Harkness (Knepper), who runs the private military firm Para Source, and who will stop at nothing to prevent the firm’s illegal activities from being exposed.

Never Go Back is based on the 18th book in Lee Childs’ Jack Reacher series. Fans of the novels cried foul over Cruise’s casting: was there no one more suited to playing the gruff, blonde, 240 lb, 6’5” bruiser? Anyone who was dead set against Cruise as Reacher the first time will likely be unconvinced this time around. Replacing Christopher McQuarrie, the first film’s director, is Edward Zwick, who previously directed Cruise in The Last Samurai. This is solid, meat-and-potatoes action thriller stuff, layered with military procedure that’s mildly compelling at best. We do get some satisfyingly crunchy hand-to-hand fights and a tense foot chase set against a Halloween parade in New Orleans, but nobody’s intent on reinventing the wheel here. Things keep moving at a nice clip, but when the villains’ scheme is finally revealed, it’s rather underwhelming.

While the action thriller beats are mostly generic, the character dynamics in Never Go Back shake things up a little. Reacher, Turner and Samantha are thrown together as an ad-hoc family unit: the strong silent type, the woman in charge and the moody teenager. Zwick finds just the right pitch such that the film has its intense, violent moments, but there’s also room for humour. The result is a movie that isn’t as downbeat and self-serious as it could’ve been, this lighter approach helping to offset the humdrum predictability of the main plot. There’s also a bit of a light shone on the plight of veterans who end up homeless or drug addicts after returning from combat abroad. Not an in-depth exploration of that serious topic by any means, but a glimpse of sobering reality in a largely inconsequential genre piece.

There’s not too much to say about Cruise’s portrayal of Reacher because he never really becomes the character, he’s just Tom Cruise: action star. That’s not entirely a bad thing, because Tom Cruise the action star brings with him the charisma, confidence and physicality we’ve come to expect. At 54, he seems to be sprinting as fast as ever. It’s just that as portrayed in this and the previous Jack Reacher film, our hero is altogether too close to Ethan Hunt, Cruise’s character from the Mission: Impossible film series, when Reacher as described in the books should arguably be a little older and more wizened.

If there’s one revelation out of this film, it’s that Smulders should totally be headlining more action flicks. In Never Go Back, she gets to kick significantly more ass than she has as Maria Hill in the Marvel Cinematic Universe so far. Turner uses a meat mallet and a garden hose as combat implements; Smulders acquitting herself well in the action scenes. She’s a performer with an innate likeability, and because Smulders isn’t as unyielding and severe as the stereotypical image of military woman is, it helps make Turner more of a well-rounded character. There’s a bit of a screwball back-and-forth between Turner and Reacher, and at no point does Turner come off as the designated love interest. This is something that we should be seeing more often in action thrillers.

Yarosh’s Samantha is the annoying tagalong kid through and through, but the character’s rough upbringing does earn her a bit of slack. It’s a role that would’ve been played by Kristen Stewart ten or so years ago. Hodge’s Espin, the guy whose job it is to pursue our protagonists but is just following orders, could’ve been plenty boring, but Hodge does bring the right amount of liveliness to the part.

Never Go Back does suffer in the villain department: private military contractor bad guys are, by now, pretty old hat. Heusinger’s Terminator-esque assassin, sporting scary black gloves, is occasionally frightening but lacks truly formidable presence. Harkness, the general-turned-PMC boss, is a typical Robert Knepper character, which is to say, slimy and shady. Alas, he’s far from a match for Werner Herzog, who made quite the impact as The Zec in the first film in spite of his limited screen time.

Jack Reacher: Never Go Back is unambitious but never unwatchable. While Cruise’s talents were certainly put to better use in last year’s Mission: Impossible – Rogue Nation, it’s great seeing Smulders in action heroine mode, more than holding her own opposite a star of Cruise’s wattage.