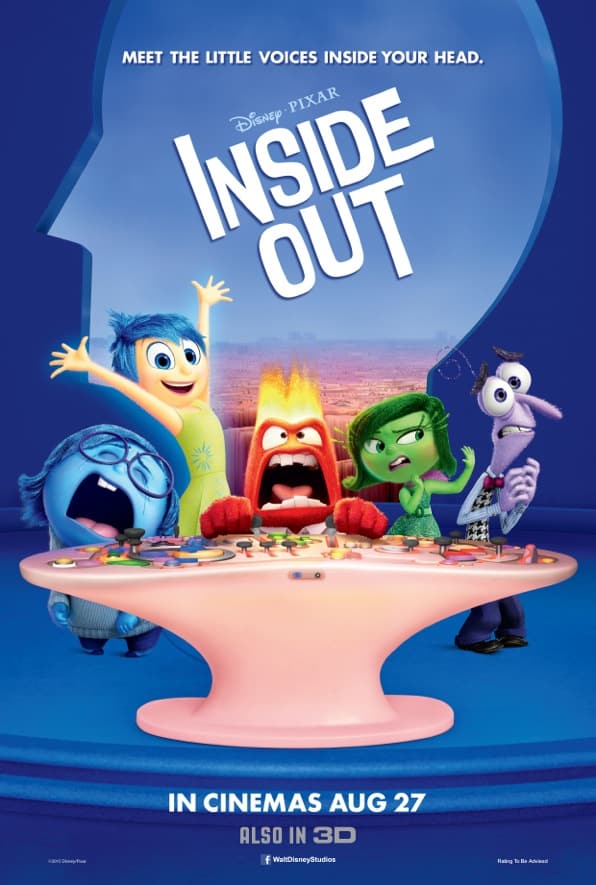 Pixar takes viewers on the ultimate head trip in this animated comedy set in the mind of an 11 year-old-girl. Riley Andersen (Dias) is a typical kid, with loving parents and a penchant for ice hockey. She begins to experience mood swings when her family relocates from Minnesota to San Francisco, and we get an inside look at why things are going bumpier than usual. The personifications of five emotions – Joy (Poehler), Sadness (Smith), Fear (Hader), Disgust (Kaling) and Anger (Black) – live and work in Riley’s mind, operating out of “headquarters”. Joy runs a tight ship and comes into conflict with Sadness, whose purpose in Riley’s mind is not apparent. When Joy and Sadness get stranded outside headquarters, they must overcome their inherent differences and find their way home to ensure Riley can be well-adjusted and happy. 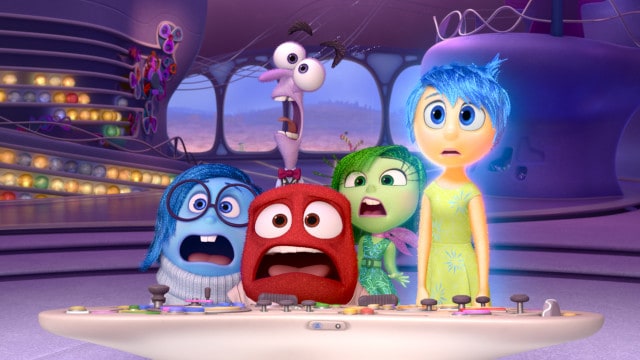 Pixar has built a reputation as a studio with a particular knack for effective, moving storytelling, and Inside Out is their strongest effort in recent memory. Many have pointed out that the premise isn’t exactly original, with 90s sitcom Herman’s Head and animated adventure flick Osmosis Jones cited as having similar premises. However, directors Pete Docter and Ronnie del Carmen, along with the Pixar story crew they assembled, ensure Inside Out is anything but derivative. Many Hollywood animated films are made for the express purpose of selling toys. Pixar has set itself apart by prioritizing storytelling, with the toy sales following naturally. They’ve even made a series of films all about toys that packed a surprising amount of emotional resonance. Everything about Inside Out just works, from the concept up, and the effort and attention to detail invested at every step of the way is all onscreen. 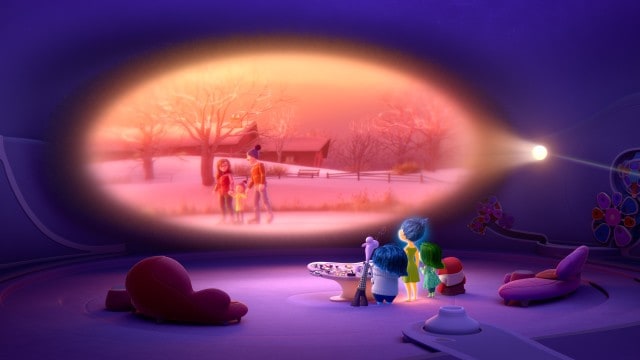 Docter has said the primary inspiration for Inside Out came from his pre-teen daughter Elie and wondered what it would be like if her emotions had personalities of their own. This starting point ensures the film is easy to relate to from the get-go, since everyone knows what it’s like to struggle with their feelings at some point or another. The film was made with the input of psychologists Paul Ekman and Dacher Keltner, and Inside Out strikes that vital balance of portraying the inner workings of the mind with sensitivity and nuance while retaining the accessibility and entertainment value the film requires. The screenwriters gamely tackle the unique challenge of creating fleshed-out characters who are explicitly defined by a singular trait, which must have taken a great deal of figuring out. The bulk of the story is reminiscent of a buddy road trip film, with Joy and Sadness traversing the labyrinth of Riley’s long-term memory, meeting various other characters in Riley’s mind along the way. The character dynamics all click right into place and there is a laudable amount of depth in these ostensible caricatures. 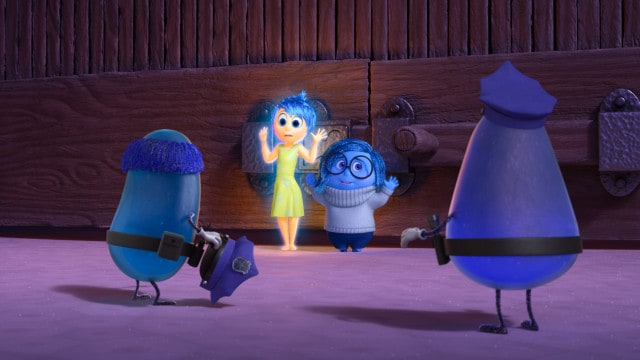 Many animated films cast big-name movie stars to draw in the parents, the fact that they might not be competent voice actors be damned. Pixar has generally avoided this pitfall and Inside Out features one of the best voice casts they’ve ever wrangled. The ensemble comprises many established comedians, including several Saturday Night Live alums. Amy Poehler and Phyllis Smith play off each other remarkably well – typically, voice actors record their parts separately with the tracks assembled later, but Poehler and Smith got to record together and their chemistry benefits the story immensely. Lewis Black, well-known for his grumpy stand-up comedy persona, is the logical choice for Anger. Naturally, it would have been easy to deliver a one-note performance, but all the voice actors are able to find wiggle room within their character’s defined personalities, not unlike how Scott Adsit was able to imbue Baymax with enough warmth while still sounding like a robot in last year’s Big Hero 6. Richard Kind, voicing Riley’s imaginary friend Bing Bong, brings whimsy and heart to the character who aids Joy and Sadness in their odyssey. 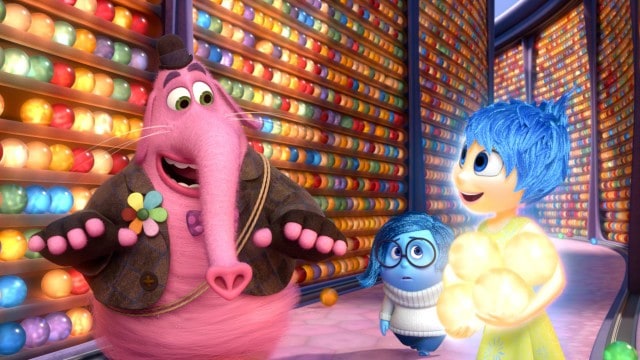 Inside Out is also expectedly gorgeous to look at, presenting a dazzling array of landscapes for the story to unfold against. Headquarters is reminiscent of the bridge of the Starship Enterprise and there is an amusingly inventive sequence set in the realm of abstract thought. The character designs are obvious but apt and the colour-coding is visual storytelling at its simplest and most effective. The skin of each of the emotions is like an effervescent plush toy and it’s a tiny design flourish that goes a long way. 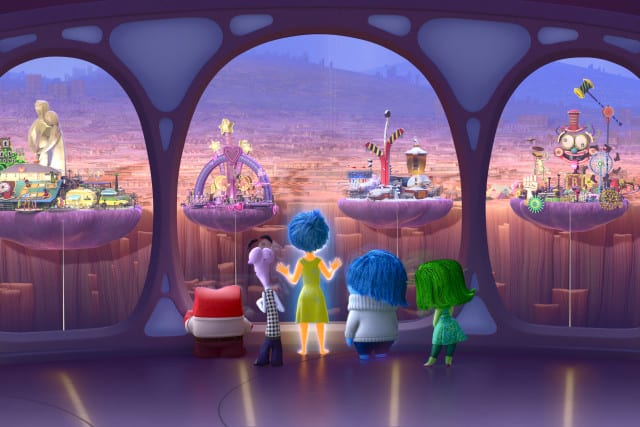 One of the most cogent and evocative explorations of mental health ever committed to the screen, Inside Out is the ideal jumping-off point for many a meaningful post-movie family discussion. It will certainly prove very helpful to children and parents struggling to understand and cope with emotional changes and conditions like depression and anxiety. It’s also a film that bears revisiting; an 8-year-old will enjoy it on one level but discover totally new aspects of the film at 13. Inside Out makes a compelling case for the necessity of sadness and other emotions that are generally perceived as negative, conveying this message through a visually-arresting adventure story. It’s also very humorous and while the term “emotional roller coaster” is thrown about a lot, it is as apt a description of Inside Out as any. Lava, the short film attached to the front of the feature presentation, has proved divisive, but this reviewer was quickly moved to tears by its charming volcano love story spanning millions of years. 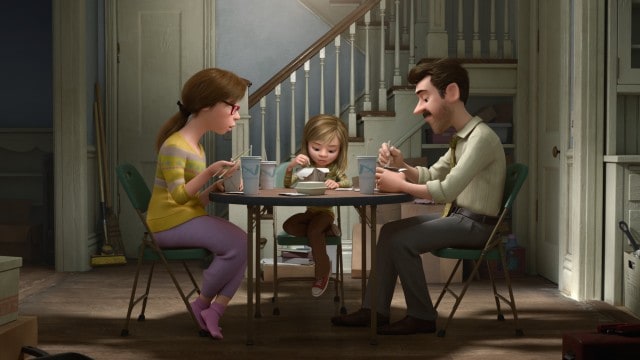 Summary: At once heart-rending and euphoric, Pixar’s odyssey of the mind is a triumph in every regard, from its story to its design to its excellent voice cast.