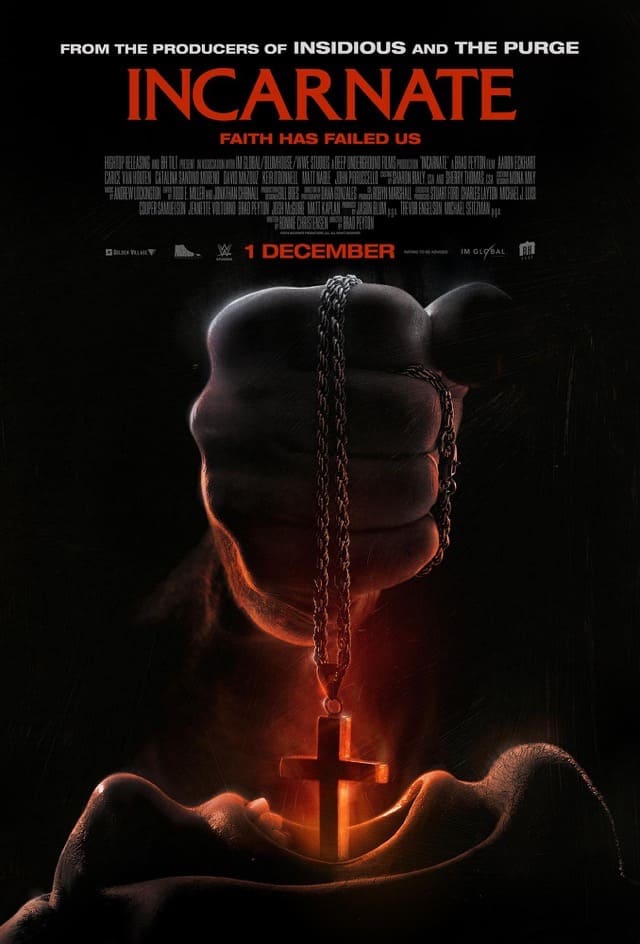 Whatever you do, don’t call Dr. Seth Ember (Eckhart) an ‘exorcist’. What others call ‘demons’, he calls ‘parasitic entities’. It’s all strictly scientific, and Ember isn’t affiliated with any religious organisation. When the Vatican sends Dr. Camilla Marquez (Moreno) to engage his services, Ember wants nothing to do with it. However, he is enticed by the possibility that the case is connected to the death of his wife and son, the same apparent accident that left him paralysed from the waist down. 11-year-old Cameron Sparrow (Mazouz) is possessed by an arch-demon. His recently-divorced parents Lindsay (Van Houten) and Dan (Nable) fear for their son’s life, as it becomes obvious that something evil has taken him over. Ember must dive into Sparrow’s subconscious to forcibly oust the entity, but will his own demons get the better of him?

Incarnate is the latest horror flick from producer Jason Blum of Blumhouse, who partnered with WWE Studios on this one. It’s easy to see why Blum was drawn to the project: what savvy producer would pass up a film with the logline “Inception meets The Exorcist”? Unfortunately, Incarnate is less than the sum of its parts.

This reviewer’s interest was initially piqued by the psychological thriller spin put on the usual supernatural horror formula: Dr. Ember proclaims himself to be a man of science, adamant against running errands for the Vatican. The execution is clumsy, with Dr. Ember’s assistant Riley (Emily Jackson) uttering the line “each of us is like a wifi hotspot” in one of those ‘explain the technical concept to a layperson’ exposition scenes. All the imagery associated with demonic possession – bodies flying across the room, pupils turning inky black, a deep spooky voice emanating from a child, and black acid spewed from the mouth – is stuff genre aficionados will find overly familiar.

While Eckhart does invest effort in playing the haunted shell of a man that is Dr. Ember, the character never becomes more than a mere assemblage of clichés. He’s a shadow of his former self, shattered after the trauma of losing his family. Eckhart apparently went method, disguising himself as a wheelchair-bound, mentally ill war veteran to yell at passers-by at Venice Beach in California. We can’t say all that effort was worth it. There is a neat device here, though: when we see Ember in reality, he’s dishevelled, but when he enters his patients’ subconscious, he’s clean-shaven and has the use of his legs.

Mazouz plays the creepy kid, bringing nothing new to the table. He’s a fine actor, but we’ve seen all the intense staring and glowing eyes before. This comes right on the heels of Ouija: Origin of Evil, in which Lulu Wilson made for a far scarier possessed child. DC Comics fans might find it amusing that Two-Face is exorcising young Batman, seeing as Mazouz plays Bruce Wayne on Gotham. As a bonus, Cameron’s dad is played by Ra’s al Ghul from Arrow. Yes, this is how we kept ourselves amused through the dullness of Incarnate.

Both female leads are talented performers: we know Van Houten from Game of Thrones, and Moreno was nominated for an Oscar for Maria Full of Grace, her first film role. Neither gets very much to do, which can’t help but feel like a waste. Ember’s assistants Oliver (Keir O’Donnell) and Riley are supposed to add some personality to the proceedings, but they’re more than a little ridiculous. It’s as if director Brad Peyton thought that if Oliver had tattoos and Riley wore necklaces and a beanie, they’d automatically be hip and with it.

Incarnate promises a mind-bending take on the supernatural horror formula, but has no tricks up its sleeves. The twist is easy to see through since it’s clear what the film’s influences are, and we get a cop-out ending as the cherry on top. Blumhouse is always on the hunt for a new horror franchise, but we hope they let this one lie. Then again, maybe they’ll pull an Ouija: Origin of Evil and make a killer follow-up.

Summary: You’ll leave the theatre thinking, “we should have gone deeper”. Inception with demons should be a whole lot more gripping than this.