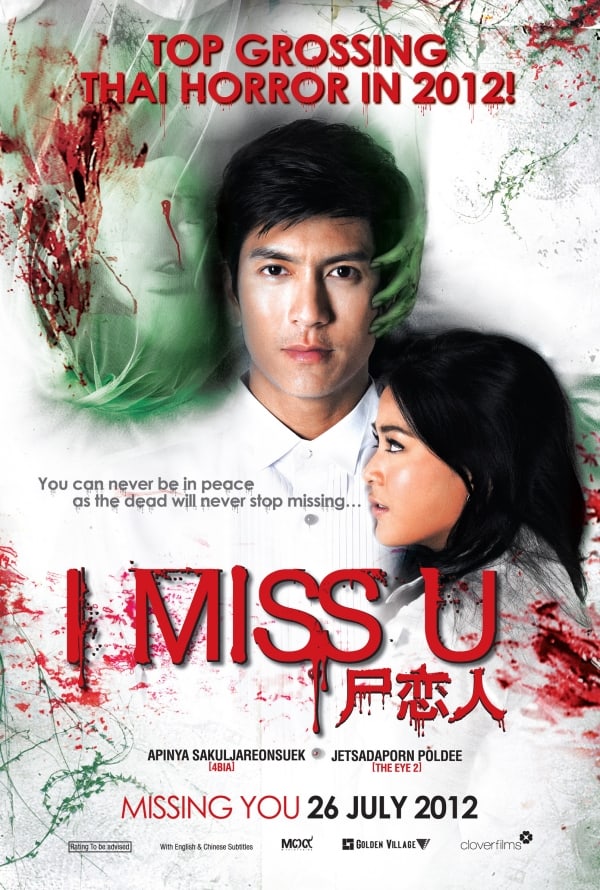 That’s pretty much the plot of I Miss You, a Thai horror film that features more saccharine moments than it does authentic scares. Apinya Sakulkraonsuk plays Dr Bee, a young first year surgeon who falls in love with chief surgeon Dr Thana (Jessadaporn Pholdee), a pensive dude who’s still strung up over his deceased wife Nok (Natthaveeranuch Thongme). The fact that he misses her makes little sense, since Nok is still around, as a ghost who’s taken in upon herself to haunt anyone who elicits interest in her husband. Talk about cock-block, huh?

Despite being marketed as a horror movie, I Miss You is more a romance than anything else. There’s even a love theme that runs through the entire movie, a pop song that repeats at choice bits of the film, and gets old by the second or so run. Director Monthon Arayangkoon attempts to fuse horror with the genre of romantic comedy, to decidedly mixed effects, which can be surmised by the uproarious laughter from the audience at supposedly scary moments. Said scary moments are generally lackluster, cliche scenes, with obligatory creepy soundtrack tacked on for added effect. To be fair though, the cinematography of the movie is generally stellar, with some beautifully shot urban locations.

If I Miss You consisted of memorable characters, its shortcomings in the horror department would be forgivable. Unfortunately, the film never really has us empathizing with any of its characters: Bee comes across as generically courageous but two dimensional, Dr Thana exudes creepy sentimentality despite his good looks, and Nok…well, she’s a ghost,t so I suppose you can’t blame her for just standing around looking scary.

I Miss You ambitiously tries to fuse romance with horror, but ends up being a patchwork creation that meanders between the two genres, and is unlikely to create a haunting impression.

Summary: A horror-romance mishmash in need of life support.