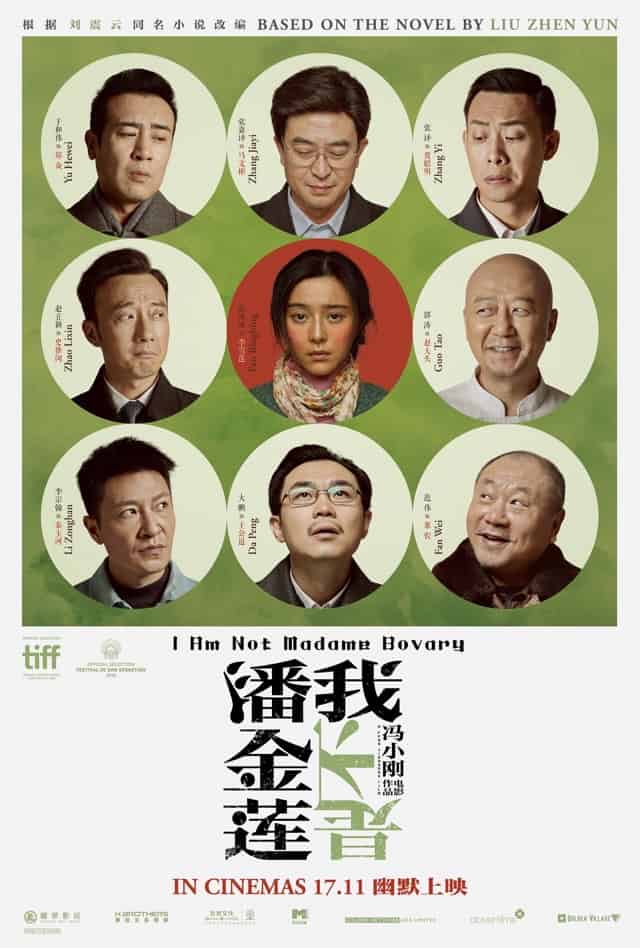 For those of you still reeling from The Donald’s triumphant installation into the Oval Office, we are pleased to announce that it’s business as usual at the movies. We are even more delighted to present a little gem called I Am Not Madame Bovary, which may well turn out to be the balm for your visions of apocalyptic doom. Instead of bemoaning the pitfalls of liberal democracy, we invite you to contemplate the tangled web of Chinese bureaucracy. Join us for a refreshing reminder that even as America goes up in flames, the rest of the world still has its own problems to face – and its own films to savour.

Let us now savour the problem of I Am Not Madame Bovary.

A gentle political satire disguised as one woman’s fight against the establishment, I Am Not Madame Bovary stars Fan Bingbing as the embattled and embittered Li Xuelian. In order to bluff her husband’s employers into coughing up a new apartment, Li divorces him with the understanding that they will remarry once the dust has settled. Unfeeling cad that he is, the husband marries another woman instead, leaving Li with no apartment, no money and no hubby. I Am Not Madame Bovary charts Li’s journey into the depths of the Chinese bureaucratic system as she tries to get the authorities to annul her divorce. Faced with one uncooperative official after another, Li’s pursuit of justice soon assumes epic proportions, stretching over ten years and taking her all the way to the National People’s Congress in Beijing.

First things first, let’s address that head-scratcher of a title. This film has absolutely nothing to do with Gustave Flaubert’s Madame Bovary (or the 2014 film adaptation), but its Chinese title does make reference to another notorious adulteress: Pan Jinlian. The film actually goes about explaining who she is very well in its opening sequence, so we’ll dispense with further details here. Suffice it to say that the film’s producers evidently felt that such a reference would be lost on non-Chinese filmgoers, therefore substituting it with a Western analogue. The result is this slightly misleading title that elides much of the film’s rich ties to China’s literary history.

Title notwithstanding, I Am Not Madame Bovary is a compelling product of the PRC’s current political climate. It’s hard to not think of President Xi Jinping’s campaign against bureaucratic corruption when Li Xuelian shows up at the home of the local judge (Da Peng) with fresh produce to sweeten the deal, or when one official assures his superior that the feast in honour of the latter’s golden wedding anniversary has not been paid for by the citizenry. The provincial-level authorities Li Xuelian comes up against are portrayed as small-minded, self-serving miscreants who bully their subordinates and fawn over their superiors. What’s being satirised here isn’t so much a form of governance as an ingrained cultural mindset, and it’s highly entertaining to watch assorted bureaucrats flap around like headless chickens when Li confounds the rule of law with her intensely personal crusade.

As the woman at the heart of the whole fracas, Li Xuelian is an immensely relatable and three-dimensional protagonist whose unwavering self-conviction is out of place in the patriarchal environs of Chinese society. Fan Bingbing turns in a commendable performance as the unwilling heroine buffeted at all turns by forces beyond her control, anchoring the film with both her star quality and screen presence. Her groan-inducing turn as Blink in X-Men: Days of Future Past (“Hyah! Hyah!”) is now officially forgiven.

On a more serious note, it’s refreshing to see a Chinese film that, for once, addresses the misogynist underpinnings of a society in which women like Li Xuelian are regularly slut-shamed for not knowing their place. The numerous injustices Li suffers at the hands of the men around her are heartbreaking, yet necessary for reflecting the lived experience of working-class Chinese women.

If one had to find fault with some aspect of I Am Not Madame Bovary, it’s that it doesn’t push its premise far enough. The final twist, while startling, is a gesture toward convention which puts a whole different spin on Li Xuelian’s struggle for vindication. The system soldiers on, with the vague promise of taking a more grassroots approach to governance the only concession to Li’s decade-long ordeal.

Summary: Hollywood’s imminent self-destruction in a frenzy of anti-Trump sentiment is no cause for despair, not if the Chinese film industry continues to produce movies like I Am Not Madame Bovary.