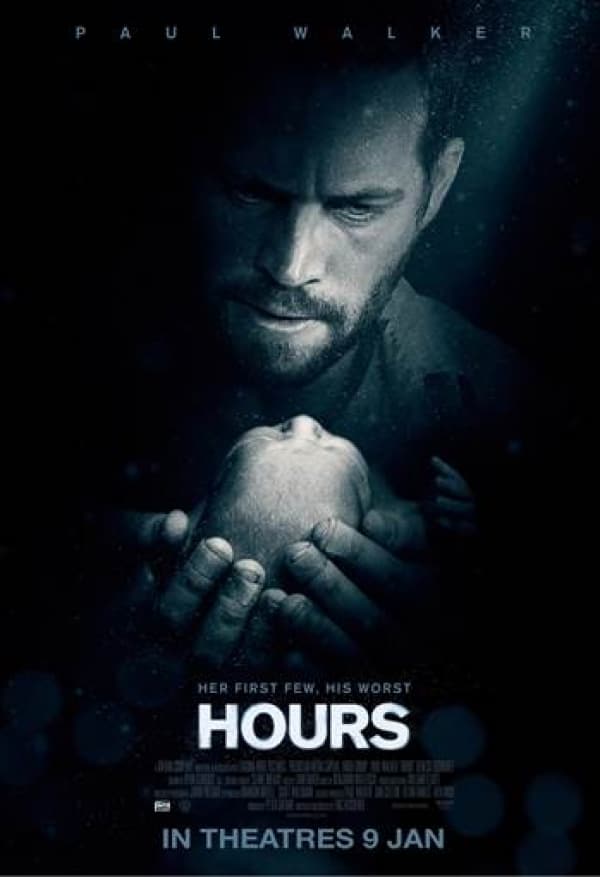 Nolan Hayes (Walker) nervously waits in the hospital as his wife Abigail (Rodriguez) gives birth to their baby daughter, born five weeks premature. What should have been a joyous day turns into an ordeal for the new father as Hurricane Katrina sweeps into New Orleans, levee failures resulting in the flooding of the city. The power in the hospital cuts out and as it is evacuated, Nolan and the infant are left alone in the building. The only source of power for the neo-natal incubator needed to keep the baby alive? A malfunctioning generator which Nolan has to crank by hand every few minutes, desperately sustaining a fragile life.

Hours is Heisserer`s directorial debut, the screenwriter having co-written horror films A Nightmare on Elm Street (2010) and Final Destination 5. He has come up with a high-concept premise for an intimate one-man-against-the-odds story, combining elements of a ticking clock thriller with the â€œtriumph of the human spirit aspect of a survival film. Also at play is the â€œPapa Wolf trope, that a man would do anything for the safety of his daughter. It`s almost like Taken, except that the daughter is hours old and that it`s Hurricane Katrina as the threat in place of a nefarious human trafficking ring. The thing is, the daughter can`t be fully developed as a character here since, well, she`s a new-born, leaving the character of the father to do all the dramatic heavy lifting.

Unfortunately, Heisserer is not entirely sure how to develop the premise and there are creaks evident in the story`s structure. Nolan`s fight to save his baby girl is interspersed with flashbacks that attempt to flesh out the relationship he shared with his wife before this incident, but they are heavily expository. The film does become something of a grind, falling into a pattern of â€œdiscover obstacle, overcome obstacle, go back to crank the generator, talk to the baby and deliver exposition. We are also brought up to speed with real news footage spliced somewhat clumsily into the film. However, the last act of the film does get interesting and there is just enough for audiences to get invested in.

Hours is squarely Paul Walker`s film to carry, the late actor spending most of its running time as the only person on screen (apart from the infant). It is especially sobering to see the recently-deceased Walker in a film with themes of mortality and survival and he acquits himself relatively well. He is charming and watchable but sufficiently intense and exhausted when the film calls for it. Unfortunately, even though this is one of his best performances, one can`t help but feel that an actor of greater stature would fit the part better. Carrying a movie this emotionally and physically draining is no mean feat and Walker does visibly struggle at times.

Director of photography Jaron Presant lenses the film beautifully, emphasizing the eeriness of the deserted hospital with lots of low angles down long corridors and slow push-ins, contrasted with the warm lighting of the incubator room. Fans of Eight Below will be delighted at the introduction of a loveable German Shepherd late in the film, but beyond the dog, Nolan doesn`t get to interact with many other characters and Walker has to power through the occasionally-unwieldy script all by his lonesome. While Hours doesn`t quite gel, the simplicity of its narrative enhances the story`s emotional impact and Paul Walker does give it his all.

SUMMARY: Hours doesn`t fully deliver on a promising concept but has its moments of heartfelt earnestness and is a decent film to remember Paul Walker by.