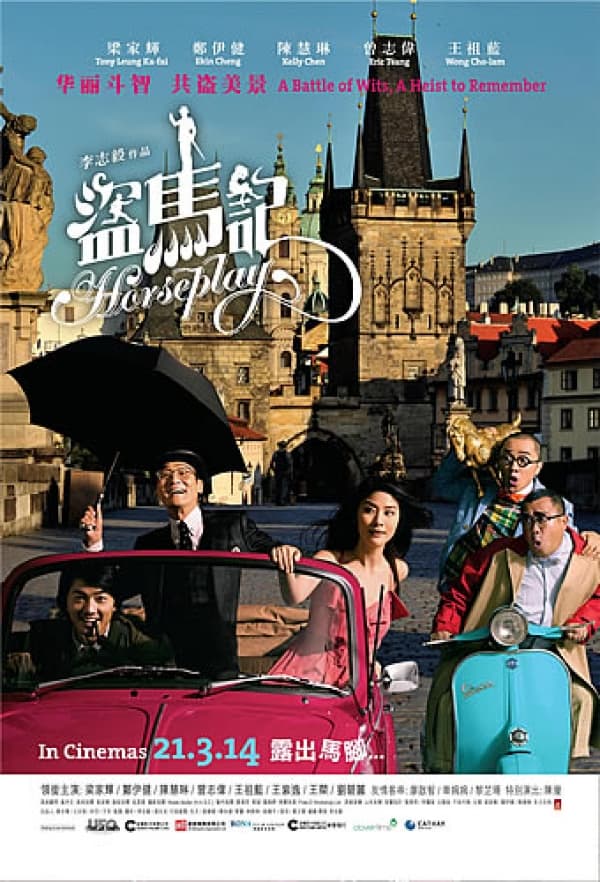 In ways big and small, Horseplay feels like a wasted opportunity. Surely this light comedy caper about stealing priceless horse figurines should have been released during the Lunar New Year – it would have coincided perfectly with the Year of the Horse. But, scheduling snafu aside, the film itself never really seems to take full advantage of its cheerful, silly premise and gleefully game cast. Instead, it’s trapped within a lacklustre script stuffed with gags that fail more often than not.

Entertainment reporter Mui (Chen) wants to be taken seriously as a journalist, and so agrees to help sniff out master thief Lee Dan (Tony Leung Ka-Fai), better known as the mysterious and very efficient Nine-Tailed Fox. With the help and occasional hindrance of police detective Cheung Ho (Cheng), Mui befriends Lee Dan as they travel from London to Prague on the trail of an invaluable pottery horse statue from the Tang Dynasty. Along the way, Mui realises that Lee Dan is not who he appears – or claims – to be.

There’s no doubt that writer-director Lee Chi Ngai wants Horseplay to be a jaunty, light-hearted romp. He drops an emotional hint or two at Lee Dan’s backstory but the real point of the film is to, well, horse around. And so, from its animated intro to the chirpy music video that plays out over the end credits, Horseplay is packed with odd characters (like a pair of bumbling historians played by Eric Tsang and Wong Cho-Lam and Mandy Lieu’s constantly foiled assassin) and ridiculous situations (a tedious cat-and-mouse fumble through a costume-donning, riddle-solving game of some sort).

It should be fun and feather-light; instead, it’s laboured and very far from the breezy, cheerful experience it clearly wants to be. For a film packed with so many gags, it’s got a remarkably low hit rate. Even more egregiously, it squanders the efforts of its cast on poor attempts at humour. Leung, in particular, is called upon not only to engage in the ignominy of blackface, but also to do so while decked out in a nun’s habit. We’re pretty sure no offense is meant by it, but it’s still a tasteless, unfunny joke that’s sadly characteristic of Lee’s weak script.

To be fair, there’s a little fun to be had thanks to the cast and the cinematography. Chen, Leung and Cheng all look like they’re really enjoying themselves, which surely proves that they’re great actors. And they look quite lovely against the gorgeous backdrops of Prague’s dreaming spires and London’s cobblestoned streets. It’s just a shame that Horseplay never really rises above its awkward, coltish humour, instead getting increasingly tangled up in its multiple (and quite unnecessary) twist endings.

Summary: Don’t bet on this horse.