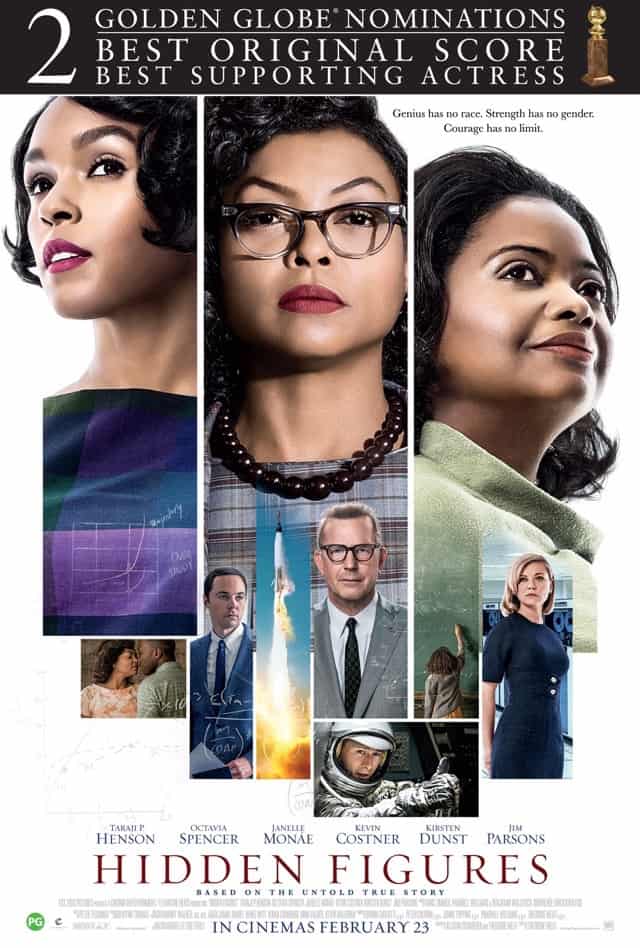 During the 1960s, the world was transfixed by the Space Race, during which the United States battled the USSR for the conquest of the final frontier. While attention was lavished on the astronauts, the engineers and technicians who made the missions possible went largely unnoticed. This film sheds light on several real-life unsung heroes who laboured to make Project Mercury a success.

It is 1962 and Katherine Goble (Henson), a mathematics prodigy, works at the West Area Computers division of NASA’s Langley Research Centre in Hampton, Virginia. Katherine’s colleagues and friends Dorothy Vaughn (Spencer) and Mary Jackson (Monáe) are also part of a group of female African-American “computers”, who performed complex calculations manually before computers as we know them today were in widespread use.

Katherine is assigned to the Space Task Group overseen by Al Harrison (Costner), becoming the only black woman amongst the group of white engineers. She earns the contempt of head engineer Paul Stafford (Parsons), whose calculations she double-checks. Dorothy appeals for a promotion to supervisor, which is rejected by her manager Vivian (Dunst). Concerned that the installation of the IBM 7090 computer will render her and her team obsolete, Dorothy teaches herself the programming language Fortran and trains her colleagues in it. Mary yearns for an engineering job at NASA, but is required to take extra University of Virginia classes, which are held in an all-white high school, to qualify. Mary makes her case to attend said classes before a judge. With the Americans and Soviets neck-and-neck, the contributions made by Katherine, Dorothy, Mary and their peers are key in the success of the American space program.

Hidden Figures is based on Margot Lee Shetterly’s non-fiction book of the same name, which is subtitled ‘The Story of the African-American Women Who Helped Win the Space Race’. Lee’s father worked as a research scientist at the Langley facility, and she grew up among African-American families with members who worked at NASA. Lee’s book was adapted for the screen by Allison Schroeder and Theodore Melfi, with Melfi directing. True stories like this are why the biopic subgenre exists, and the story of the African-American women who launched a rocket through the glass ceiling is one that absolutely deserves to be told on the big screen.

The obstacles that stood in the way of these women were numerous, seeing how they were marginalised for both their race and their gender. Hidden Figures provides ample historical context, with Katherine, Dorothy and Mary standing at the intersection of the Civil Rights movement and the Space Race. Because this is a story about mathematicians, it can get dense and technical at times – this reviewer will be first to admit to being terrible at and intimidated by maths. The film does not dumb down this crucial element of the story, and great pains are taken to credibly portray the process of calculating trajectories or programming the IBM 7090.

Henson’s lead performance is engrossing and mesmerising. She portrays Katherine Goble as someone who is as passionate as she is hardworking, since Katherine did not have the privilege of merely coasting on her innate talent at mathematics. After her husband James dies of a brain tumour, Katherine and her mother Joylette (Donna Briscoe) are left to care for Katherine’s three children. The film’s romantic subplot, in which military officer Jim Johnson (Ali) woos Katherine, is just the right level of sweet.

While Henson’s Katherine gets the most screen time out of the three leads, Dorothy and Mary get their own satisfying arcs as well. Dorothy’s drive in getting ahead of the curve so as not to be displaced by the newly-installed machines is rousing, while Monáe brings a confident feistiness to Mary, the most outspoken of the trio. Between this film and Moonlight, singer-songwriter Monáe is proving that she possesses not only impressive pipes and stage presence, but considerable acting chops too.

Costner is a dependable presence as the firm but fair director of the Space Task Group. However, the supporting characters are where some of Hidden Figures’ authenticity is eroded. Composite characters are common in films based on a true story, and it turns out that “Al Harrison” is an amalgamation of three different directors at NASA’s Langley facility. This was done because Melfi was unable to secure the rights to portray the real-life NASA director. Both Parsons’ and Dunst’s antagonist characters are also fictional. They serve to embody the general prejudices of the times without being over-the-top villains, but also give the story a slightly Hollywood-ised feel. On the other hand, there’s actual historical figure John Glen, portrayed with winsomeness and good-natured charm by Glen Powell.

Hidden Figures is by no means a subtle film, but the racism of the time was far from subtle. This is a prestige picture that does not radiate hollow self-importance, but shines a light on little-known heroes who had the deck stacked against them. Thanks to this film and the book on which it is based, the contributions of Katherine, Dorothy and Mary remain hidden no longer.

Summary: While it’s fashioned as an awards season crowd-pleaser, the importance of Hidden Figures can’t be denied. More than just a history lesson, this film is genuinely inspiring and its message is as pertinent as ever.