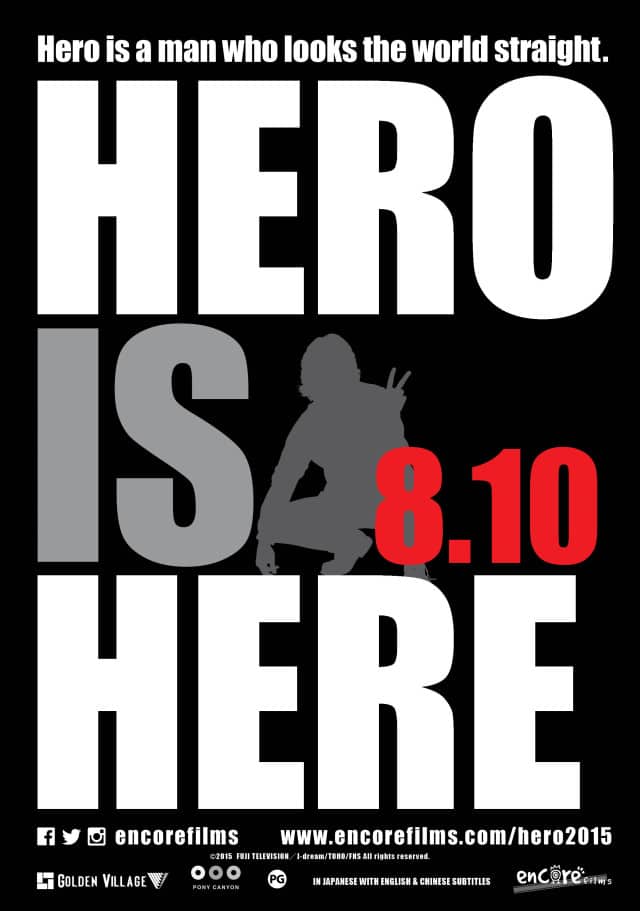 A fair number of the movies that inundate our local cineplexes come across as a waste of movie-making resources, because they either needlessly extend an already over-extended franchise or just don’t quite justify being made in the first place. Hero 2015, the latest installment in the phenomenally popular Hero franchise, has precisely that unfortunate quality of superfluity, but nevertheless manages to charm and delight its way into audiences’ hearts. A hearty dose of early-noughties nostalgia and a charismatic ensemble cast also boost proceedings considerably.

Hero (not to be confused with Zhang Yimou’s film of the same name) started out as a ratings-smashing Japanese drama in 2001, starring heartthrob Takuya Kimura as eccentric public prosecutor Kuryu Kohei. The series later went on to spawn a TV special in 2006, a movie co-starring Lee Byung-hun in 2007 and a second drama series in 2014, all of which were also highly feted within Japan. Hero 2015 reunites Kuryu with his former para-legal and ex-flame Maiko Amamiya (Matsu), even as he continues to be assisted by rookie Chika Asagi (Kitagawa) in his routine cases. When the suspicious death of a key witness brings Amamiya up to Tokyo from her Osaka base, Kuryu must work with her to uncover a conspiracy that extends into both the lofty realms of international diplomacy and the seedy depths of Tokyo’s underworld.

The superfluity within Hero 2015 stems primarily from its plot, which doesn’t seem to do very much with the characters that hasn’t already been done before, and which isn’t even much of a mystery or conspiracy to begin with. There are the shady diplomats from a fictional European country, the standard yakuza link and an array of plot twists that can be described as ‘meh’ at best. Simply put, Hero 2015 lacks dramatic tension, a weakness exacerbated by its episodic structure. One is tempted to overlook this failing in light of the fact that filming for the movie commenced almost immediately after the second drama series wrapped production, but the number of times Amamiya travels back and forth between Tokyo and Osaka, disrupting the flow of the narrative in the process, is frankly ridiculous. Events appear to be segmented in their own little boxes rather than linking up into one cohesive whole.

It’s some consolation, though, that these little boxes are the cinematic equivalent of a bento set chockful of delightful goodies. The offbeat humour and comically over-exaggerated mannerisms that characterise the entire Hero franchise are in full force here, as the full cast of oddballs comprising the Tokyo West District Prosecutor’s Office returns to tickle the audience’s funny bone. The splicing of the TV show’s original opening theme song and trademark cast introduction sequence into the film is also one disruption to the narrative that will be more than welcome for long-time fans of the franchise. Hero 2015 exemplifies that idiosyncratically quirky tone and flavour that will make anyone who isn’t Japanese shake their heads bemusedly, smile and remark, “Only in Japan”. And that’s a great thing, because it takes the pressure off the weak plot and focuses attention on the film’s strengths instead.

Any review of Hero 2015 would be remiss if it didn’t at least refer to lead actor Kimura in passing. Kimura is now 42 and the father of two pre-teens, but his irrepressible charm and smoldering charisma take one back to the heady days when Japan was still the world’s second-largest economy and the undisputed cultural powerhouse of Asia. The palpable chemistry between Kimura and co-star Takako Matsu, which was one of the reasons the original TV series broke viewership records in the first place, more than justifies the price of admission, as Kuryu and Amamiya struggle to rekindle a relationship that has been in cold storage for eight long years. Keiko Kitagawa’s Asagi is somewhat sidelined as a result, but still gets a reasonable amount of screen time, especially in the cultivation of a friendship with Amamiya, where the two swap horror stories about Kuryu’s eccentricities.

Hero 2015 does an admirable job of marshalling the franchise’s greatest strengths of characterisation, star power and a unique brand of humour, but mystifyingly stumbles on the intrigue and political shenanigans that any self-respecting legal drama should possess. The resulting film feels a little like a waste of movie-making resources, but somehow one that is unlikely to be regretted (much).

Summary: Not enough pace, plot or pulse, but plenty of crowd-pleasing throwbacks to the original series propel Hero 2015 forward.