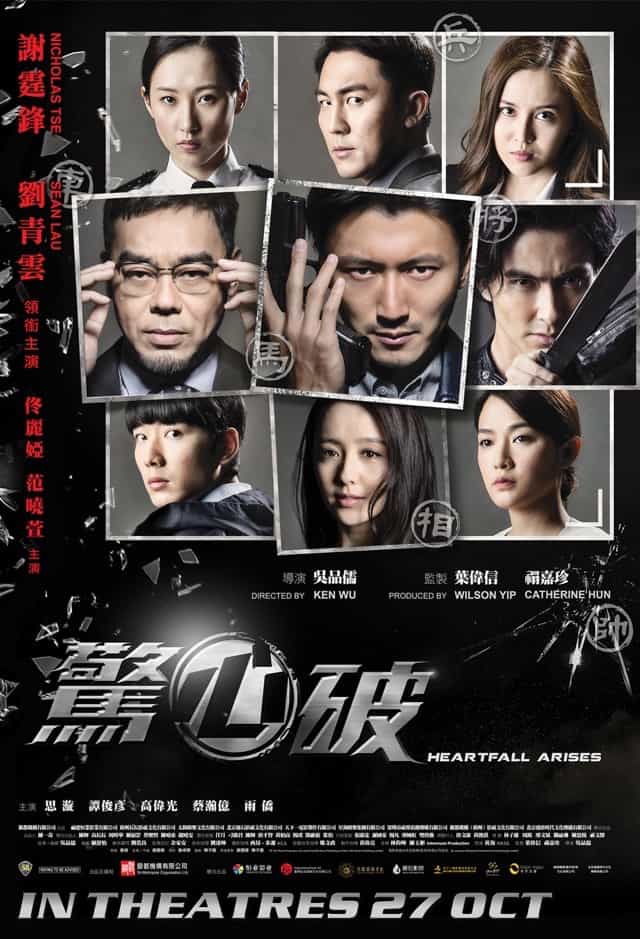 Following The Bullet Vanishes, Nicholas Tse and Sean Lau reunite in this psychological action thriller under the debut direction of Ken Wu. Despite a promising story premise and its award -winning leading male duo, the film however suffers from over-promise and under-deliverance.

As if the concept has not been rehashed enough times in novels, films and television, Heartfall Arises recycles yet again the clichéd theory of whether an organ transplant might result in a significant change in behaviour and personality in the recipient/recipients due to residual cell memories being carried forward. Apparently, this film is the result of a decade-old dilemma revolving around this subject matter that has been perplexing the mind of director Wu, as can be seen by his referencing of University of Arizona’s Professor Gary E. Schwartz’s quote regarding cell memory in this film.

In addition, perhaps inspired by the 1988 critically-acclaimed Chinese film Chess King, Heartfall Arises attempts – the keyword here being ‘attempts’ – to set itself apart from other Chinese psychological crime-thrillers by basing its core theme upon the intellectual game of Chinese chess. Not only is the crux of the major plot adapted from a Chinese chess move known as ‘Seven Star Combination’, even the names of the key characters of the film are derived from Chinese chess pieces. Tse, Lau and Vengo Gao’s respective roles of Jiang Jun, John Ma and Calvin Che and even the supporting character of Tong Liya’s Chen Xiang Ru are therefore the equivalent of the General, Horse, Chariot and Elephant game pieces from the chessboard.

The movie literally begins with a bang, with Tse’s good cop character Ma being inflicted with a gunshot wound to his heart while gunning down and killing a vigilante serial killer General (Gao). Fortunately, Ma is saved by a successful heart transplant thereafter. As luck would have it, it’s during this recovery period at the hospital that Ma gets acquainted with Lau’s criminal psychologist character, Che. Both being patients in recovery at the same hospital, the two cross paths over, as you might have guessed it, a game of Chinese chess.

Fast track to a-year-and-a-half later and the pair are reacquainted under the trying circumstances of cracking a highly-classified case where a series of murders and international crime cases are committed in an uncannily similar fashion as that of the deceased General. To further complicate matters, during one of the criminal showdowns that follows thereafter, Ma comes face-to-face with the presumed new mastermind who turns out to be the splitting image of the General.

With the doubt of whether Jiang is truly as dead as it seems looming, more uncertainty arises when it is revealed that there is more than meets the eye with Che’s character, as his dark secrets surface in the course of the case’s investigation. As audiences may have predicted by this point in the film, it is no mere coincidence that he and Ma were staying in the same hospital at the same time. The two definitely share more than just aptitude at the game of Chinese chess. And, as most might have guessed, it ties in with director Wu’s perplexing dilemma.

It all sounds extremely promising on paper – a different take on an Asian psychological crime-thriller albeit tackling a clichéd concept, capitalising on the novel use of Chinese chess for its central theme, and the casting of two Hong Kong Film Best Actor Award winners for its leads. However, the result is significantly less remarkable as the film completely wastes the potential of its premise and cast with its lacklustre story execution, poor characterisation and muddling plot twists aplenty.

To balance out the machismo, Wu may have tried his best by incorporating three core female characters played by Tong Li Ya, Mavis Fan and Sheren Tang, but the zero chemistry between them and the leading men eventually leads to the trio floundering onscreen.

Furthermore, there’s also the complete mishandling of its central concept, resulting in much online flak from critics on the absurdity of selective transference of cell memory between the two male lead characters. Indeed, upon reflection, Wu would probably realise his folly of assuming that audiences would readily accept how, despite having both characters gone through the same procedure, that one’s personality is radically altered on one hand, while the other only has slight changes in his personal meal preferences. And then there is his incomprehensible decision of completely disregarding it altogether in the film’s finale, resulting in the wastage of all the effort in building up the premise for the majority of the film, which doesn’t help quell the audience’s anger in being engaged in a concept that never comes to fruition by the end.

With Hong Kong cinema coming under fire in recent years by critics and the public for its downward decline as a result of its production of a multitude of sub-par films, Heartfall Arises does little to change that perception and, instead, might just be yet another nail in the sealing of its coffin.

Summary: Even the Best Actor award-winning duo of Nicholas Tse and Sean Lau can’t save this film from its doom of having a potentially brilliant theme brought to waste under the debut direction of Ken Wu.