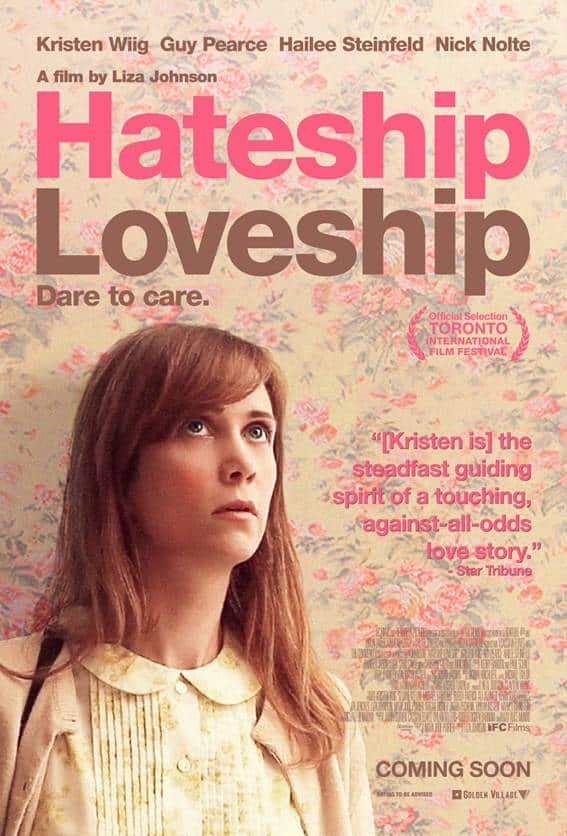 “Dying is easy,” so they say. “It’s comedy that’s hard.” That’s why it’s always so thrilling to see comedians stretch their wings a little and try a little bit of dramatic acting for a change – frequently, their performances are all the more affecting because they’re acutely aware of the fineness of the line that exists between comedy and tragedy. Kristen Wiig, of Saturday Night Live and Bridesmaids fame, proves this to be true with her first stab at the almost purely dramatic in Hateship Loveship, although she’s ultimately let down by an overly wooden script and character.

Johanna (Wiig) is a caregiver who leads a nomadic existence, packing up what little there is of her life to move into whichever household requires her services next. When she arrives at the McCauley home, she meets the motherless Sabitha (Steinfeld) and her alcoholic, undependable father Ken (Pearce). Wilfully bristling at the new addition to the family, Sabitha plots with her best friend Edith (Gayle) to play a practical joke on Johanna: they craft a letter of clear amorous intent from Ken in response to Johanna’s simple thank-you note.

It’s a situation that could easily be played for comedy or for tragedy: the misunderstanding created by the two girls blossoms into a one-sided love affair for Johanna, so good at cleaning up people’s lives but so inexperienced at living her own. Hateship Loveship settles for an uncomfortable mix of the two, often trading awkward, neo-farcical humour for genuine insight into Johanna’s psyche. When Johanna decides to commit fully to her ‘relationship’ with Ken, the film stumbles into almost horrifying territory. It’s difficult to know just how to respond to Johanna’s predicament and Ken’s understandably shocked reaction to her arrival in his life, just as it’s tough to really buy into the way their relationship develops thereafter.

For the most part, the clumsiness of the film has little to do with its cast. Wiig bravely underplays her part, hinting at rather than telegraphing Johanna’s soul-deep loneliness and craving for a family of her own. It’s unfortunate that her character takes on a near-robotic cast so early on in the film. Pearce manages to be both charming and off-putting as Ken, while Nolte makes his mark on the film as Sabitha’s caring but clueless grandfather. Steinfeld, while perfectly fine in her part, is largely upstaged by the chirpy meanness evinced by Gayle – who, unfortunately, is also let down by the fact that Edith is almost purely the villain here, and bears none of the subtle characterisation she enjoys in Alice Munro’s original short story.

Taking a step back from the film, its themes and intent become more readily apparent: families can be forged, just as relationships and love can, out of hate, resentment and misunderstanding. But, buried beneath a few extraneous subplots and some really patchy writing and character development, it never entirely comes clear when you’re actually watching Hateship Loveship. Fittingly, for a film that isn’t quite sure what it wants to be, it’s tough to know whether one should laugh or cry in response.