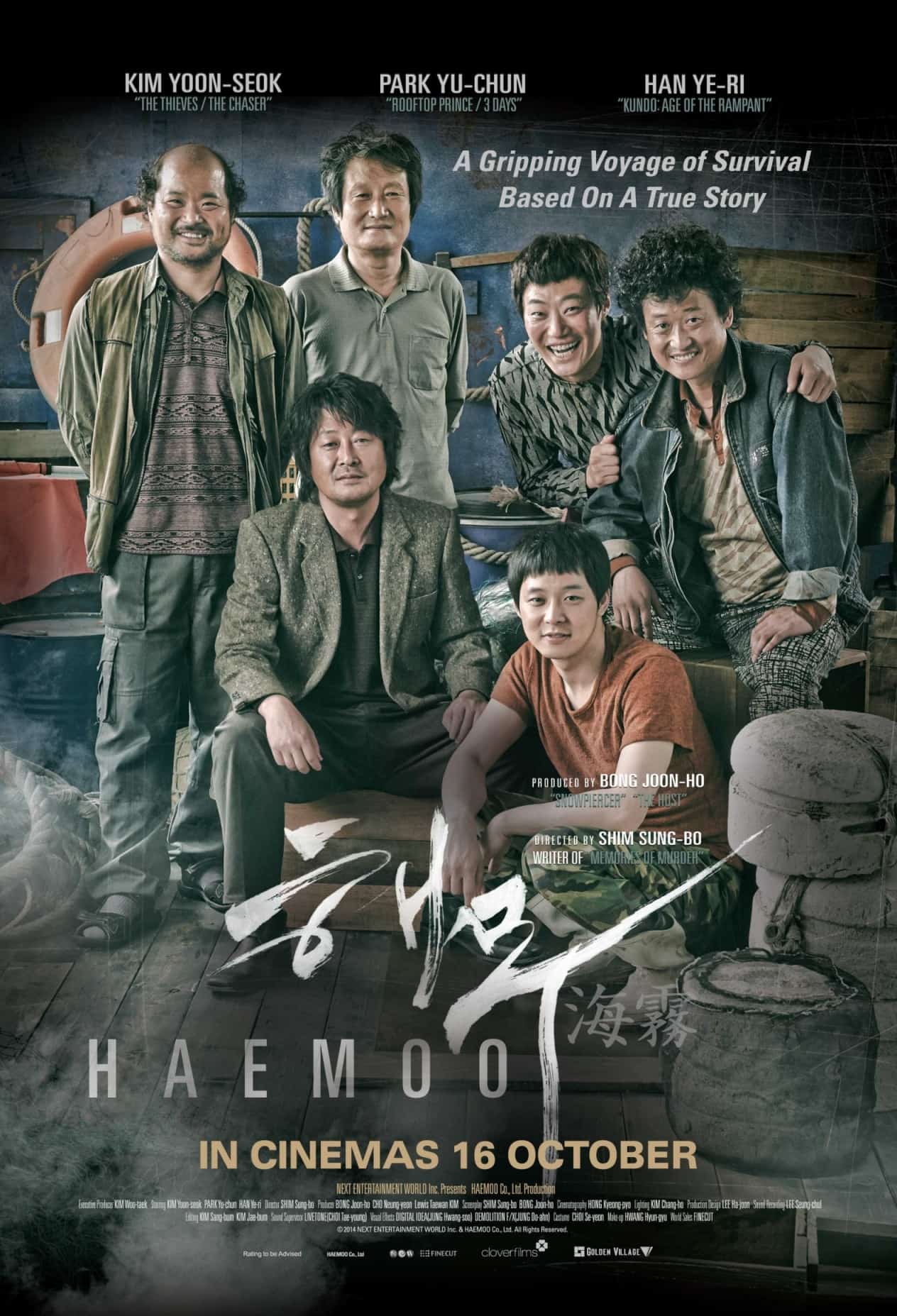 There are some movies that are destined to be crowd-pleasers and others that alienate an audience to the point of wordless shock or contemplative silence. Neither type can really be said to be ‘better’ than the other, but Haemoo, which falls squarely into the latter category, nevertheless makes a number of puzzling concessions toward crowd-pleasing. This results in a film that blunts the force of its own bleak musings on humanity and corruption. 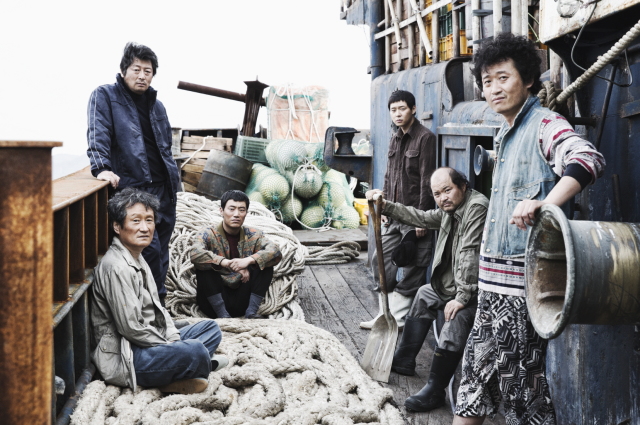 Based partially on true events, Haemoo (Korean for sea fog) is set during the immediate aftermath of the 1997 Asian financial crisis, when the worst has already hit but the common people are still experiencing its effects. Captain Cheol-joo (Kim Yoon-seok) is the head of a fishing crew that has fallen on hard times, and in one last desperate attempt to keep himself afloat, Cheol-joo makes the fateful decision to help smuggle illegal Chinese-Korean immigrants onto South Korean land aboard his fishing trawler. The other crew members, including sex-starved Chang-wook (Lee Hee-joon) and greenhorn Dong-shik (Park Yoochun), aren’t so keen about this expansion in their job scopes, but the captain’s orders are the law. The crew is ill-prepared for the flood of illegal immigrants boarding their humble vessel, and the situation is further complicated by Dong-shik’s budding relationship with Hong-mae, a young female immigrant (Han Ye-ri). When tragedy unexpectedly strikes, each member of the crew has to decide just how far he will go in order to protect the things he cares most about. 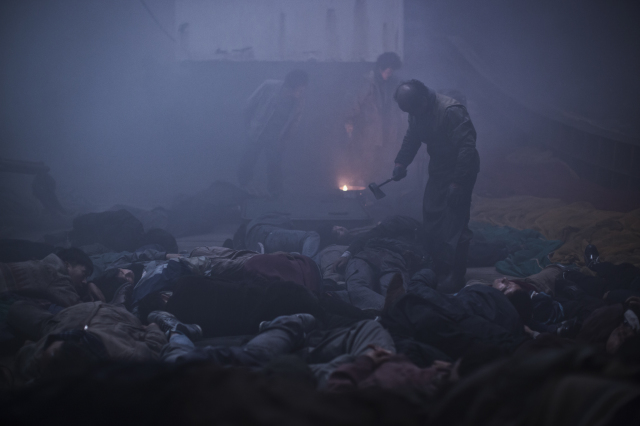 As already mentioned, Haemoo is a movie that prides itself on an unflinching representation of life as it actually happens, rather than what people hope it to be. The crew members lead sad, unfulfilled lives where moments of joy have recently been in short supply. One older woman among the illegal immigrants has no illusions about the goodwill of others and prostitutes herself out just to spend the night in a warmer part of the ship. It’s not all doom and gloom (situational humour abounds and there are a couple of laugh-out-loud zingers), but generally you get the idea that this isn’t the sort of movie where everyone gets a happy ending. The crew members, for the most part, become less and less likeable over the course of the film as they get embroiled in a quagmire of their own bad decisions and base urges, but one character does get to come out of the proceedings still smelling like a rose: Park Yoochun’s Dong-shik. 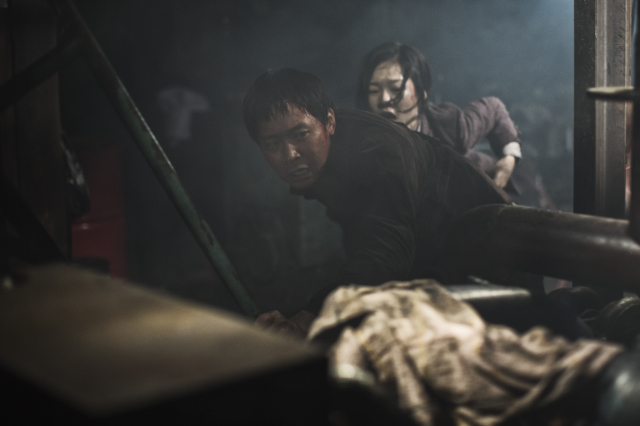 This reviewer isn’t sure if the relative moral scrupulousness that Dong-shik displays is some kind of concession to Park’s legions of screaming fangirls and his idol status (he’s also a member of K-Pop group JYJ) or a peculiarity of the script itself, but it’s precisely Dong-shik’s rather square personality and the abnormal speed at which his relationship with Hong-mae progresses that undermine the film’s realist sensibilities. The rest of the crew, especially Kim Yoon-seok’s tour-de-force performance as the vicious yet pathetic Cheol-joo, are so well-rendered, flaws and all, that Dong-shik comes off as flat and unrealistic in comparison. Dong-shik participates in a fair share of the grisly events inundating the film’s second half, but somehow one feels that he’s never actually compromised morally by his actions. The disconnection between Dong-shik and the stewing pit of corruption the other characters fall into is Haemoo’s Achilles heel, though it might be going too far as to call it a fatal flaw. 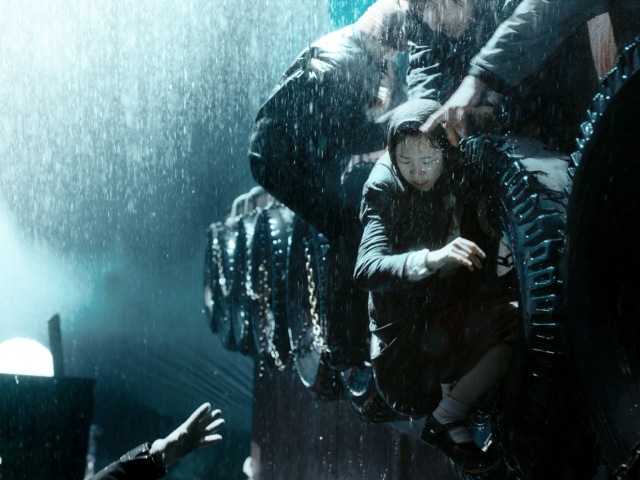 As South Korea’s submission for the Best Foreign Language Film at the 87th Academy Awards, Haemoo still has a lot going for it in spite of that one jarring misstep. It’s a vastly atypical representation of South Korea, far displaced from the glittering lights of Seoul, it doesn’t flinch from portraying controversial issues such as xenophobia and rape, and the actors, even Park Yoochun, surpass themselves to deliver the performance of a lifetime. Only time will tell, though, if Haemoo’s concessions toward a more conventional narrative will endear or repel to the Academy’s voters.

Summary: Like a Rembrandt that has been tarnished by an ink blotch, Haemoo mostly impresses but fails to overawe due to a single costly error.