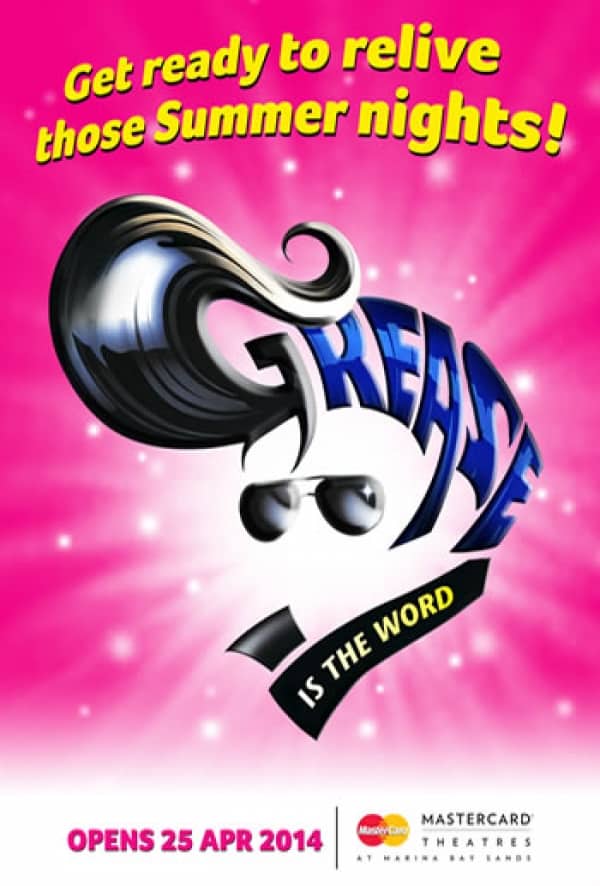 It’s automatic, it’s systematic, it’s hydromatic and now Greased Lightning has pulled up to the Grand Theatre at Marina Bay Sands in Singapore. The musical Grease by Jim Jacobs and Warren Casey, which debuted in Chicago in 1971, has remained in the public consciousness for over 40 years. This is thanks in part to its hugely popular 1978 film adaptation that starred John Travolta long before he was swapping visages with Nicolas Cage or mangling the names of Broadway stars/Disney movie voice actors. Co-starring Olivia Newton-John, the film was a smashing success, and is still the top-grossing musical film in the United States to date.

Set in 1959 at Rydell High School, Grease tells the story of Danny Zuko’s romance with Australian lass Sandy Dumbrowski, with whom he shared a summer fling. Much to both their surprise, Sandy stays on and attends Rydell High. Danny is a greaser of the T-Birds gang, while Sandy hangs out with the popular clique of girls known as the Pink Ladies. A coming-of-age tale featuring such familiar themes as adolescent rebellion, friendship and young love set against a particularly nostalgic backdrop, it’s easy to see why so many hold Grease so dear.

Above anything else, Grease is a lot of fun. It’s an idealised view of the ’50s, offering up caricatures of the different types of students populating any given American high school at the time and, of course, featuring actors who all look way too old to be high schoolers but who give it their all anyway. The humour is more slapstick and pantomime than in the movie, but it works on stage and there’s an earnest silliness that’s not obnoxious or self-conscious. The show’s definitely better when it’s in comedy mode than during its dramatic moments. Following a sold-out Australian tour, this David Gilmore-directed production will return down under after its Singapore leg.

Featuring enjoyable number after enjoyable number, those memorable Jacobs/Casey tunes (with additional songs by John Farrar, Louis St. Louis, Scott Simon and Barry Gibb) are enhanced by Terry Parsons’ set design and Andreane Neofitou’s costumes. The interior of the Burger Palace is period-accurate and authentic while Marty’s room is stylised, with something of a Dr. Suess flavour to it, neon hearts descending from the rafters during “Freddy My Love”. Of course, there’s also the transformation of a beat-up jalopy into the glittering Greased Lightning, during the song of the same name.

The choreography by Arlene Phillips is also entertaining, featuring several spots of dirty dancing and a trio of towel-clad jocks swaying their hips to “Those Magic Changes” in a scene set in the locker room. The orchestra, led by music director/keyboardist Luke Hunter, is positioned in an elevated alcove, spending most of the show hidden by backdrops but revealed during several numbers. The orchestra has costume changes too – starting the show in polyester pink shirts, then sporting leather jackets and then bejewelled blazers.

Stephen Mahy stars as Danny, promoted to the male lead after having played Kenickie during the Australian tour. Bearing a passing resemblance to Johnny Knoxville, he’s sufficiently charismatic and has good comic timing even if his vocals aren’t quite as strong as Gretel Scarlett’s. As Sandy, Scarlett gets to keep her Australian accent and is sweet and charming, utterly nailing the show-stopper “Hopelessly Devoted to You”. Of the T-Birds, Scott McConnell as Doody is the stand-out, effortlessly crooning “Those Magic Changes”. Lucy Maunder is a commanding presence as Rizzo if not completely tough-as-nails and Jason Capewell threatens to steal the show in his dual roles as DJ Vince Fontaine and the Teen Angel, hitting those super-high notes in a most fabulous fashion.

The opening night performance featured a cameo appearance from local DJ Vernetta Lopez of oldies station Gold 90.5. While she was clearly having fun, her comic improv skills did leave much to be desired. If you’re a fan of the film, seeing Grease live will certainly be a thrill, but do be advised that many iconic images from the movie are absent (this reviewer was looking forward to Sally and Danny riding off into the sunset in Greased Lightning, but that didn’t happen) and the story structure is somewhat different from how it’s presented in the movie. At the end of the night, it was clear that “Grease” pretty much still is the word. If you’re in the mood for some fun, glossy nostalgia, break out the pomade, slick back your hair and make a date with the T-Birds and the Pink Ladies!