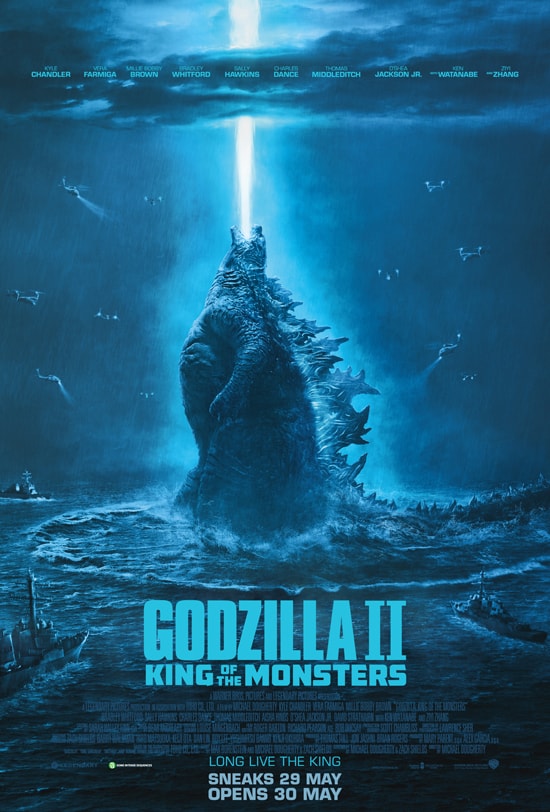 The Low-Down: With Marvel raking in the cash and plaudits after creating the world’s most epic cinematic universe, every studio that can thread movies together – however tenuously – is hopping on the bandwagon. And so we have Godzilla II: King Of The Monsters: the third installment in Legendary Pictures’ MonsterVerse, following Godzilla (2014) and Kong: Skull Island (2017). It’s easily the most ambitious film yet, uniting several classic critters straight out of Godzilla lore and finding pretty much any excuse to have them fight one another. The final result is both bold and bonkers – good and bad, often in the very same moment.

The Story: Monsters break stuff, including people. It’s a fact of life that the broken Russell family must deal with after Godzilla’s epic battle leaves downtown San Francisco in ruins. Grieving and newly sober, Mark (Kyle Chandler) stalks wolf packs in another part of the world. Emma (Vera Farmiga), his ex-wife, continues to work on the Orca, a machine they created together that can emit soundwaves capable of calming or infuriating Godzilla-scale monsters. Madison (Millie Bobby Brown), their precocious daughter, is caught in between – especially when Emma’s decision to use the Orca sets off a chain of monstrous events that could lead to the end of the world as we know it.

The Good: The concept at the heart of Godzilla II, quite frankly, is off-the-wall wacky – so bold and audacious and weird that you have to give director/co-screenwriter Michael Dougherty some credit for effort, even if his execution of it is somewhat lacklustre. This is no mere story of monsters raining mayhem down upon mankind. Instead, the film moves its mythology quite firmly into the realm of faith; Godzilla, the film suggests, is as much god as monster. It’s actually quite remarkable to see a mainstream blockbuster movie embrace – rather than shy away from – religious iconography, folding in theologies and environmental philosophies from Greek myth to Thanos. As such, Godzilla and his arch-nemesis, King Ghidorah (a three-headed Hydra-esque dragon beast), aren’t just having their version of a bar-room brawl – their earth-shaking clash is a battle for the survival of humanity.

The Not-So-Good: It’s a shame that the film as a whole can’t keep up with its high-concept ideas. The writing ranges from inspired to insipid, with character motivations dancing ridiculously back and forth – dictated mostly by the rather demented plot. As a director, Dougherty exhibited some skill with subversive comedy in cult horror flick Krampus, but very little of that is evident here. It’s not just about sacrificing soul for scale – Dougherty occasionally struggles with telling such a massive story in visual terms. Some of the film’s action sequences are so choppy as to be downright confusing. It doesn’t help that Dougherty’s preferred aesthetic tends towards the grey and grim, which makes it even harder to figure out just what is going on while monsters are duking it out in frustratingly murky lighting.

The Monster Mash: The first Godzilla film in the franchise suffered for shoving its titular monster into the background, having him play second fiddle to human characters who weren’t all that well-written to begin with. Godzilla II tries to rectify that, somewhat, by flinging so many monsters at the screen that you’d be almost glad to get back to the human drama after a while. Apart from Godzilla and Ghidorah, fans will be glad to see old-school Toho favourites like Mothra and Rodan in action too. (If they could actually see them, that is. Seriously – the monsters are beautifully rendered, but the bruise-toned lighting does them no favours.)

God(zilla)-Level Casting: If Dougherty learned one thing from his predecessor, Gareth Edwards, it’s the importance of casting a bunch of top-notch character actors in an otherwise barmy creature feature. Veteran performers like Oscar nominee Farmiga, West Wing alumnus Whitford and Charles Dance (that’s Tywin Lannister to you) reel off awkward exposition and pseudo-scientific claptrap (“bio-acoustics”, “the Oxygen Destroyer”) like it’s actual real human dialogue. It’s quite remarkable to see Friday Night Lights’ Coach Eric Taylor in action anti-hero mode, but Chandler – just as Bryan Cranston did in the 2014 film – brings an everyman weight to a character whose narrative arc is muddled, to say the least. The MVP here, though, is Brown. She brings to Madison the same soulful blend of toughness and tenderness that made her such a breakout star in Netflix’s Stranger Things.

Recommended? It depends. Godzilla II is a hot mess… but it’s a fascinating hot mess, and surprisingly fun to watch and even think about.