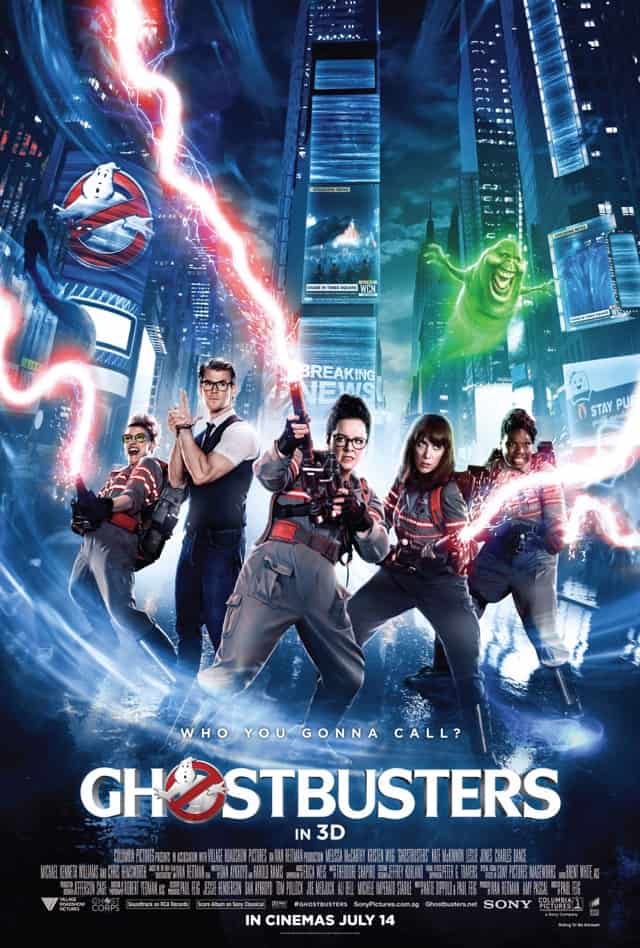 A new gang dons the jumpsuits and the proton packs in this reboot of the Ghostbusters franchise. Dr. Erin Gilbert (Wiig) is a particle physics professor at Columbia University who had a falling out with Abby Yates (McCarthy), a paranormal researcher who co-authored a book with Erin. Abby is now working with nuclear engineer Jillian Holtzmann (McKinnon), and an unexplained occurrence at New York’s historical Aldridge Mansion forces Erin and Abby to make amends. After witnessing a ghost on the train tracks, Metropolitan Transportation Authority worker Patty Tolan (Jones) volunteers to join the trio, rendering in-depth knowledge of New York’s history and geography. The dim-witted but handsome Kevin Beckman (Hemsworth) is hired as the crew’s receptionist, and they come to be known as the ‘Ghostbusters’. The team traces the recent spate of paranormal activity back to Rowan (Casey), an unhinged hotel bellhop bent on unleashing hell on earth. The Ghostbusters take on both malevolent spectres and repeated attempts to discredit them as the city is brought to its knees by the ghastly apparitions.

It’s impossible to talk about the Ghostbusters reboot without bringing up the spectre of negativity that has clung to it from the moment the idea was mooted. Across the internet, there were innumerable cries of childhoods being ruined, and dismay that the four members of the classic team had been replaced by women. Vitriol including death threats was spewed at all involved. The cast and filmmakers hit back, with McCarthy opining that all opposed to the Ghostbusters remake were man-children living in their mothers’ basements. It just kept getting uglier, on all sides. The original cast endorsed the reboot and several of them have cameos, but leaked emails revealed that Sony was threatening “aggressive litigation” against Bill Murray if he didn’t promote the film. Murray was famously reticent to appear in 1989’s Ghostbusters II and his refusal to co-operate with Dan Aykroyd was what put the nail in the coffin of a third film in the original series.

Sure, some of the arguments against the Ghostbusters reboot have merit, and this is yet another demonstration of how heavily Hollywood banks on recognisable, marketable franchises. It’s not so much that there are no new ideas, but that studio executives largely refuse to put faith in said ideas because they aren’t proven. There’s a lot to strip away, but when one gets down to it, this can’t help but feel like a storm in a teacup – or an ectoplasmic vortex in a ghost trap, if you will. Stop the presses: Ghostbusters ’16 is nowhere near as disastrous as its detractors have been hoping it would be.

Director Feig and his cast have a proven track record of bringing the funny, which they do in spades here. The style of humour is brash and in-your-face compared to the more sardonic jokes in the original Ghostbusters films, but a good amount of jokes land. Not all of them, to be sure, but enough of them. Abby, Erin, Jillian and Patty are not merely gender-swapped versions of Ray, Peter, Egon and Winston. An adequate balance has been struck between respectful tips of the hat to Ghostbusters movies past and comedic stylings that are unmistakably Feig’s, with Feig’s and co-writer Katie Dippold’s affection for the source material readily apparent. As such, it is a bit of an ironic shame that so many die-hard fans have long decided to boycott this reboot when more than a few morsels of fan-service are tossed their way. The cameos are generally pretty fun and had this reviewer wanting to see more, but they’re brief enough so as not to be wholly gratuitous.

This reviewer thinks McCarthy is funnier when she’s more understated, so it’s great to see her ably take on the position of team leader. This is a cast that absolutely clicks, and we never thought we’d say it, but their camaraderie does rival that of Murray, Aykroyd, Ramis and Hudson in places. Jones’ Patty is plenty loud and sassy and might come off as a racist stereotype, but her character actually feels more like she’s a part of the team than Hudson’s Winston Zeddemore did. And hey, a regular everywoman who’s not a scientist is a Ghostbuster; that’s absolutely fine. It is McKinnon who handily steals the show, getting some of the best lines as the team’s resident wacky wild card. McKinnon’s spot-on impressions of Ellen DeGeneres, Hillary Clinton and Justin Bieber amongst others on Saturday Night Live have garnered her considerable attention, but Ghostbusters just might be what rockets her up the comedy actor A-list, where she belongs.

Hemsworth is game and entertaining as the receptionist who’s practically too dumb to function, slightly reminiscent of Jason Statham’s sendup of his action hero persona in Feig’s previous film Spy. The characterisation does seem like it comes from some place of resentment though, seeing as Annie Potts’ memorable Janine from the original films wasn’t an airhead at all. The film’s villain is obviously not where the focus lies, but while Casey’s Rowan is creepy, he doesn’t cross over into being legitimately threatening and amounts to a regrettably forgettable foe. It’s also less than ideal that the film’s climax is pretty much a bog-standard big ole CGI-infused melee in Times Square, the likes of which we’ve seen many times before. It doesn’t hold a candle to the iconic Stay-Puft Marshmallow Man rampage of the first film, or even the Statue of Liberty marching through New York in the second.

Is the Ghostbusters reboot the best idea to come out of Hollywood? No. But thanks to the efforts of Feig and his talented, watchable cast, it succeeds where many reboots haven’t, as just enough of its own thing. Feig, Dippold and the other filmmakers have been given enough free rein such that this doesn’t come off as just a studio-mandated cash grab. There’s also no indication that there was any desire to supplant the original films or deny their legacy exists. Stick around for extra clips interspersed through the end credits, plus a post-credits stinger to cap it all off.

Summary: It’s not too hot to handle nor is it too cold to hold, but Ghostbusters is largely funny and well-made. Despite being stuck in the shadow of the towering original, it’s pretty enjoyable.