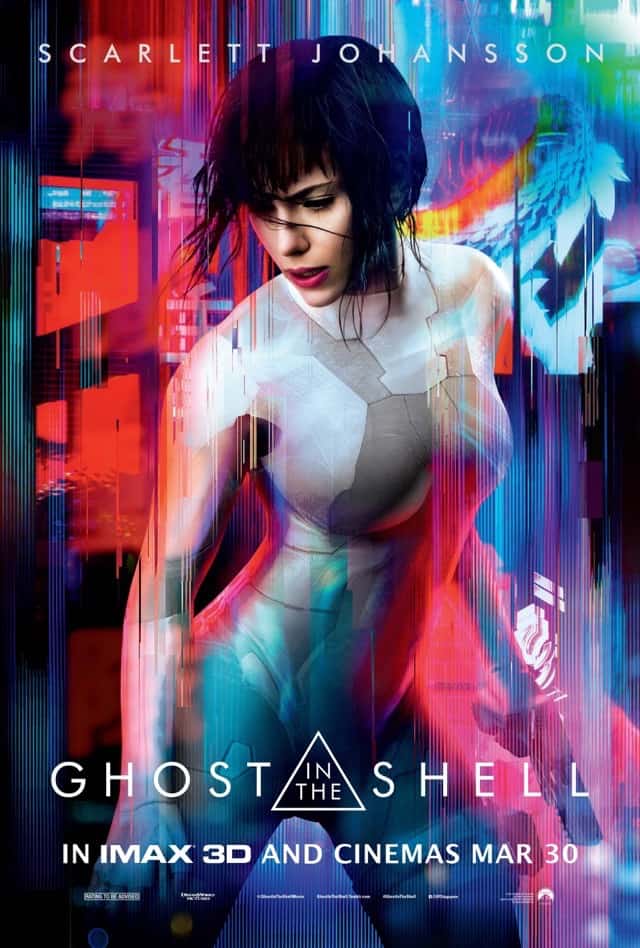 That’s the common reaction when the live-action Hollywood adaptation of Ghost in the Shell is mentioned. There’s a cybernetically-enhanced elephant in the room, (it’s got retractable metal tusks) but we’ll get to that later.

It is the future, and robot technology has become commonplace, many humans augmenting themselves with cybernetic implants. Hanka Robotics has gone a big step further, implanting a human mind into a fully synthetic robot body. The result is Major Mira Killian (Johansson), whose creation was overseen by Dr. Ouélet (Binoche). The Major works for the Section 9 task force, under the command of Chief Daisuke Aramaki (Kitano). Alongside her colleagues Batou (Asbæk) and Togusa (Chin Han), the Major must hunt down a shadowy villain named Kuze (Pitt), who has been remotely hacking Hanka’s products, making various robots turn on their owners. At the same time, the Major is haunted by visions of a burning pagoda, and seeks to piece together the mystery of her former, human existence.

The elephant is on its way – hear that synth-tinged trumpeting? First, some background: Ghost in the Shell is based on Masamune Shirow’s manga, first published in 1989. The manga was adapted into an anime film directed by Mamoru Oshii in 1995, and has since spawned other films, anime television series and video games. Ghost in the Shell rode the cyberpunk wave of the 90s, and has proven to be a deeply influential work. It was one of the main inspirations for The Matrix – the Wachowski siblings reportedly screened the 1995 film for producer Joel Silver, saying “we want to do that, but for real”.

One of the myriad issues with this adaptation is that it’s late to its own party. Filmgoers have seen similar futuristic cityscapes and high-tech prosthetics in other sci-fi films. It’s akin to how John Carter arrived around 100 years after its source material was written, with Star Wars and Avatar among others having become popular in the intervening years. There are plenty of eye-catching visuals in this take on Ghost in the Shell, but one gets the sense that director Rupert Sanders is dutifully duplicating the imagery from Oshii’s anime film, divorcing those images of their intended impact.

And now, the elephant. The protagonist was originally named Major Motoko Kusanagi, and the casting of Johansson led to widespread outrage, making ‘whitewashing’ a household phrase – even though it’s something Hollywood has done for years. Here is an action heroine in a big-budget movie, a role that could’ve and should’ve been played by an Asian actress, but a white actress was cast instead for box office appeal. Some make the argument that Motoko has no assigned race, as she is an android, and that ‘Motoko Kusanagi’ is a pseudonym. By this logic, an Asian actress still could have played the part. If this were a movie about Catherine the Great, Boudicca or Joan of Arc, retaining the original historical context, that wouldn’t have been possible.

“Maybe it’s much ado about nothing,” this reviewer told himself, taking his seat during the screening. “Maybe it’ll be so much fun I won’t notice. Maybe it’s a non-issue”. It’s not. It’s a non-non-issue. It’s an issue. Because so much emphasis is placed on the Major unearthing her past and coming to terms with the life she had before her brain was plopped into a robot shell, questions of identity fuel the plot. Like it or not, race is a part of one’s identity – not the sole part, mind you, but depending on the person, a key one. Without giving too much away, the big plot twist carries with it some ghastly implications where race is concerned.

To be fair to Johansson, her casting makes sense on some levels. She has considerable action heroine cred from playing Black Widow in the Marvel Cinematic Universe, has been in sci-fi films like The Island and Lucy, and played an artificial intelligence construct in Her. While Johansson handles the fights well and gets to show off her toned physique in a skin-tight bodysuit, the Major is mostly confused rather than confident. While some episodes of Stand Alone Complex have hinted at it, Motoko’s back-story in the original Ghost in the Shell is not a driving force of the plot. By making the rediscovery of her past the Major’s primary motivation, screenwriters Jamie Moss, William Wheeler and Ehren Kruger have reduced the character to ‘Jason Bourne as the Terminator’.

Noted Japanese actor-director “Beat” Takeshi Kitano makes what is only his second appearance in a Hollywood film, after 1995’s Johnny Mnemonic. All his dialogue is in Japanese, he gets to retain his dignity and has a few moments of badassery. Asbæk is not as physically imposing as most fans would expect Batou to be, but he’s fine. Pitt’s role is minimal, his character being something of a composite of Kuze from Stand Alone Complex 2nd Gig and the Puppet Master from the original manga run and the 1995 film. While there’s an attempt to make him sympathetic even as he carries out ruthless acts, we don’t get to know enough about the character to feel for him.

While not to the extent of 2014’s Godzilla, Ghost in the Shell is yet another Hollywood tentpole movie that wastes Binoche’s considerable talents as an actress. The character of Dr. Ouélet is comparable to Gary Oldman’s Dennett Norton in the RoboCop remake. A lot of this film reminded us of the RoboCop remake, only that was more fun. We also have Chin Han sporting a hairstyle that’s even more awkward than the one he had in Masters of the Sea. We did not know such a thing could be possible.

It may sound pretentious to scoff at a movie for “dumbing things down” for American audiences, but it’s hard to argue that this isn’t what Ghost in the Shell is doing. The source material’s heady themes of transcendence and the nature of consciousness are largely unmined, and the unfettered sexuality is neutered. Ah well, maybe there actually was an Asian actress in a co-lead role, but she was just cloaked in thermo-optic camouflage.

Summary: While it showcases familiar key visuals, Ghost in the Shell retrofits a Hollywood sci-fi action plot onto sophisticated source material. The negative buzz about casting a white actress as the protagonist is also fully warranted.