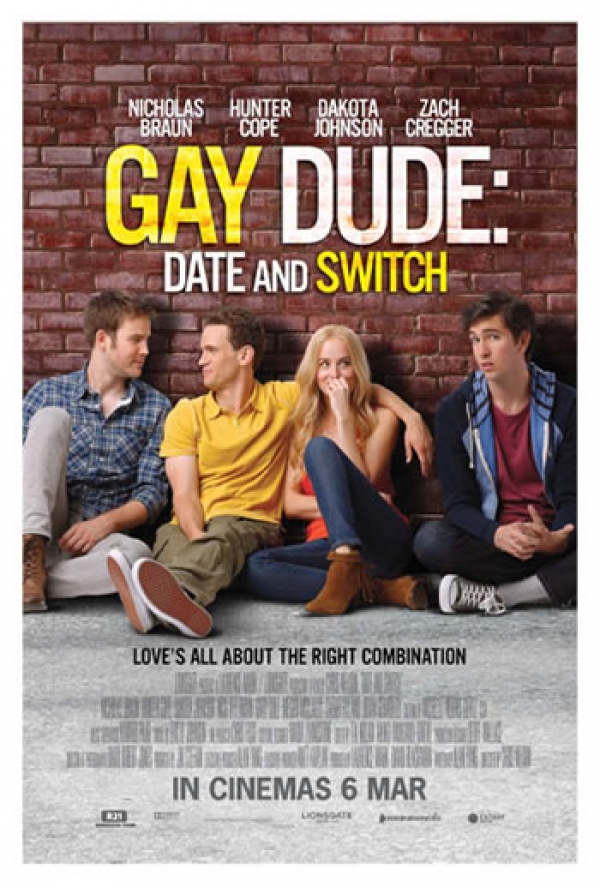 For a movie that emerges from the cesspool of incessant vacuity known as the high school/teen comedy genre, Date And Switch actually has its heart in the right place. It’s a movie with cute life lessons to share. Stuff like: be true to yourself, accept your friends for who they are, get laid before prom…

Unfortunately, those lessons get buried beneath lame jokes, cringe-worthy clichés, and a complete lack of onscreen chemistry between its two ostensible bros.

Michael (Braun) and Matty (Cope) have been best friends since early childhood, and now, on the cusp of adulthood, they have wisely set their sights on one shared quest: getting laid before prom. Things take a detour when Matty comes out of the closet, which puts a strain on their bromance. Cue pot brownies, getting to third base and virgin visits to gay bars.

If you’re looking for a sensitive, funny movie about coming-of-age journeys and the confusing emotions of sexual adolescence… well, you may want to give this particular teen comedy a miss. The only thing Date And Switch has going for it is its lack of homophobia; there are one or two heavy-handed gay diva stereotypes, but given the contextual mediocrity of the movie, it’s probably due to the ineptitude of the screenwriters rather than any deliberate decision to be crass.

In fact, the only really offensive thing about Date And Switch is how boring it is. The characters range from the annoyingly obnoxious to the generic, while the jokes mostly centre around the premise of how awkward it must be to like, y’know, have a gay BFF. Ultimately, the film takes on a vibe of forced quirkiness, and never steps beyond genre conventions.

On a conceptual level, we applaud Date And Switch for being a coming-of-age movie centred around the troubles of a gay teenager. It’s a fresh take on a tired genre, and lord knows that we need more of the acceptance espoused by the movie around these parts. On the level of execution, though, Date And Switch is about as generic and forgettable as they come.

Summary: Its heart is in the right place. Wish we could say the same about its humour.