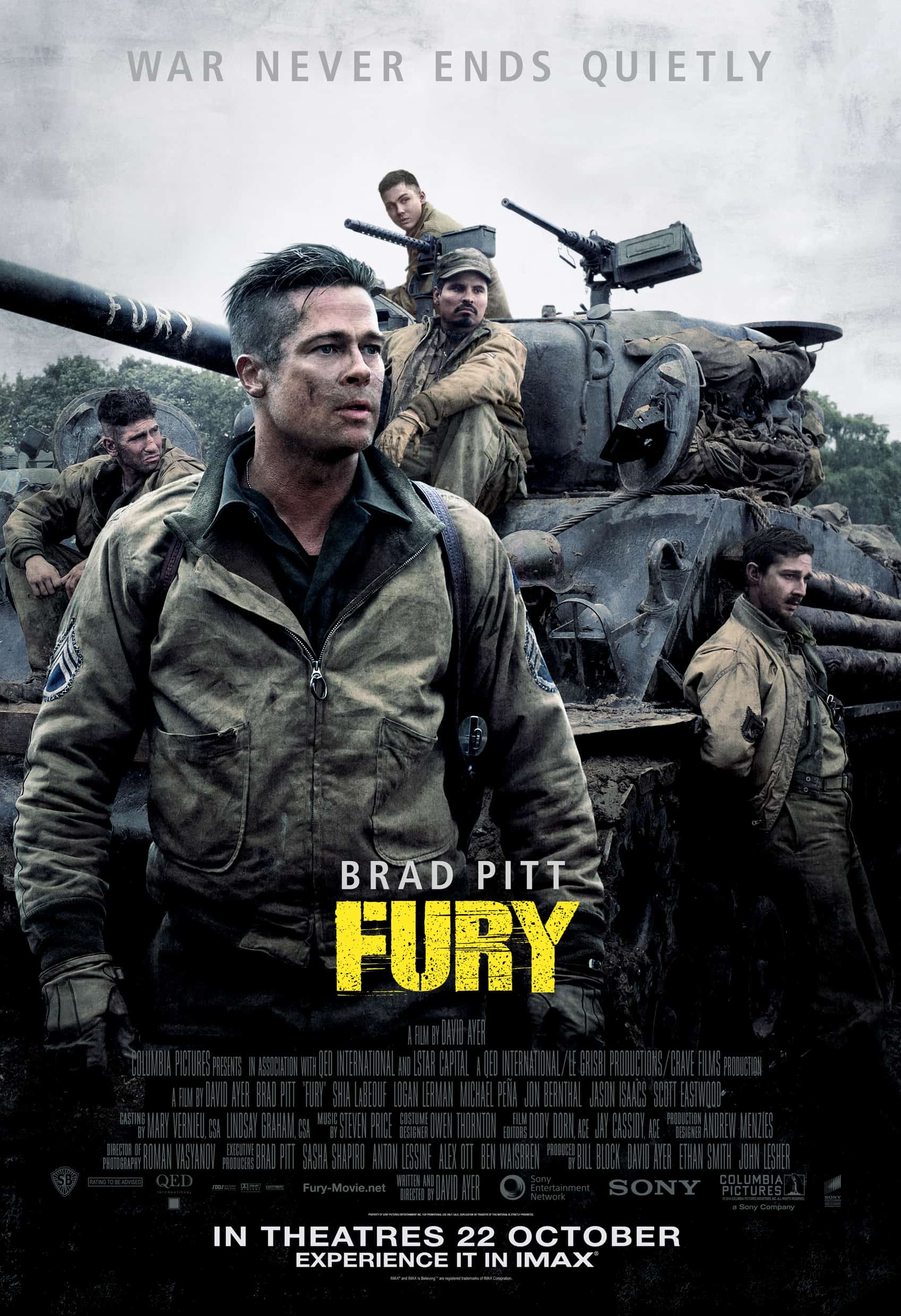 The 2nd Armoured Division was hell on wheels to any Nazis who found themselves in their path. This film, set in April 1945 as the Second World War draws to a close, tells of the fictional five-man crew of a M4A3 Sherman tank christened “Fury”. US Army Staff Sgt. Don “Wardaddy” Collier (Pitt) leads the crew, consisting of Boyd “Bible” Swan (LaBeouf), Grady “Coon-Ass” Travis (Bernthal), Trini “Gordo” Garcia (Peña) and rookie Norman “Cobb” Ellison (Lerman). A typist clerk who’s never been on the battlefield, Norman struggles to confront the horrors of war head-on as he repeatedly clashes with the men who occupy the Fury with him. Facing off against the better-equipped Nazis, the crew of the Fury must make a heroic last stand behind enemy lines. 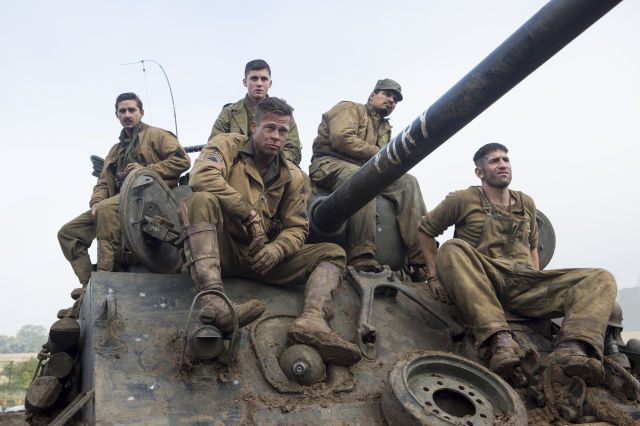 Writer-director David Ayer’s films have not been particularly pleasant, from gritty cop thrillers like Street Kings and End Of Watch to the nasty Schwarzenegger-starring Sabotage earlier this year. War is never pleasant and Ayer brings a good deal of nastiness to the proceedings. Fury’s depiction of World War II is unflinching in its violence and brutality, containing many shocking moments of heads – belonging to soldiers and civilians alike – being blasted open. On the one hand, this graphic approach adds to the film’s believability and makes it clear to the audience that Ayer is not interested in presenting a sanitised, romanticised view of this period of history. On the other, it often feels exploitative, that Ayer is revelling in this carnage and that the “war is hell” message is secondary to bullet hits and blood splatter.

“Ideals are peaceful. History is violent,” Pitt’s Wardaddy says pithily. Ayer has achieved a grimy, bloody realism befitting the historical but, at the same time, it can’t help but feel like a wholly cynical affair. In this day and age, Americans and others around the world have grown jaded with and tired of war. Ayer’s take on the Second World War is bereft of nostalgia or sentimentality, but this works against it. Some audiences might squirm at the film’s depiction of “the greatest generation” taking sadistic glee in slaughtering German troops; others might just cheer along. There are attempts in Fury to tackle ethical quandaries and questions of faith but these moments are presented with far less conviction than those involving flying body parts. 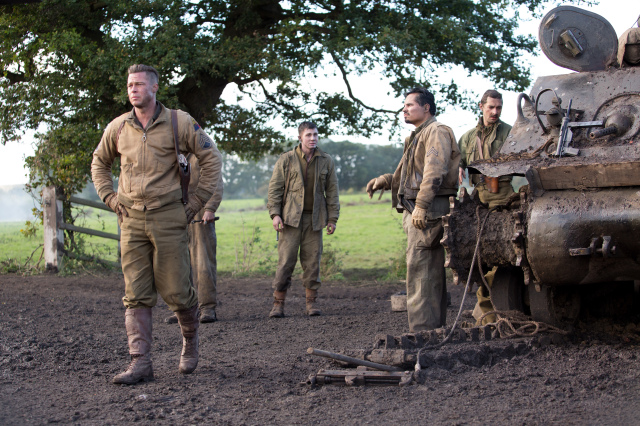 Even though the soldiers manning the Fury are far from likeable, the performances are solid, with Pitt leading the charge. Wardaddy, as his nickname suggests, is a father to his men, but he also has a cruel streak and isn’t about to mollycoddle anyone. Pitt is sufficiently believable, apart from his constantly perfectly-coiffed hairdo. Bernthal’s Grady is the resident jerk of the crew and he does get on the nerves, though that’s how the part was written. LaBeouf is surprisingly less annoying than this reviewer expected and his scripture-quoting Boyd “Bible” Swan, dedicated to his faith while raking up the body count, is not quite the caricature he should’ve been. Lerman, sometimes characterised as a handsome but boring young actor, is the standout of the cast for this reviewer. Yes, Norman is the audience surrogate character, the fresh-faced new kid yet to be tainted by the horrors of war – we’ve all seen that one before. However, Lerman’s conviction in the part, combined with how out-of-place he looks in that environment, gives the film its few moments of genuine heartrending emotion amidst the barrage of gunfire and exploding grenades. 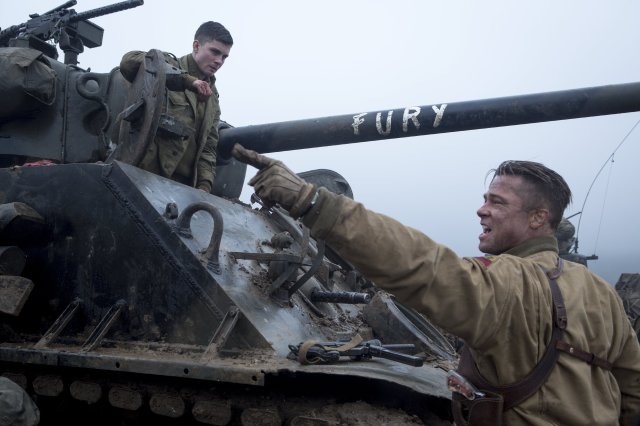 Perhaps we’re wrong – perhaps we should be glad that a World War II film pulls no punches and isn’t naïvely jingoistic. But is it too much to ask for a film of this genre to highlight nobility and honour, bring a little of the best of humanity to the forefront, feel respectful? There have been several masterfully-made war films which are violent and bloody but also showcase the dignity and heroism of their subjects – Saving Private Ryan comes to mind. Unfortunately, Ayer seems to have too much fun blowing bodies to bits to present a sombre, well thought-out historical portrait.