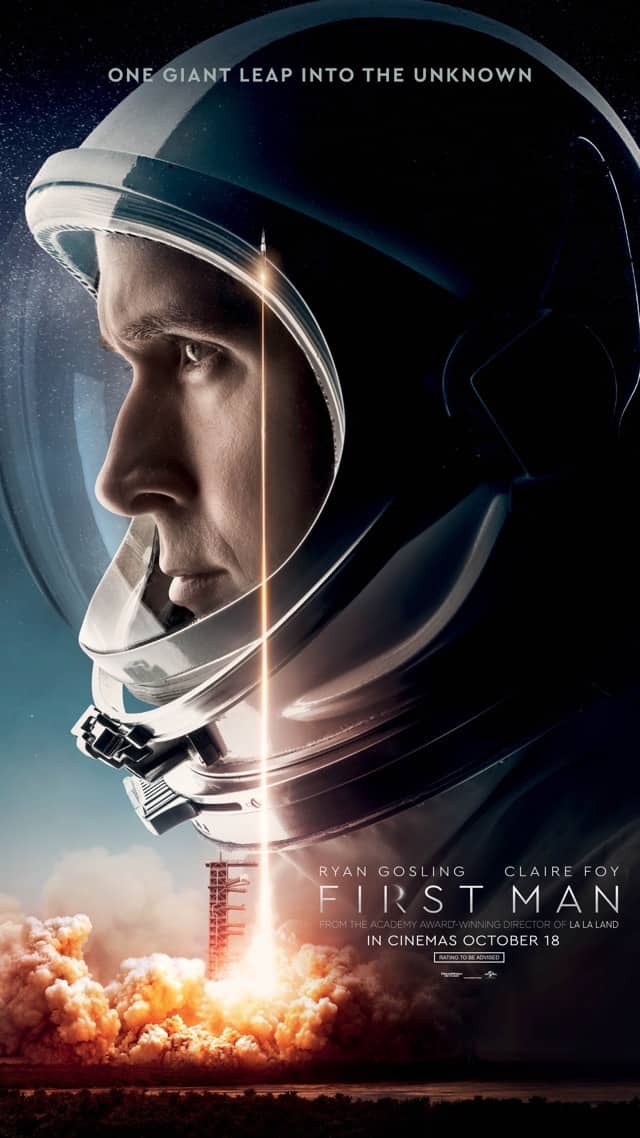 There’s no denying that Damien Chazelle is one of the most interesting directors working today. His two most recent credits, which he wrote and directed, were breakout hits. You could practically sense Chazelle himself living and breathing in every frame of Whiplash and La La Land – two films that were, on the surface, quite different, but which married complex character work with intense musicality to quite remarkable effect. With First Man, he turns his hand to the prestige biopic: a rich historical drama inspired by the life and achievements of legendary astronaut Neil Armstrong. The final result is a strange beast: it mostly works well when shooting (quite literally) for the moon, but falls short at getting to the heart of its subject.

We first meet Armstrong (Ryan Gosling) in 1962. Already a renowned test pilot, he and his wife, Janet (Claire Foy) have created a picture-perfect nuclear family, with one son, Eric, and one daughter, Karen. But tragedy strikes: he’s forced to watch, helpless, as his beloved little girl wastes away from an inoperable brain tumour. Although her premature death shakes Armstrong to the core, you would never know it: he returns to work almost immediately, and signs up for America’s space programme. Instead of dealing with the oceans of grief within him, he channels his intense stoicism and iron discipline into his new mission: taking leave of the surface of the Earth.

On this count, the film is a marvel – both in technical terms, and as a resurrection of a relatively distant past. The 1969 moon landing has passed into legend and lore: it’s a fact we learn from history books, its accompanying dangers and follies fading with the passage of time. First Man brings all of that context back to vivid, shuddering, blood-and-guts life, reminding us that we somehow catapulted a man to the moon without any of the computing technology that most of us carry around in our pockets nowadays.

This point is driven home as Armstrong and his compatriots – including Ed White (Jason Clarke) and Buzz Aldrin (Corey Stoll) – take turns being shot into space. Through close-ups tighter than Tom Hooper’s and deliberately shaky camera-work, Chazelle invites us to join these men inside their spacecrafts: glorified tin buckets, held together by a dream and a prayer, that might as easily serve as their coffins as their shuttle to the stars. The human cost of the entire space-faring effort weighs heavily on the film and its title character, forcing Armstrong to grapple with loss every time a mission fails – occasionally, before it even begins.

All the emotional beats that land (and there are quite a few that don’t) come courtesy of Chazelle’s first-rate cast. Gosling has made a career out of playing grimly determined men, whose hearts are beating wildly beneath veneers of impenetrable impassivity. He’s very good as Armstrong, though he’s hamstrung by the very role he’s playing. Foy makes the most of a rather underwritten part, unearthing genuine rage and heartbreak as Janet’s life revolves around the constant possibility of her husband’s death.

Less successful are First Man’s attempts to give us a sense of who Neil Armstrong was. It admirably avoids transforming him into a cliché or a lie: this is no charmingly airbrushed portrait of a genial aw-shucks American hero.

What the film does do, unfortunately, is swing almost too far towards the opposite extreme. At every turn, Armstrong refuses human connection: rebuffing his wife, his friends, his living children, while stewing in his own angst. Josh Singer, who consulted with Armstrong’s first wife and sons in writing the screenplay, stands by the version of the man we meet in the film: so pathologically reticent that he would rather risk his life travelling to the moon than spend one evening talking honestly with his family.

But therein lies the problem. Sure, Armstrong could have been hard and cold and emotionally inaccessible (at least at the time) to those closest to him. It still takes a conscious narrative decision, however, to make one particular interpretation of the man’s inner turmoil the emotional pivot of the entire film. When this Armstrong stares at the moon (which he does a lot), the film practically yells at us that he longs to escape there. Making history is incidental; it’s all about processing his grief. 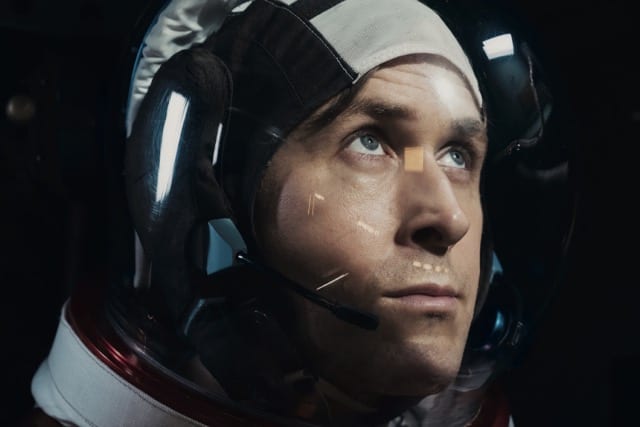 It’s also why the film’s climax – a scene that should be filled with awe and wonder at the superhuman feat achieved by distinctly unsuper humans – undercuts itself. We barely get to experience the joy that should accompany this remarkable achievement, because Armstrong’s face remains obscured by a reflective visor as he takes his first steps on the moon. We only get to see his face at a moment so nakedly sentimental that it will have you rushing online afterwards to find out how much of it is fact and how much fiction. (Spoiler alert: it’s fiction, which Singer will argue is grounded in fact. But it’s still fiction.)

In effect, First Man ends up trapping itself by its own ambition. It wants desperately to avoid painting Armstrong as a noble, flaw-free hero – but focuses so much on his personal misery that his accomplishments are devalued. The historic moon landing becomes part of the weight of one man’s sorrow, bleeding it of the enormous scientific and cultural significance that Armstrong himself would have fiercely defended. If Armstrong wasn’t a real person, it might have worked. But because he was, First Man’s awkward blend of documentary and melodrama – as relentless as it is reductive – feels tone-deaf. It aims for the stars… but winds up crashing to the ground.

Summary: Shoots for the moon, and misses the heart.