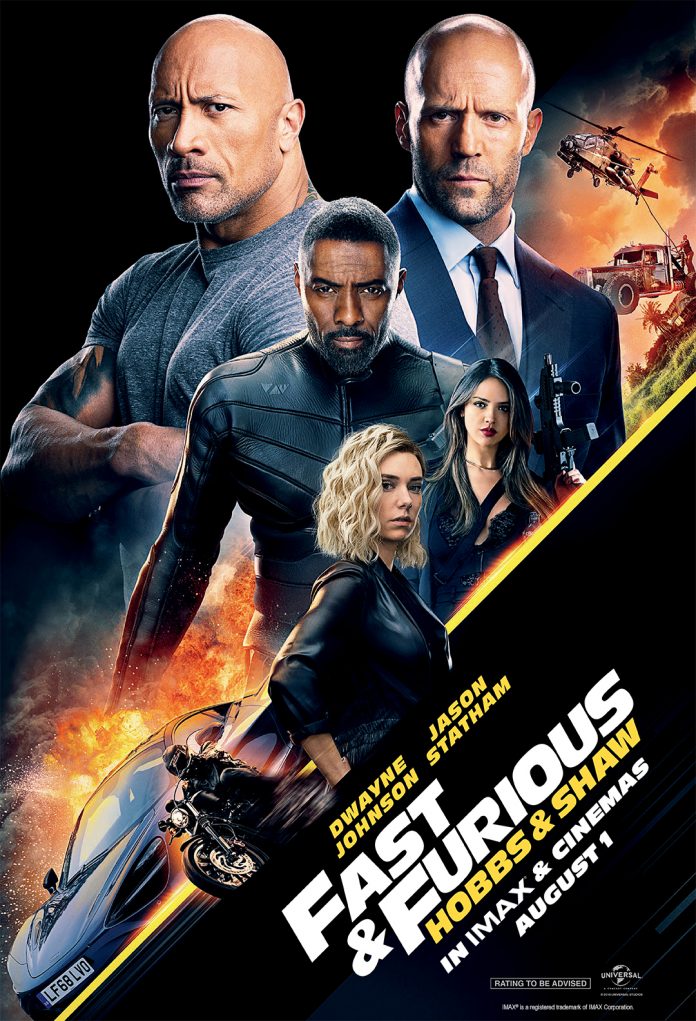 The Low-Down: Sometimes, you build a cinematic universe by design (hopefully). Other times, you build it almost by accident. When The Fast And The Furious was released way back in 2001, no one could have foreseen it spawning a box-office-busting franchise that has since raked in more than $5 billion over eight films. Deciding to create this spin-off focusing on two of the franchise’s newest and most charismatic additions – the titular Hobbs and Shaw – must have been a no-brainer. Unfortunately, this film feels like a literal no-brainer too, its weak, cluttered script mostly failing to support its inexplicably talented cast.

The Story: If you’ve never watched a single Fast & Furious film (like this reviewer), you won’t be too lost. It’s fairly easy to pick up the threads of the spiky rivalry between American federal agent Luke Hobbs (Dwayne Johnson) and British assassin-with-a-past Deckard Shaw (Jason Statham). Their mutual loathing takes a back-seat when both men end up on the same mission: chasing down a potentially world-destroying super-virus embedded in Deckard’s sister, MI6 agent Hattie Shaw (Vanessa Kirby). Hot on their heels is the cybernetically enhanced Brixton Lore (Idris Elba), who’s hellbent on securing the super-virus for his sinister employers.

The Good: When deployed effectively, Johnson and Statham are marvels of charisma and comic timing – well able to steal scenes, if not entire films, with snappy, snarky ease. On occasion, their electric charm and chemistry flare to life during Hobbs & Shaw, but it doesn’t happen often enough to save the film from its weak script and haphazard editing. That said, there’s some joy to be had in watching Hobbs & Shaw’s outrageously good supporting cast, which includes top-notch character actors like Helen Mirren and Eddie Marsan. Elba, for his part, acquits himself fairly well as a rampaging cyborg with a broken soul hidden somewhere beneath his menace and machinery.

The Not-So-Good: Unfortunately, the film never really lives up to the potential of its cast. The screenplay by Chris Morgan and Drew Pearce is frustratingly flabby. It’s the kind of script in which a strong female character is only as strong as the film needs her to be – Kirby tries her best, but is given next to nothing to flesh out the role of Hattie. Hobbs & Shaw also fails to help its titular double act move from the sidelines into the spotlight. Their incredibly juvenile playground bickering and bantering becomes wearisome after a while, making it harder to buy into the film’s attempts to delve into their histories and families. In grand Fast & Furious tradition, the action sequences are big and bonkers, bouncing from London to Moscow and even Samoa – but, shorn of effective character development, they also feel empty and soulless, strung together to pad out a running time that’s already far too long.

Lock It Down: If you’re familiar with Leitch’s recent filmography, you won’t be surprised by an extended cameo in Hobbs & Shaw that proves to be one of the film’s highlights. It’s the kind of blithely cheeky stuff that Leitch has proven he can pull off well – he juggled heart and humour to great effect in Deadpool 2. But Hobbs & Shaw never quite knows what it wants to be – silly or earnest, dumb or dark – and winds up being neither and nothing.

Recommended? Only if you’re a Fast & Furious devotee, or a diehard fan of Johnson and/or Statham. Otherwise, Hobbs & Shaw is a muddled mess that will sorely test your patience and tolerance for poorly-written, testosterone-fuelled shenanigans.