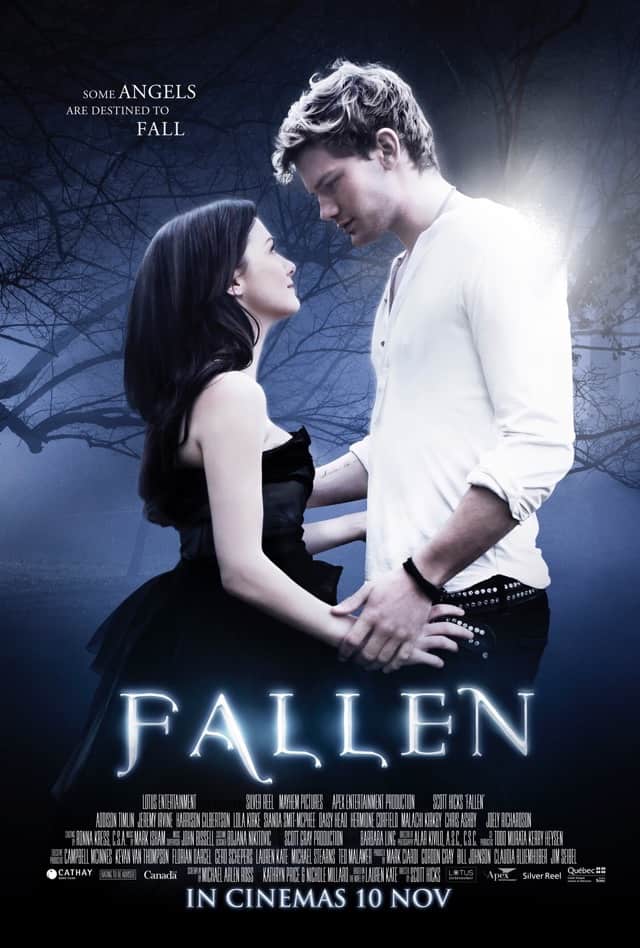 Before sexy vampires were as a big a thing as they became, sexy angels were all the rage. The likes of City of Angels, Meet Joe Black and A Life Less Ordinary played into the fascination with someone who could quite literally sweep a girl off her feet. Sexy angels haven’t completely flown away – look at Supernatural’s Castiel. And of course, there are romantic fantasy novels in which the protagonists have the hots for the heavenly host. The Young Adult book Fallen, by Lauren Kate, is one such novel.

Lucinda ‘Luce’ Price (Timlin) is enrolled in the Sword and Cross academy, a boarding school for troubled teenagers. Luce has been seeing disturbing, unexplainable visions, and is trying to escape a traumatic event in her recent past. While she’s treated with hostility by schoolmate Molly (Smit-McPhee), Luce befriends Pennyweather ‘Penn’ Van-Syckle Lockwood (Kirke). Two of the boys in the school immediately catch Luce’s attention: there’s Daniel Grigori (Irvine), who keeps to himself and seems oddly familiar; and there’s Cameron ‘Cam’ Briel (Gilbertson), the rebel without a cause. Sophia Bliss (Richardson), one of the teachers at Sword and Cross, seems to know more than she’s letting on. It’s not long before Luce discovers she’s entangled in an eons-old struggle between three otherworldly factions: the angels who sided with God, those who followed Lucifer into hell, and the undecided angels cursed to walk the earth, dubbed ‘the Fallen’.

When it’s not being quite dull, Fallen is delightfully hilarious. This is a film that is one clever editing job and a character who makes metafictional jokes away from being a full-tilt parody of YA fantasy romance. It’s quite baffling that director Scott Hicks didn’t realise how unintentionally funny this all is – or maybe he did, and is hoping the teenage girl demographic just won’t notice. The love triangle in a prep school setting is cheesy enough, but on top of that, we have pseudo-theological gobbledygook slathered on thick. Not only does the film begin with a voiceover prologue explaining the three factions of angels, there’s an expository lecture that covers the same ground.

The production values aren’t too shabby, with the 19th Century Schossberger Castle in Tura, Hungary playing the part of the Sword and Cross academy. Hungary provides not only the tax breaks, but also the old-world European sensibilities that make Fallen seem grander than it has any right to be. Alar Kivilo’s cinematography is often quite beautiful, though Fallen is guilty of believing that ‘blurry equals romantic’. Angels must have wings, and the CGI used to create said appendages is quite terrible. While the design team is obviously aiming for a different aesthetic than the traditional tactile, birdlike feathers, it just ends up looking like the production didn’t have the budget for proper wings.

The acting in Fallen isn’t terrible, it’s just that the movie seems to be littered with clearly labelled boxes, with each character climbing into their allotted box and just never leaving it. The archetypes and the purpose they serve in the plot are so obvious that the turning gears of the narrative are made very noticeable. We have our chosen one protagonist who has a dark and troubled past ™, the slightly boring handsome guy, the dangerous bad boy, the garrulous, chipper geeky best friend, the edgy girl with the torn nylon stockings and dyed bob, and the shifty authority figure who’s hiding something. All present and accounted for. And yes, all the actors playing high school-aged kids look a smidgen too old, but that’s something we’re already used to.

We’ve gone this far without making this comparison, so here goes: Fallen is sub-Twilight, which is saying something. Luce is pretty much Bella Swan, but Timlin is considerably less annoying than Kristen Stewart was in the Twilight films. We’ve got two guys fighting over who’s better suited to protect the girl and stalker-ish tendencies from all three parties. Kirke is pretty tolerable as the designated muggle, and while most YA movies have at least three somewhat respectable actors as the adult supporting characters, we have to make do with one – Joely Richardson. One can’t help but think of Richardson’s role in Vampire Academy, which for its tonal issues, had its tongue planted firmly in cheek.

By the time the Hawkman and Hawkgirl-style millennia-spanning romance is laid out in full, it’s clear that Fallen’s reach exceeds its grasp, in the most laughable way possible. The on-the-nose symbolism – why yes, ‘Luce’ is derived from ‘Lucifer’ – is the cherry on top. This is deeply silly stuff that’s clearly well past its sell-by date. An adaptation of Torment (yes, it’s actually called that), the second book in the series, is apparently in development, which seems awfully optimistic.

Summary: If you roll your eyes when you hear the term ‘YA paranormal romance’, this is the very thing you’re thinking of.