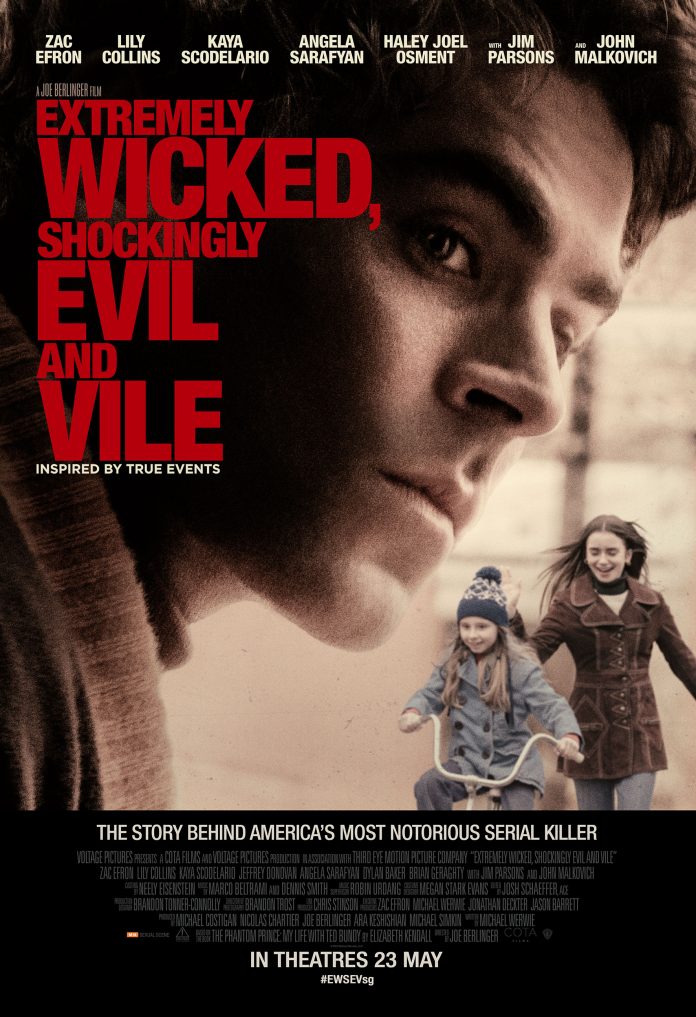 The Low-Down: Adapted from Liz Kloepfer’s memoir detailing her relationship with Theodore Robert Bundy (aka Ted Bundy), Extremely Wicked, Absolutely Evil, And Vile tells the story of how Liz (Lily Collins) struggled with the truth about the man she once loved and trusted so deeply. For those not familiar with Ted Bundy (Zac Efron), he’s the twisted serial killer of dozens of young women in the 1970s and defended himself in court during his last trials on live national TV. If Ted sounds like some celebrity murderer, he certainly is and that’s how the movie challenges our obsession with infamous serial killers like Ted.

The Story: Single mother Liz hits up with a handsome stranger in a bar by the name of Ted, who doesn’t run away despite knowing she has Molly, a toddler from a previous marriage. He even cooked breakfast and took care of Molly while Liz slept through. However, when Ted is arrested in Utah because of his striking resemblance with a wanted kidnapper, multiple murders of young women in various states are suddenly linked to him. As the truth becomes clearer by the days, Liz struggles with accepting the man she loves for what he really is, even denying inadmissible evidence and her own doubts. It’s a story of how love can blind someone, even if it means living with a serial killer for years.

The Good: As with most decent movies based on true events, Extremely Wicked gets the documented moments of Ted’s apprehension right. In particular, Efron, John Malkovich, and Jim Parsons (Big Bang Theory, Hidden Figures) execute the reenactment of the key court scenes during the live telecast of Ted’s trial with flair. And the first of its kind among all the other content out there more interested in the gruesome details of the killer, Extremely Wicked is more about the mental prison Liz is trapped in because of her love for him — giving a voice to the most misunderstood person closest to Ted.

The Not-So-Good: For people unfamiliar with Ted, Extremely Wicked makes you actually feel sorry for the ruthless murderer. Except for a few scenes where it’s implied that there’s indeed something sinister within the handsome criminal, the movie doesn’t paint a clear enough picture of Ted’s evildoings. Also, the movie doesn’t do justice to both Liz and Collins — it’s supposedly her story but it feels like she’s just in the background while Ted gets all the spotlight. It would have been more effective if we’re shown more scenes of Liz and the people who supported or ostracized her during the darkest periods.

Knock-Out Sequences: Zac Efron (High School Musical, The Greatest Showman) completely sells the Ted portrayal — from the blank, cold eyes to the charismatic but sinister smiles and smirks, he’s almost everything you can ask for in a recreation of Ted. Lily Collins (Okja, Love, Rosie) is slightly underused here as the heartbroken Liz because of the surprisingly limited screentime she gets. She nails the emotional scenes and where they matter, nonetheless. John Malkovich (Mile 22) deserves compliments for his role too, particularly for convincingly delivering the famous lines by Judge Edward.

Watch Out For: The final confrontation between Ted and Liz in the prison visiting room. It’s a shocking but cathartic moment for Liz and viewers who have gone through the entire legal trial, believing Ted is more than a cold-blooded serial killer.

Recommended? Yes. Extremely Wicked’s visceral core topped with stellar performances are what gives it the appeal.

P/S: If you’re interested in knowing more about the truth behind Ted’s killings and what makes him tick, Netflix‘s docuseries Conversations With A Killer: The Ted Bundy Tapes reveals the story and his motivations through a journalist’s tape recordings.