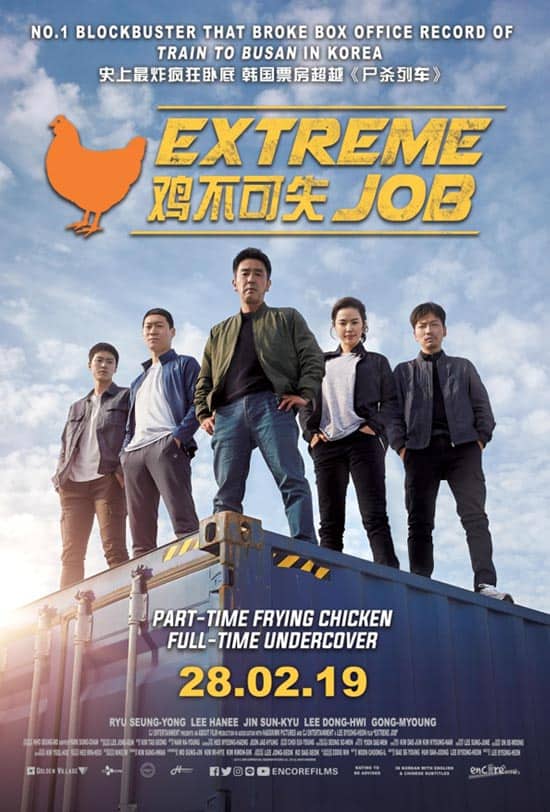 The Story: When Seoul narc team fails another mission under Captain Go’s (Ryoo) lead, the team faces potential disbandment. Following a cold lead in a last-ditch attempt, Go and his team stakes out at a fried chicken joint — directly opposite the supposed hideout of meth drug leader Moobae (Shin Ha-gyoon). They eventually buy over the restaurant in hopes of delivering fried chicken to their den and arrest them by surprise. Unexpectedly, their franchise-worthy KFC (Korean fried chicken) becomes popular and attract crowds beyond their imagination. Now, the team struggles between fulfilling orders and working on catching Moobae.

The Good: The pillar of Extreme Job is the performances of almost every character that has a line. From the robust leading cast down to the unnamed cops and thugs, everyone gives their best whenever they’re given a shot to make the audience laugh. Director Lee and crew are pretty adept in pacing the movie in general, making the 111-min runtime bearable and entertaining. Above all, the witty and humorous dialogue (by Bae Se-yeong; Intimate Strangers 완벽한 타인) and tight cinematography deserve the most praise.

The Not-So-Good: Unsurprisingly, Extreme Job is a forgettable comedy with the only goal of making you laugh during its runtime. The plot doesn’t go anywhere with fairly bare-boned lead characters and an overused premise. Also, the plot gets muddled too much towards the middle and third acts, making a couple of the running jokes a little tiresome to watch.

Knock-Out Performances: Ryoo is the clear standout star in Extreme Job, particularly for displaying a totally new side to his usually sombre roles. You can tell he’s having the time of his life in practically every scene, showing full control over how he portrays the clumsy Captain Go. Jin and Lee Ha-nui are brilliant too as perpetually-bickering comrades, always delivering punchy lines and ridiculous actions without trying too hard. Lee Dong-hwi is under-utilized but makes the best of what he can.

Watch Out For: The hilarious but action-packed clash of the narcs and druggies towards the end. The action sequences could be sloppily done and still be funny but the crew and cast didn’t compromise on the action and camera work.

Recommended? Yes, if you’re looking for a worthwhile comedy that packs quite a punch. It’s no Game Night or Kingsman, but Extreme Job succeeds at what other subpar comedies fail — genuinely hilarious gags for the masses. In some sense, Extreme Job is what happens when you apply the Korean gag concert idea to an episode or two of Netflix’s Ozark.