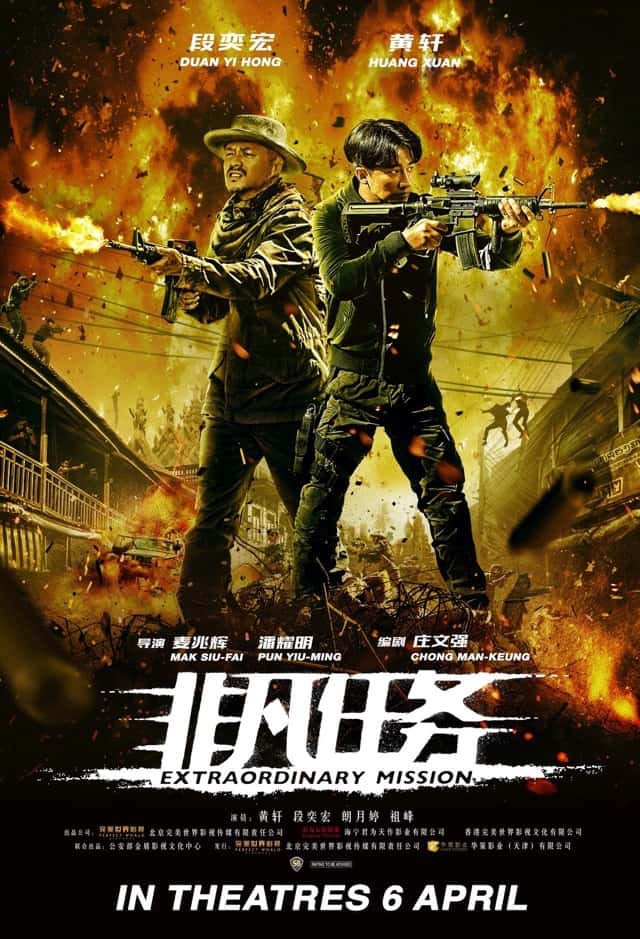 In this action thriller, undercover cop Lin Kai’s (Huang) mission, should he choose to accept it, is to infiltrate a drug cartel. He accepts. Lin Kai works his way up the ladder, making supply runs for the syndicate in China. He reports his findings about the syndicate’s contacts and organisational structure to his supervisor, Captain Li Jianguo (Xing). To gain the trust of Eagle (Duan), the boss of the Twin Eagles cartel, Lin Kai is taken to the cartel’s base of operations in the heart of the Golden Triangle, where he is forcibly made an addict to prove his loyalty. Lin Kai attempts to sway Eagle’s daughter and right-hand woman Qingshui (Lang) to the side of good, as the mission unearths ghosts from Jianguo’s past as a field agent.

Extraordinary Mission is directed by Alan Mak and Anthony Pun and is written by Felix Chong. Pun is also the film’s cinematographer. The team has been involved in the Infernal Affairs and Overhead series, having garnered considerable cred in the crime thriller genre in Hong Kong. The title ‘Extraordinary Mission’ recalls the 80s action flicks in which Chuck Norris helicopters in to a jungle to take out some dictator’s private army. It takes a while for Extraordinary Mission to get into gear, and for its first two acts, it’s mostly a twisty game of mental cat-and-mouse between our brave undercover cop hero and the devious criminal mastermind. Then during its final 20 minutes, Extraordinary Mission lets loose with an elaborate, protracted action sequence that goes from the rooftops to the streets. Our heroes are outnumbered by Eagle’s mercenaries, and there are joyously ridiculous motorcycle stunts to behold.

Extraordinary Mission suffers from a bit of an identity crisis, because things are played straight and circumstances are supposed to be grave – but everything leads up to a gleefully explosive finale which is self-indulgent in every regard. Entertaining, sure, but still self-indulgent. Action choreographer Nicky Li, whose credits also include Wolf Warrior and Invisible Target, stages intense shootouts, crunchy vehicular collisions and a large assortment of explosions. The production values benefit from location filming in Thailand, and the sprawling Twin Eagles compound sells the power and reach of the illicit operation. We see large factory floor where scores of workers are mixing and packing the heroin, then Eagle shows Lin Kai a vertical greenhouse in which multiple storeys of poppy plants are being cultivated via hydroponics. It does lend this a sense of scale.

For all its action spectacle, the story beats in Extraordinary Mission are familiar. There are several twists and reveals, as is a trademark of Mak and Pun’s filmography, but the filmmakers seem to think these are cleverer than they really are. Several scenes, accompanied by a mournfully cooing female vocalist and an acoustic guitar, are too melodramatic. Tiny things like gunshot wounds or drug addictions only affect the characters when it’s convenient for it to affect them. There are also scenes in which characters yell at the top of their lungs to convey intensity, which can get unintentionally silly.

Huang Xuan makes for a decent tortured hero and handles the action beats ably. Like many films of its ilk, Extraordinary Mission suffers from having its hero be a lot less compelling than its villain. Lin Kai gets a bog-standard tragic back-story, and while Eagle’s back-story is similarly predictable, Duan Yihong is more fun to watch than leading man Huang. Duan hits the right pitch of devilish charisma and unrepentant sadism, while still being convincing as a savvy businessman who could run such a massive outfit.

While the subplot of Lin Kai attempting to turn Eagle’s daughter against him is intriguing, it isn’t given enough development. That said, Lang Yueting gets to play a more complex role than the typical action movie interest. Xing Jiadong has sufficient presence as the police Captain who must confront a botched mission from a decade ago, a character that could’ve easily been quite boring.

Extraordinary Mission’s 121-minute runtime is slightly too long and it does spend a lot of time setting up straightforward back-stories, but action aficionados will be rewarded for their patience with a rip-roaring ending battle for which directors Mak and Pun pull out all the stops.

Summary: While its plot beats are largely predictable, Extraordinary Mission’s solid production values and spectacular finale make it worth a look for fans of Hong Kong action cinema.