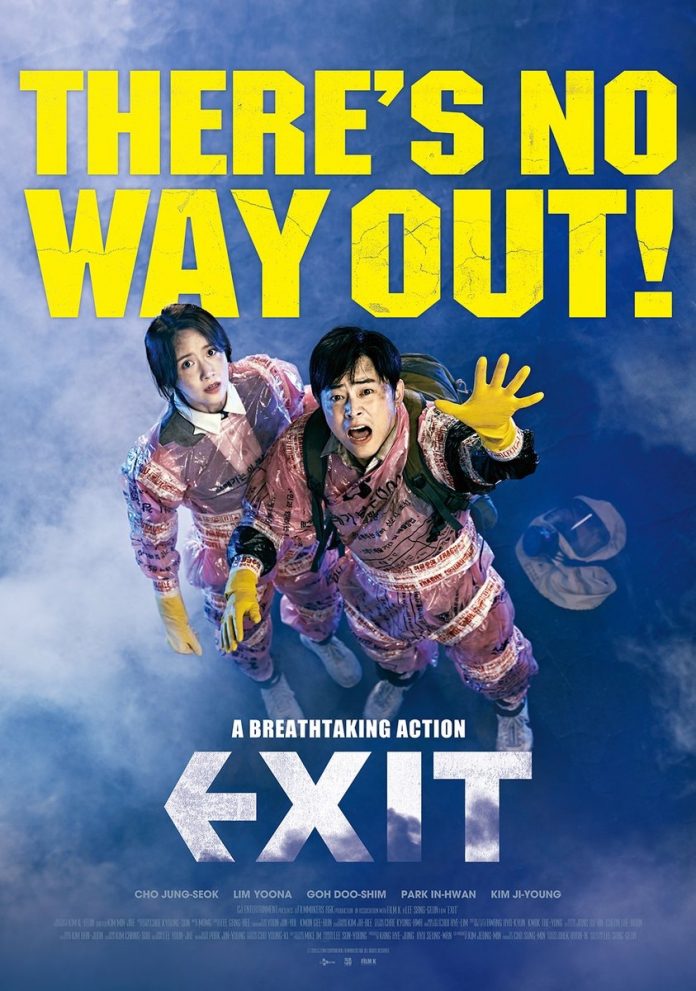 The Low-Down: Exit is what happens when a first-time feature film director Lee Sang-geun and his crew decide to add a Korean gag-show twist to a disaster movie. Surprisingly, the combination goes pretty well as K-Pop girl group legend Girls’ Generation (SNSD) Im Yoon-ah (or simply Yoona) and veteran actor Jo Jeong-seok (Intimate Strangers (완벽한 타인), The Drug King (마약왕)) strike quite decent chemistry. Beneath the hilarious gags and palm-sweating thrills, Exit’s core is about the struggles of the middle and working class in South Korea, and boy, do the message hit home hard.

The Story: Aimless, jobless, and clueless in his mid-thirties, Yong-nam (Jo) holds onto his college obsession with rock climbing and crush (who friend-zoned him), Eui-joo (Yoona). For his mother’s birthday, Yong-nam decides to hold it at a restaurant where Eui-joo is an assistant manager. When a toxic gas terror attack hits the city killing thousands of innocents, Yong-nam’s climbing adeptness comes in handy as he makes a ridiculously ardous climb just to unlock the rooftop door for his family. But it doesn’t stop there — because of insufficient space in the rescue helicopter, Yong-nam and Eui-joo have to jump across buildings, climb up signboards, and even cranes as the toxic gas spreads upwards to get to higher ground to hopefully, get rescued.

The Good: To say Yong-nam and Eui-joo is an absolute joy to watch, laugh, and root for is an understatement. The duo pulls off almost every scene together — Jo’s performance is almost flawless while Yoona does what she does best, charm viewers and fans with her innocent smile and adorable flustered expressions. Cinematography, editing, and visual effects pull Exit together, bolstering the tense and gripping climbing scenes. It can get a little uncomfortable and even unnerving to watch them climb up tall buildings, especially for the acrophobic and weak-hearted, but immensely satisfying when they manage to get to safety.

The Not-So-Good: Jo and Yoona’s characters don’t get much character development, except for some tidbits about their personal backstories and relationship. It’s a pity because they’re practically the main attraction of Exit, and the trailer sold it as so. The decision to plant a few supporting characters here and there for comic relief does more bad than good, sucking up some screentime that can otherwise be used to leverage more on Yong-nam and Eui-joo’s chemistry. Fortunately, apart from some misses on the writing and direction, Exit still brings quite a bit to Asian cinema.

Knock-Out Sequences: Every time the camera cuts to Yong-nam or Eui-joo climbing, you can feel the suspense and nervousness because of how well they sell it, especially Jo. Masterful camerawork adds to the tension, making this reviewer’s palm perspire during those intense scenes.

Watch Out For: Yong-nam’s first climb along the walls of the restaurant building. The other climbing sequences are pretty good too but the first one set the bar very, very high, so be prepared to go soft on your limbs.

Recommended? Yes. Exit’s take on how a disaster flick can be humorous, exhilarating, and political all at the same time is an interesting addition to the typical bleak apocalyptic disaster genre. For Yoona fans, Exit is a treat because of how much of a darling she is here and hey, it’s her first lead role in a feature movie.