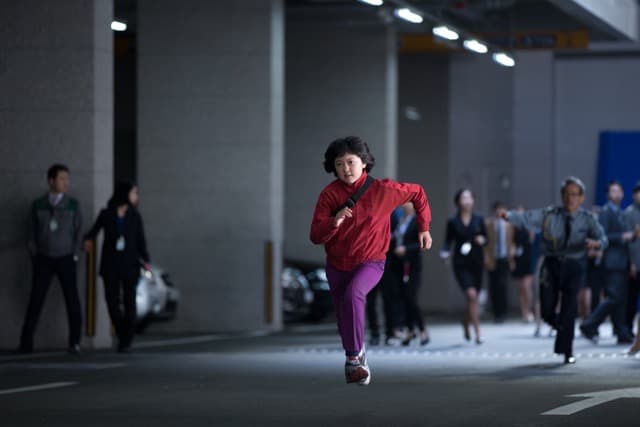 The United States-South Korea co-production is directed by Bong Joon-ho, who has ventured into monster movie territory with 2006’s The Host. Bong’s other credits include the acclaimed drama Mother and the post-apocalyptic sci-fi fable Snowpiercer.

Okja revolves around a young girl named Mija Ahn (Ahn Seo-hyun), who will stop at nothing to prevent a greedy multi-national corporation from capturing and imprisoning her best friend, who just happens to be an enormous creature named Okja. We can expect shades of Mighty Joe Young and other “a girl and her X” stories, but with a Bong Joon-ho spin. Bong co-wrote the screenplay with Jon Ronson, an investigative journalist whose book was the basis for The Men Who Stare At Goats. “With Okja I want to show the beauty that can exist between man and animal, and also the horror between them,” Bong said in a Netflix press release.

In addition to Ahn, the film’s cast includes Tilda Swinton, Jake Gyllenhaal, Paul Dano, Steve Yeun, Lily Collins, Byun Hee-bong, Shirley Henderson, Devon Bostick and Giancarlo Esposito. Prolific cinematographer Darius Khondji, whose credits include Se7en, Evita, Amour and Midnight in Paris, is the film’s Director of Photography. Brad Pitt is a co-producer, through his Plan B production house. Okja was shot in Seoul, New York and Vancouver, and will be in English and Korean.

For 10 idyllic years, young Mija (An Seo Hyun) has been caretaker and constant companion to Okja—a massive animal and an even bigger friend—at her home in the mountains of South Korea. But that changes when the family-owned multinational conglomerate Mirando Corporation takes Okja for themselves and transports her to New York, where image obsessed and self-promoting CEO Lucy Mirando (Tilda Swinton) has big plans for Mija’s dearest friend.

With no particular plan but single-minded in intent, Mija sets out on a rescue mission, but her already daunting journey quickly becomes more complicated when she crosses paths with disparate groups of capitalists, demonstrators and consumers, each battling to control the fate of Okja…while all Mija wants to do is bring her friend home.

Deftly blending genres, humor, poignancy and drama, Bong Joon Ho (Snowpiercer, The Host) begins with the gentlest of premises—the bond between man and animal—and ultimately creates a distinct and layered vision of the world that addresses the animal inside
us all.