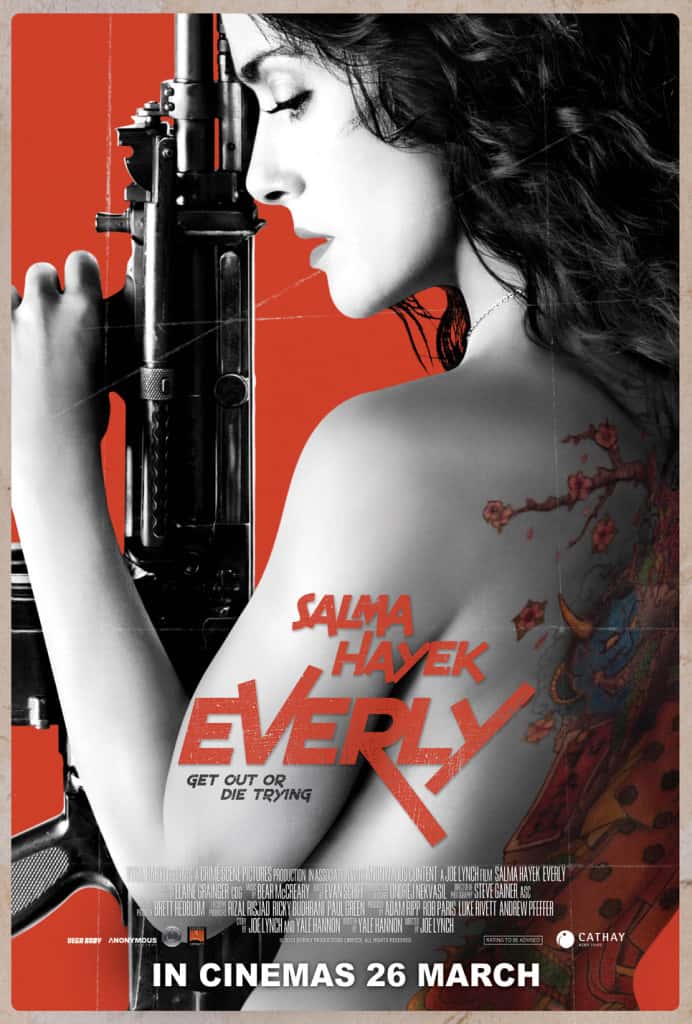 Despite being touted as “the most wonderful time of the year”, we all know the holiday season can be unpleasant. Mad rushes at malls, planning parties, spending time with relatives you’re not that fond of and so on. Everly’s (Hayek) Christmas is going a lot worse than normal. She is holed up in an apartment where she has been enslaved as the favourite prostitute of evil Yakuza kingpin Taiko (Watanabe). Everly is attacked by Taiko’s men when he finds out she has been secretly working with the police to bring him down. Over the course of the night, Everly has to endure all manner of assaults while trying to save her mother Edith (Cepeda) and five-year-old daughter Maisey (Ayamah) from the bloodthirsty criminals. 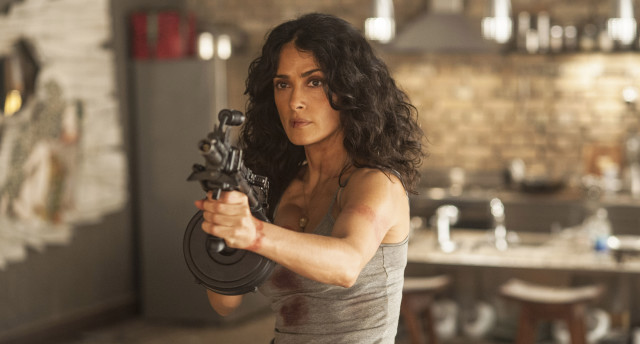 With its lone heroine battling an onslaught of thugs in an apartment complex, Everly could be billed as The Raid meets Panic Room, but that would be giving it way too much credit. Director Joe Lynch, who has a background in music videos and low-budget horror flicks, has put together an especially nasty movie that audiences are somehow supposed to find entertaining. It’s brutal and grisly, and there definitely is an audience for that, but it’s also gratuitously exploitative and artless at every turn. For something that’s meant to be a bloody, fast-paced thriller, it’s difficult to sit through and feels much longer than it actually is. There are also numerous plot holes and everyone in this does dumb things – our heroine does dumb things, the villains do dumb things and it’s just a miserable experience on the whole. Sure Everly, invite your mother and young daughter into the Yakuza stronghold. They’ll be safe there! Sure Sadist (Togo Igawa), drip acid on Everly’s bonds! That won’t help her escape at all! 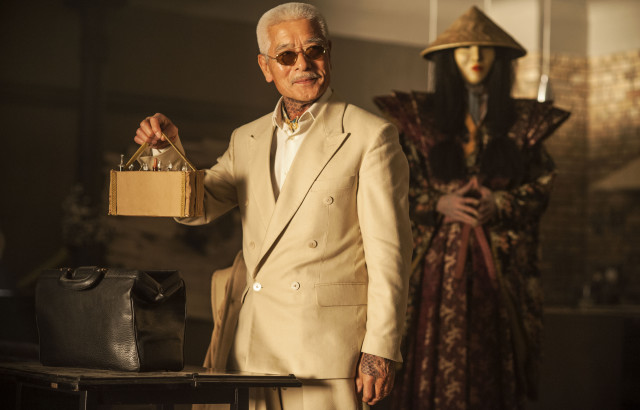 Salma Hayek is an Oscar nominee, but she also has a taste for down and dirty action flicks – after all, she is an oft-collaborator of Robert Rodríguez. Salma Hayek as a badass woman fending off hordes of gun-wielding mobsters, as well as her fellow prostitutes who are after her because of the price on her head, sounds like a reasonably cool place to start. It’s too bad that Everly flits between being confident and able to handle herself and ducking and screaming. The intent is for her to break free from her status as a helpless victim, but that progression is messy at best. There are plenty of histrionics in the scenes between Everly and her mother, seeming very soap opera-esque in spite of Everly’s insistence to her mother that “this is not a telenovela!” It also seems cheap and wrongheaded to put a young child in jeopardy, placing her in the midst of a wanton bloodbath. 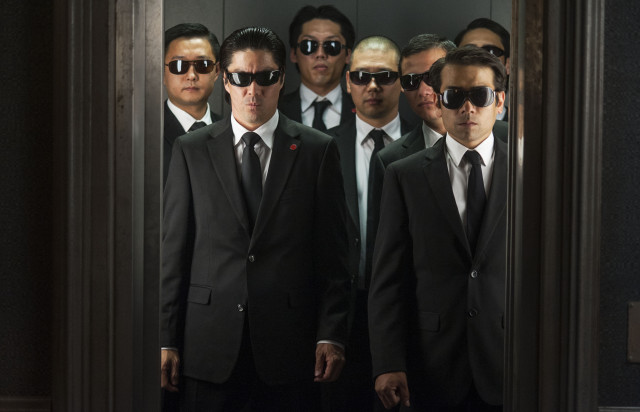 The villains are all Japanese and portrayed as stereotypically vicious. It’s just another example of that action movie trope – fall back on a foreign organised crime group as the baddies. It seems screenwriter Yale Hannon tries to compensate for this with a mild-mannered character nicknamed “Dead Man” (Kotabe) who is only doing the vile things he does out of fear of his boss and who spouts truisms like “a sanctuary sometimes exists in the eye of the storm.” It just feels so blatantly like a band-aid and is actually just another stereotype. An extended torture scene featuring the afore-mentioned Sadist is just nasty and silly rather than being genuinely frightening. Hiroyuki Watanabe does make for a chilling kingpin, but he only shows up at the tail end of the film and is saddled with contrived one-liners such as “you have only gotten so far because I have allowed you to” and “frankly, death by my sword is an honour you do not deserve.” 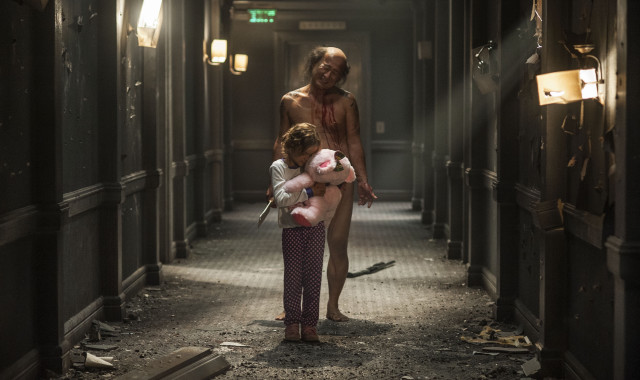 It’s gruesome, dumb and almost nauseating, but we’re sure there’ll be connoisseurs of shlock out there who’ll just love Everly. It’s actually insulting to think how engineered this is to cater to the slobbering genre fanboy, and that the result is just as repulsive as it is. At the very least, Salma Hayek is better suited to the material than Kate Hudson, who was originally attached to the part, is.