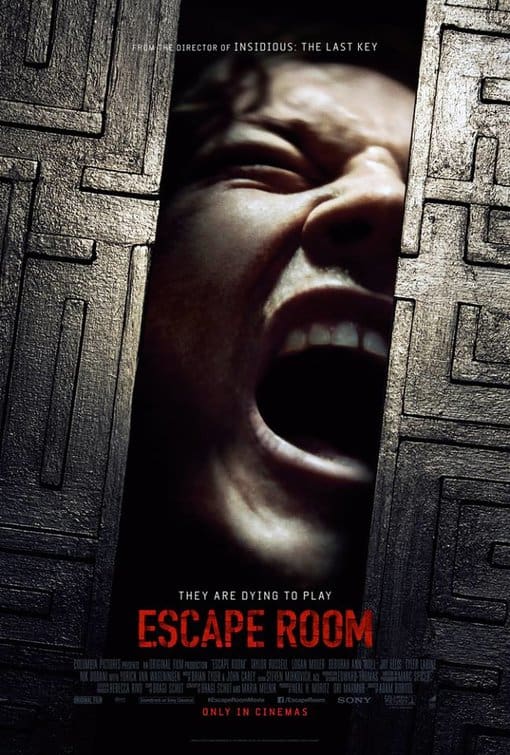 The Low-Down: What happens when an escape room game’s stakes involve death? That’s the central premise of Escape Room, the new psychological thriller film by Adam Robitel, director of Insidious: The Last Chapter. Reminiscent of Cabin In The Woods and the more recent Bad Times At The El Royale, the film is a commentary on the rising trend of real-life escape room games and voyeurism in the modern age.

The Story: Six people of completely different backgrounds each receives a black box that eventually unlocks, gathering them all in the “waiting room”. Little did they know, that’s their first room to escape. When the first person of the group dies in front of them, they realize it’s is a sick, elaborate joke to pit them against each other in a Battle Royale-esque game.

The Good: Escape Room is mostly gripping, sometimes horrific, and at times goofy, but will surely keep you at the edge of your seat. Robitel brings some of his horror flair to the life-and-death sequences, which will keep your heart thumping until the climax. The main attraction is really as its title suggests — the design of the rooms. The clues and solutions are believable and our characters’ decisions are, for the most part, sound.

The Not-So-Good: The last 10 minutes of the movie. There’s little to say without spoiling anything, but Escape Room would have been better off without a sloppy set-up for a possible sequel. Also, it feels as though Robitel is rushing through certain sequences to keep up the pace. We could have done without one of the rooms and the film would have still been great.

Knock-Out Performances: Everyone playing the main 6 “players” delivers amazing performances. In particular, though, Deborah Ann Woll (True Blood) nails her short but impactful portrayal of Amanda, ex-military suffering from PTSD. Commendable mentions include newcomers Logan Miller (Love Simon, The Walking Dead) and Taylor Russell (Lost In Space) as they give their all here.

Watch Out For: The upside-down room. It’s present in the trailer and that room is by far the most innovative of all the other levels. This is also where the crew goes crazy with the camera angles.

Recommended? Yes, but not without caveats. Enjoy the movie for its first 90 minutes without the ending sequence. The performances and execution are mostly on point, not to mention the intense sequences of our players solving the puzzles.