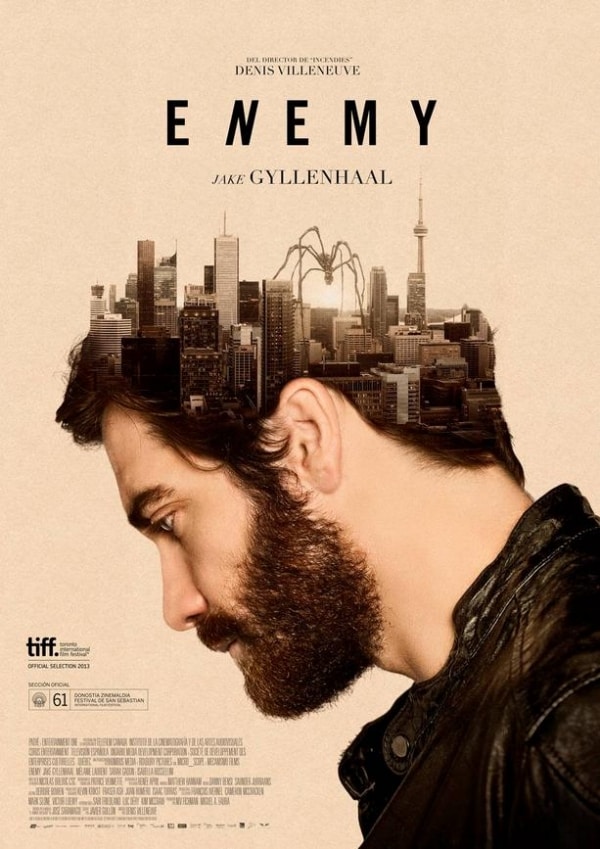 From The Prince And The Pauper through to Sweet Valley High, literature and fiction has held a particular fascination with the notion of doppelgangers: two (or more) individuals who are physically identical and yet fundamentally different, whether in personality or social station. Denis Villeneuve’s Enemy, a psychologically-charged mystery that’s more thoughtful than thrilling, explores the idea that there’s someone else in the world who shares your face but has, seemingly, nothing else to do with you. It’s fascinating, mostly, but also slow-moving and, ultimately, frustrating.

History professor Adam Bell (Jake Gyllenhaal) leads a dull, repetitive life: he lectures unappreciative kids about totalitarian dictatorships, has bursts of largely uncommunicative sex with his maybe-girlfriend Mary (Mélanie Laurent), and otherwise shuffles through the day in a lethargic haze. But everything in his humdrum existence changes when he watches an obscure movie in which, for a brief moment, he spots himself. Turns out he has a doppelganger: a not entirely successful actor by the name of Anthony St. Claire. Adam becomes obsessed with meeting Anthony, and soon their lives become irretrievably entangled.

There are many ways to play a scenario like this one: Enemy could easily have been a broad farce (just add in pratfalls and double-takes), or a heart-stopping thrill ride (mix in life-threatening cases of mistaken identity). But Villeneuve has chosen a determinedly glum, very philosophical approach to Adam’s dilemma. He frets to his mother (a nicely-cast Isabella Rossellini) about the possibility that he has a twin, and finds himself in a worryingly intimate situation with Anthony’s pregnant wife Helen (Sarah Gadon), but high drama proves elusive until the final ten minutes or so. The resulting film, soaked in shades of yellow, is moody and considered, its pace bordering on the languid as Adam stumbles through his existential crisis.

Anyone looking for easy answers or a clear message will be disappointed. Enemy is very much what you make of it: it’s packed with ideas that are never fully explored, about lives never lived and the notion of identity, which audiences can pick apart at their own leisure. In fact, the film ends just when a more mainstream, accessible version of this story might begin. The final shot is less cathartic than outright puzzling, underscoring the completely alien life into which Adam has stumbled once he chose to hunt down Anthony.

Whatever you make of the film, there’s no denying that this is some of the best work Gyllenhaal has done in his career to date. He inhabits his two characters very well, slipping into Adam’s despondent skin as easily as he finds Anthony’s brash confidence. This is really his film, but he receives capable support from Laurent, who breathes personality into a paper-thin character. She helps make it particularly intriguing that, when it really matters, Mary – despite having a less apparently happy relationship with Adam – proves better able to tell the two men apart than Helen.

Almost boldly, Enemy refuses to go down any of the routes you might expect when a man stumbles upon his exact double by chance. It doesn’t plunge into sci-fi territory, suggesting they’re clones; nor does it dip into the melodrama of hinting that they might be twins separated at birth. Instead, it baldly states the fact – there are two men with Gyllenhaal’s face in the world – and drifts after the revelation in a determinedly arthouse manner, refusing to tie up any loose ends or offer any simple conclusions. It makes for a compelling film, if not a particularly satisfying one.

Summary: Smart and intriguing, but so resolutely oblique that it’s hard to really care about how (oddly) it ends.