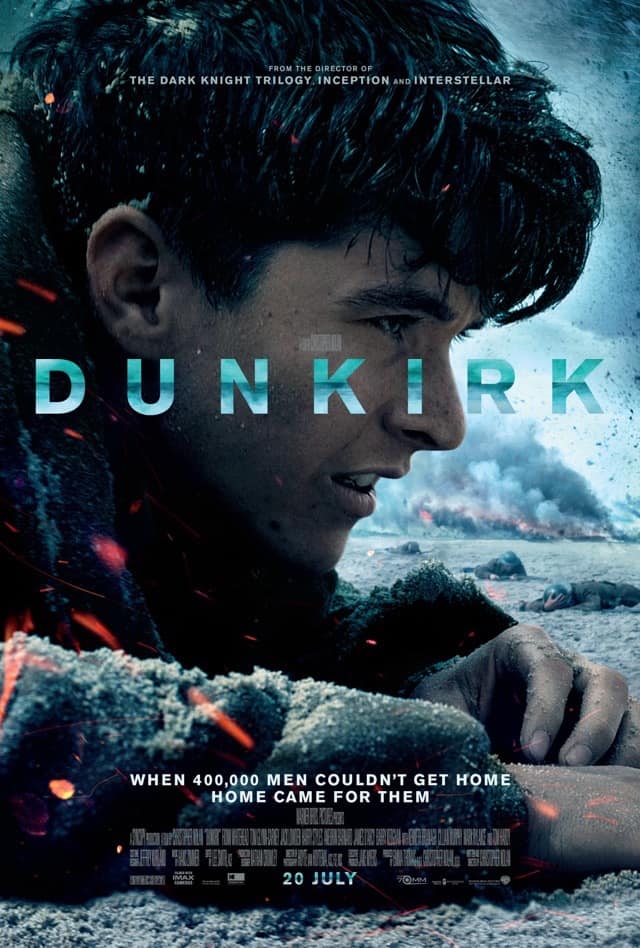 There have been plenty of films set during the Second World War, and plenty of excellent ones at that, but you’ve never seen a war movie quite like Dunkirk. It is May 1940, and 400 000 Allied soldiers from Britain, Belgium, Canada and France have been trapped on the beaches of Dunkirk, France, by German forces. With the waters surrounding the beach too shallow for naval vessels, hundreds of small personal craft are called into service to evacuate the soldiers from Dunkirk. British Army private Tommy (Whitehead) is just trying to get home, while Commander Bolton (Branagh) and Colonel Winnat (D’Arcy) oversee the evacuation on the ground. Making his way to Dunkirk in his boat is Mr. Dawson (Rylance), accompanied by his son Peter (Glynn-Carney) and Peter’s best friend George (Keoghan). On the way to Dunkirk, they pick up the Shivering Soldier (Murphy), a shell-shocked survivor of a German U-Boat attack. In the skies overhead flies Farrier (Hardy), a Royal Air Force Spitfire pilot warding off attacks from German fighters. As time runs out for the soldiers stranded at Dunkirk, all they need to be victorious is to survive.

The very notion of Christopher Nolan writing and directing a WWII movie sent expectations for Dunkirk sky-rocketing. The film has lived up to, and maybe even surpassed, those expectations. Cutting through the stodginess that can sometimes plague period pieces, Nolan delivers something revelatory. There’s no glamour, no romance, no treacly sentimentality, no pomp, no circumstance – from the opening moments, viewers are plunged into the thick of unspooling chaos, trapped alongside the film’s characters in a variety of panic-inducing circumstances.

Taut and running a lean 107 minutes, unusual for a movie of this type, Dunkirk unfolds with searing immediacy. Dunkirk is not about the strength and sheer might of its heroes – Winston Churchill characterised the events that led to the stranding of the 400 000 Allied soldiers at Dunkirk as a “colossal military disaster”. Dunkirk is not a chest-thumping ode to a bygone age of ‘true heroism’, nor is it a withering, cynical proclamation that ‘war is hell’. It’s not making any grand statements, it’s transporting the audience into situations so hopeless and so desperate that they’ll be gasping for air.

Putting the film together was a staggering logistical undertaking, and Nolan waited to accrue experience making large-scale blockbusters before tackling this film, which he has wanted to make since he was a student. Nolan makes the massive scope of the film digestible for audiences by dividing Dunkirk into three perspectives: the land, the sea and the air. The Germans are a faceless enemy, making their presence felt through the ordnance they bombard the beach with. With each cluster of protagonists having clear objectives to complete, Dunkirk is easy to follow, and doesn’t contain unwieldy stretches of exposition.

Hoyte van Hoytema’s cinematography provides both the breathless immersion of being stuck below decks in a sinking ship and the soaring majesty of Spitfires tearing across the sky, an expanse of ocean beneath the planes. Hans Zimmer’s frantic score contains no lush, sweeping melodies, incorporating interesting textural elements including the ticking sound of Nolan’s own pocket watch.

Another thing that sets Dunkirk apart from its prestige drama ilk is that there are no showy performances finely tuned for maximum Academy appeal. Make no mistake, the acting is excellent, it’s just that it doesn’t call attention to itself and character back-stories and motivations are deliberately scarce, so we can focus on the moment. It’s unusual that a thespian of Branagh’s calibre is given relatively little to do, but it works. Newcomer Whitehead aptly captures the wide-eyed innocence and desperation of a young soldier swept up in a colossal conflict, while Harry Styles, to his credit, is barely distracting.

Murphy’s turn as the PTSD-stricken Shivering Soldier, who is otherwise unnamed, is probably the closest thing Dunkirk has to a virtuoso turn, and even then, it isn’t overplayed. Rylance showcases the masterful restraint he’s become known for, his character embodying the quiet, everyday heroism displayed by the mariners who came to the soldiers’ rescue. While Hardy is at his best when playing antiheroes, roguish types or straight-up villains, but he’s easy to root for as the pilot who tries to save the day.

Stripping away the stylistic trappings often associated with WWII epics, Nolan shapes Dunkirk into a film that’s visceral and affecting, but is also spectacular and deserves to be seen on as large a screen as one can find. While it’s not the easiest film to watch, Nolan skilfully refrains from gratuitous blood and gore – it’s horrifying without being unnecessarily so. Because of its heavy subject matter and the tension with which it is brought to life, Dunkirk does feel longer than its running time and is not necessarily a film that begs to be re-watched immediately, but it is an effectively harrowing masterpiece all the same.

Summary: A war film that evokes helplessness and desperation like few before it, Dunkirk will thrill, shock and shake audiences to their core.