Directed by renowned Hong Kong director Daniel Lee, and executive produced by and starring Jackie Chan, Dragon Blade is a highly-anticipated 3-D blockbuster scheduled to open on Chinese New Year’s Day, in Feb 2015. Today the production team launched seven posters, a teaser poster and six character posters that unveil the mysterious look of the film. These are also the first official publicity materials that have been disclosed to the public.

The first teaser poster is an outline of the plot. Dragon Blade tells a story happened in the Han Dynasty in China. Huo An, the Commander of the Protectorate of the Western Regions (played by Jackie Chan) dedicates himself to keeping the peace between the tribes that inhabit the Western Region. He has formed a peacekeeping squad with his closest comrades. However, they are framed for corruption and sent to the border, to work as slaves. Meanwhile, General Lucius of the Roman Empire arrives, escorting his ward, who is escaping persecution in Rome. Starting as enemies, Huo An and Lucius eventually become sworn brothers, creating a thrilling legend. 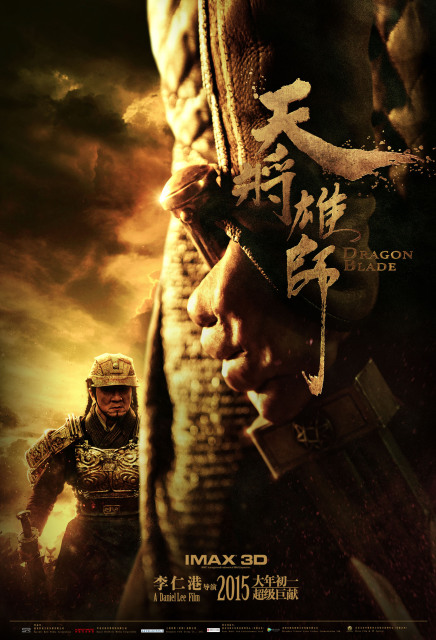 At the forefront of the teaser poster is a hand holding a Roman sword. Huo An, played by Jackie Chan, is seen standing behind the sword in golden armour. Against the background of a desert, he looks serious and alert as if he is about to take on an unknown and daunting challenge.

All six posters have a solemn black background. Amongst them, the three male leads have very different personalities, but all demonstrate the kingly power they possess. Holding a knife in his hand, Jackie Chan looks calm while John Cusack frowns, lowering his head, as if he has just returned from battle; wearing a fur cloak, Adrien Brody casts his eyes down in silence.

Korean super pop star Choi Si-won takes up the role of Huo An’s right-hand man. Shrouded in enigma, it makes us eager to find out more about his enigmatic character.

Actresses Lin Peng and Wang Ruoxin are cast as the great loves of Huo An; one is a great tribal fighter while the other is more ladylike , reflecting their respective roles as a fierce warrior and a conscientious school teacher.

Dragon Blade will be released simultaneously across Asia on 19 February 2015 (The first day of Chinese New Year).